None in Sridevi class when it came to acting

The passage of time is the medium that crated this sense of national loss at the passing away, at a relatively young age of 54, of Sridevi.

India may not have grieved like this for anyone since the assassination of Mahatma Gandhi and, maybe, Indira Gandhi. Maybe, the passage of time is the medium that crated this sense of national loss at the passing away, at a relatively young age of 54, of Sridevi. It was her untimely demise in a foreign land that seemed to trigger this mass outpouring of grief without parallel in India as it took place in the era of media saturation of the visual and print variety and the social media to boot, which is the great collective of ‘fake news’ and false news in the post-modern era.

Of course, the death did lead to the crossing of all limits of salaciousness as rumour followed speculation followed Chinese whisper. The great TRP war led to each television channel trying to outdo the other and many went to the extent of suggesting murder. Not to speak of India’s supreme conspiracy theorist who also spouted the opinion that Sridevi was done away with by Dawood & company, since the location, so very conveniently, was Dubai in the UAE. There was even a mention of ‘injuries on her body’ by a TV channel, a headline that died instantly never to come up again. 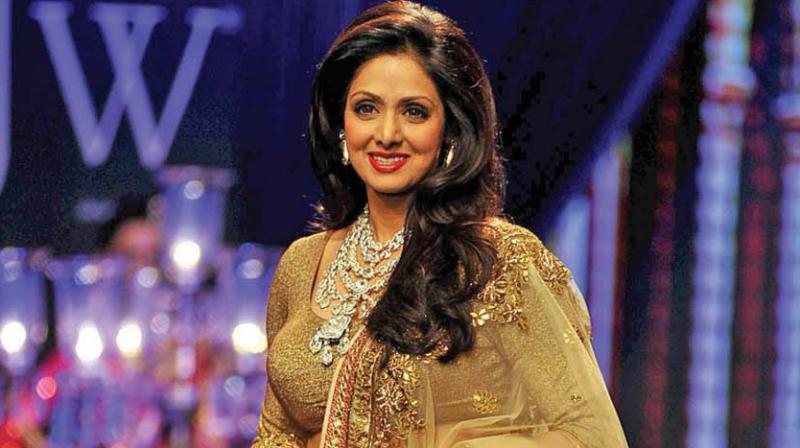 From the time she died and India started getting calls early on a Sunday morning to the moment she was cremated, there was media coverage the likes of a Mandela, South Africa’s Gandhi, were not honoured with. There were also the reports linking her health, her looks and her figure to a premature death with several inspired guesses about her penchant for cosmetic procedures being the cause. A very informed source did, however, link her death to a possible stroke caused by a fat-burning procedure one of whose side effects could be a stroke.

It is sad but that was a choice she made and she had every right to make those choices in leading her life the way she wanted to. It was her life and its cumulative happiness versus the sum of its sadness is something no one could have known but herself. The cause of death may have been a stroke triggering her death by accidental drowning while she was in the bath. Any traces of alcohol in her blood could have been there from a drink which may have been sipped at a wedding event just hours earlier, or from medicines for cough and cold even.

Again, it was her choice and her right to drink or not. What right did anyone else have to be judgmental about this? And who has the right to vilify women who drink as if we are living back in the era of the Ramayana where virtuousness in women was the sole defining quality of life? This wave of ‘holier than thou’ attitude seemed to grip the nation to the very end, including in condemning those who got dressed up in white for the funeral. They did so because Sridevi had written down her wish that white should be the dominant colour at her funeral.

Why should we be judgmental about women wishing to look good in public? It’s no crime and they are all in the movie business, which means the way they present themselves is an ingrained part of their lives. And we would like to remember what an actress Sridevi was in her career and not what they had to do with her mortal remains in embalming after her post-mortem and death.

The memories of the roles she played, the characters she portrayed will stay in memory for longer than even the massive sense of loss at her passing, exacerbated by the suddenness of it. Her pairing with Kamal Haasan - another child star like her who made his debut at an impossibly young age before graduating into bigger roles and then making it as lead too - made for the best movies in which they stood out as actors portraying tender emotions in a most natural way.  Sridevi was simply brilliant in front of a camera. Only those who knew her well could attest to her basic shyness, but in her public persona she was the bubbly effervescent actress who could instantly transform herself into her characters.

There were many from the South who went to Bollywood - Waheeda Rahman, Vyjayantimala, Padmini who was the leader among the three Travancore sisters, Rekha, Hema Malini - all of them stunningly beautiful women who were expressive as actresses and many were great danseuses too. But quite no one was in the same thespian class as Sridevi whose talent unfolded in front of the camera like a free-flowing river bursting out of a dam. The equally brilliant Kamal Haasan made it a thespian double in movies we cherished in our youth.