Akshay Kumar lashes out at molesters

DECCAN CHRONICLE.
Published Jan 5, 2017, 10:17 pm IST
Updated Jan 6, 2017, 6:13 am IST
He shared a video on Twitter, a generic address to everyone in the wake of the immense umbrage after the incident got reported.

Akshay Kumar has reacted sharply to the ghastly molestation of women in Bengaluru on New Year’s eve. He shared a video on Twitter, a generic address to everyone in the wake of the immense umbrage after the incident got reported.

“The Bangalore incident makes me feel we are evolving backwards, from humans to animals, rather beasts because even animals are better! Truly shameful, (sic)” he tweeted.

Over 100 women were molested and harassed by drunken revelers in the IT capital of India, in the presence of police personnel, who were helplessly outnumbered. 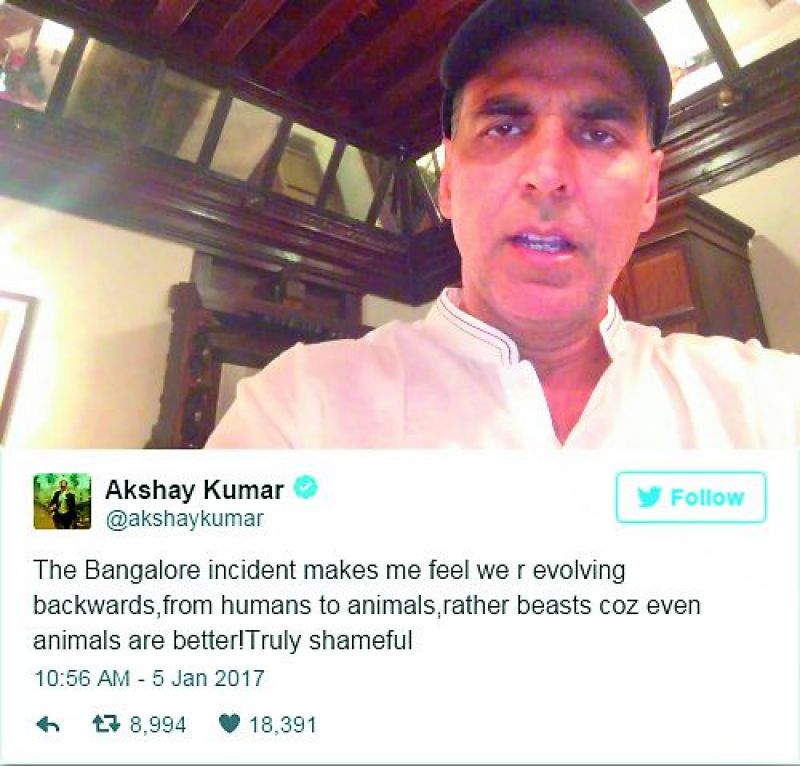 “I was returning from my New Year’s vacation with my four-year-old daughter in my arms when I learnt about the molestation incident in Bengaluru.

“I feel if a society cannot respect its women, it doesn’t deserve to be called a humane society. What’s most disgusting is that people have the guts to justify such shameful acts by criticising women for their choice of clothes,” Akshay said in the video.

“Why did the girl wear short clothes? Why did the girl step out late night? I want to tell them that the girls’ clothes are not short but your mind is,” the 49-year-old actor said.

Expressing his disappointment, he warned the perpetrators of severe backlash if they do not mend their ways.

Akshay also conveyed a message to girls asking them to be strong. He asked them to silence every detractor who bashes the way they dress. However, he also cautioned them to be alert all the time and learn martial arts in order to defend themselves against such criminals. “Women should not consider themselves inferior to men... Just be fearless, be alert and learn self-defence,” he concluded.