Model calls Hrithik a ‘friend and mentor’, but he has no clue about her existence

The two have shot few ads together.

Mumbai: There’s no denying the fact that Hrithik Roshan shares an amazing chemistry with all his on-screen leading ladies. Reason why he is often linked up with his co-stars every now and then. When ‘Kites’ came out, the town was talking about Hrithik’s growing fondness towards his co-star Barbara Mori and now, a recent report suggests that a model named Angela Krislinski is the new Barbara Mori in the actor’s life.

However, the actor soon took to his Twitter account and slammed the reports. Apparently, Hrithik Roshan did a few ads with Angela Krislinski a year ago.

Hrithik, who has shot numerous ads with many models, has no recollection of her, so just like Kangana Ranaut, did Angela also ‘imagine’ things that didn’t exist as well?

In an interview to DNA, Angela recalled how Hrithik remember her and called out to her. “I was under the impression that he had forgotten me. After all, he is a star who shoots umpteen ads with several young models. But he called out to me and remembered all the conversations we’d had and the fact that my dad was from Valencia. He also asked me jokingly whether the colour of my eyes was real. When I signed a movie in the South. He also inquired about the maker and assured me that this film would definitely take me places,” she said.

She went further ahead and expressed how she has found friend and mentor in Hrithik Roshan and that the actor liked her performance in ‘Size Hero’. She said “I consider Hrithik a mentor and keep him informed. I showed him a song from my last south release, Size Zero and he liked it immensely. Later, I even sent him the first look and trailer of my upcoming film Rogue and he was impressed.”

However, when Hrithik read the newspaper in the morning, he was anything but ‘impressed’. The actor soon took to Twitter to wash off his hands and tweeted a picture of the article, “My dear lady, who are you and why are u lying.” 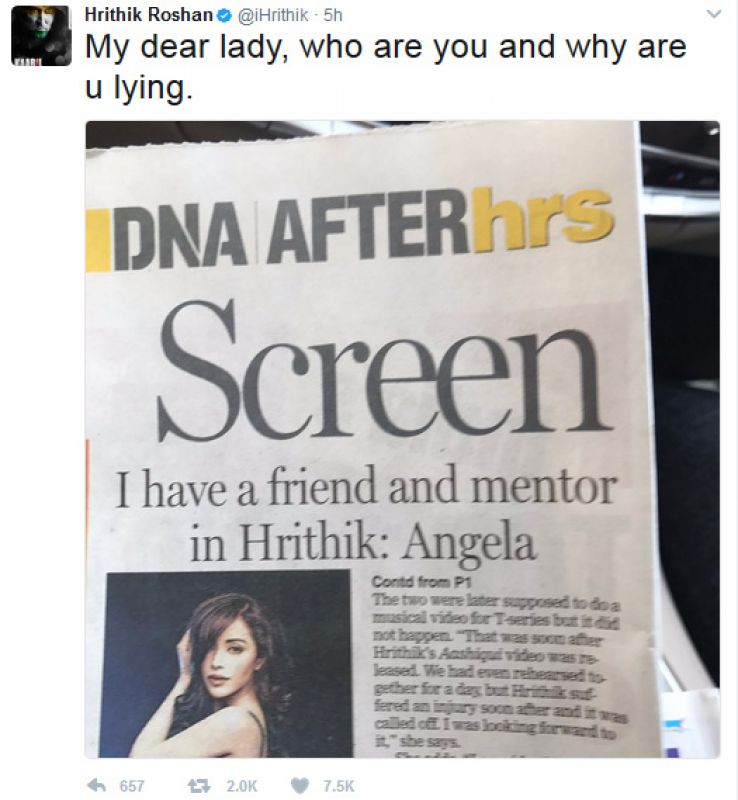 In the same interview, Angela also talked about having a huge crush on Hrithik. “Like every other newcomer, I had a crush on Hrithik when I worked with him for the first time in a commercial. When I told him about my half-Spanish background, he was reminded about the old-world charm of Valencia and Spain. He was supportive and gave me acting tips.”

Not only that, but Angel also said that she shares her insecurities with the actor, who is extremely supportive of her. “I told him it would be difficult for me to access filmmakers and get the right roles in Bollywood because of my international looks. He assured me that it was all about confidence and asked me to work on my acting skills and Hindi diction. That conversation with him changed my life.”