Fans had nothing but appreciation for Neena Gupta after she posted a powerful video on social media, giving advice based on her personal experiences. (Photo: ANI)

New Delhi: Fans had nothing but appreciation for Neena Gupta after she posted a powerful video on social media, giving advice based on her personal experiences.

The actor who is currently at Mukteshwar, Uttarakhand, on Monday as a part of her 'Sach kahun toh' series of posts, updated a new video on Instagram where she recalled some accounts from her past and laid emphasis on not getting involved with a married man.

The 60-year-old actor began the video by saying, "Sach kahun toh kuchh aise dialogues hain jo main apko sunaungi." She then spoke at length about how getting involved with a married man eventually leads to nowhere.

Toward the end, she asked her 'friends' to try not to fall in love with a married man.

"Do not fall in love with a married man, I've done this before, I've suffered..that is why I'm telling my friends...Try not to do it," said Neena Gupta.

The video grabbed the attention of many and scores of favourable comments poured in.

An Instagram user commented on the actors' bravery for sharing her personal experience on social media.

"That's really courageous to share your story with a moral," the user commented.

"Admire how easily you speak out your heart with simplicity and complete honesty," read another comment. 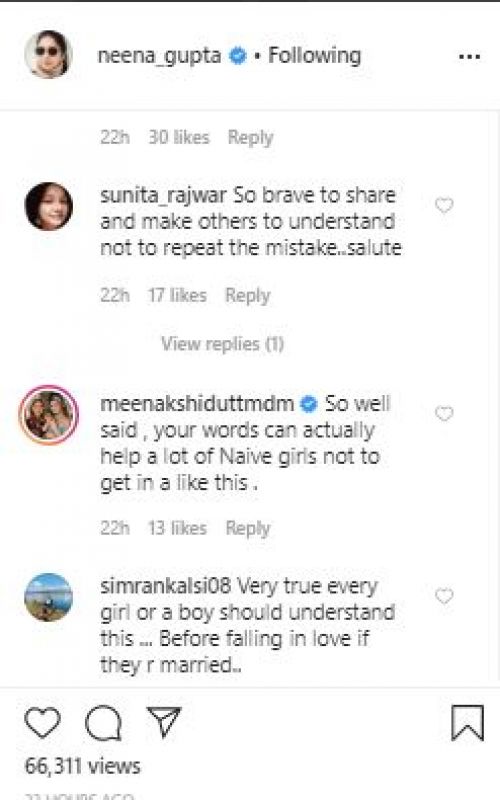 Meanwhile, a user who considers the actor as an 'inspiration', wrote: "Such trivial thing put in such simple words and with such sincerity that it is amazing ... You are an inspiration ma'am."

The 'Shubh Mangal Zyada Savdhaan' actor is quite active on social media platforms and has 395k followers on Instagram to date.

Gupta was in a relationship with former West Indies cricketer Vivian Richards with whom she had a daughter, Masaba, in 1989. Vivian Richards later married Miriam while the actor entered wedlock with chartered accountant Vivek Mehra.