Priyanka Chopra on 'The Late Show with Stephen Colbert'

Mumbai: After making her appearance on several American talk shows, Priyanka Chopra has finally made her debut on 'The Late Show with Stephen Colbert'.

The makers of the show teased their audience by sharing a Boomerang video of the 'Quantico' star, from the back stage, draped in a class black dress. Their post read, "YES! The amazing @PriyankaChopra from #Quantico joins us tonight for some big laughs with @StephenColbert on #LSSC."

YES! The amazing @PriyankaChopra from #Quantico joins us tonight for some big laughs with @StephenColbert on #LSSC.

The makers also shared a still picture of the beautiful actress posing under the spotlight. 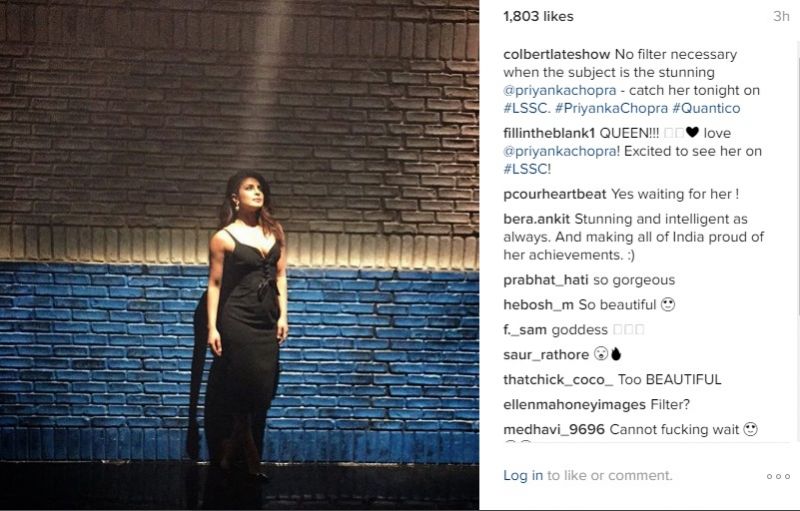 Priyanka has once again managed to amuse her fans with her outspoken persona by stressing on a current affair. The makers of the show have shared a funny GIF image where the lady seems to be indirectly hinting at Trump's immigration ban by talking about her visa.

‘I’ve got to watch what I say, I’m here on a Visa.’ - @priyankachopra 🐸 #LSSC pic.twitter.com/QMEWYLR9qd

The makers also shared another GIF image where the actress is exhibiting a western move with a caption that reads, "Priyanka Chopra went back to India with a NY accent. #LSSC."

Priyanka Chopra went back to India with a NY accent. #LSSC pic.twitter.com/rfPm2Wyper

Priyanka will be next seen in her first Hollywood film, 'Baywatch' alongside Dwayne Johnson and Zac Efron.