Mumbai: Abhijeet Bhattacharya has not been mincing words when it comes to putting his borderline jingoistic perspectives across.

The 90's singer, who lost prominence with the advent of younger and more adored voices, has been resorting to his social media platforms to vent and opine on everything under the sun.

Abhijeet, who had come out against Karan Johar, Mahesh Bhatt and the Khan triumvirate for giving Pakistani artists an opportunity to work in the industry, is at it again.

Karan, whose 'Ae Dil Hai Mushkil,' is up for release had been subjected to some serious flak for having cast Pakistani heartthrob Fawad Khan in his film. Major parties like the MNS, BJP and Shiv Sena asking for a blanket boycott of Pakistani artistes, and asked Karan to completely edit out Fawad's portions from the film.

Karan, while under all the heat had revealed that his popular television show's latest season won't be kickstarting with Fawad Khan, contrary to popular notion.

Abhijeet took the opportunity to refer to him as 'Mrs. Fawad Khan' and say that the filmmaker is depressed at having been snubbed by the Pakistani actor. 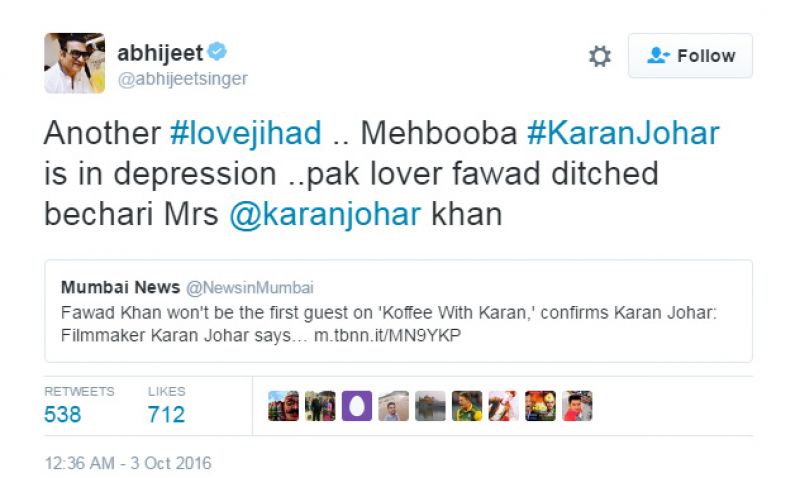 The unsavoury comments have become characteristic of the erstwhile infamous singer known to dole out profanely worded opinions.

Abhijeet had also come out againstsuperstar Salman Khan for supporting Pakistani actors, branding him as 'Anti-India'.

The singer, with his loose tongue, has been offending one too many and seems to be in no mood to stop.