'Get your damn facts right before spewing s***': Malaika lashes out at a troll

Mumbai: Actress-producer Malaika Arora is one of the most snapped celebrity by the paparazzis. Whether it’s her outing with her girl-gang or with her ex-husband Arbaaz Khan’s ‘Khan’ family, she often gets clicked by the media as she’s dearly loved by the viral world.

The sexy siren is frequently followed by the shutterbugs on her way to salons, boutiques and outside gym, where the actress sweats it out to get into the voluptuous shape that she is in right now. The ‘Munni badnaam hui’ actress heads off to exotic locations for vacations and keeps her fans updated on Instagram (an app which she swears by), where she’s got a whopping 4.3 million followers.

As we know, social media is a ruthless world and never leaves an opportunity to troll anyone. The latest victim of internet trolling is Malaika, but the diva lashed out at the troll.

A Mumbai-based photographer recently posted a picture of the actress on Instagram, and it had a comment saying, “This what these sh** women do these days. Marry a rich guy then divorce him for huge alumni. And then have fun with that alumni. Why do u need alumni if u are capable of earning. I respect people and not the gender. Life now is all about wearing short clothes, going to gym or salon, enjoying the vacation. Do u seriously have any work, Or just feeding yourself on the husband's money? The word is alimony." 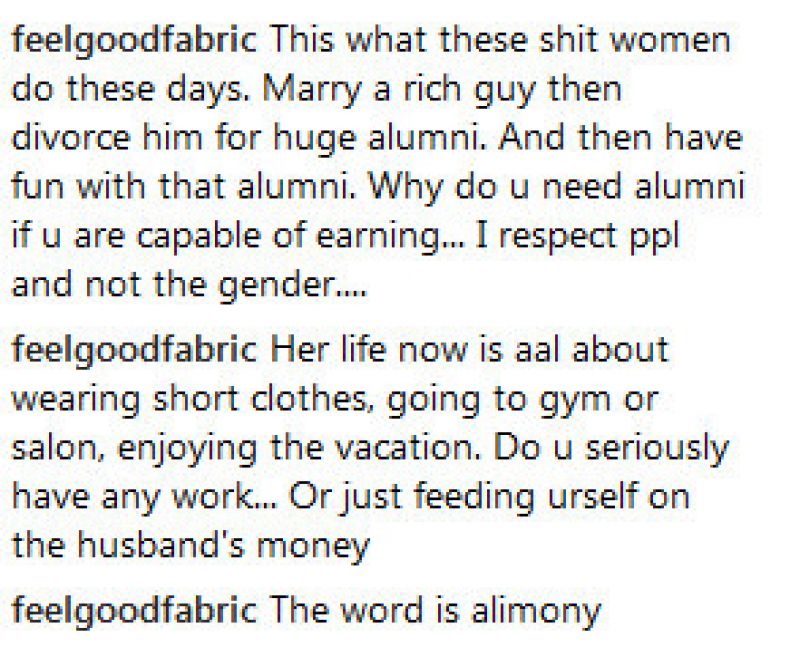 Malaika, who generally doesn’t pay heed to such trolls, couldn’t control her rage and lambasted the person saying, "I do not indulge in such conversation coz it's below my dignity, but I jus had to coz u certainly got to get your damn facts right before spewing s***  n slagging me off when u know nothing about me. Except sit and pass judgement on other people's life, I seriously suggest you find something to do with ur time coz you clearly have nothing better to do in life." 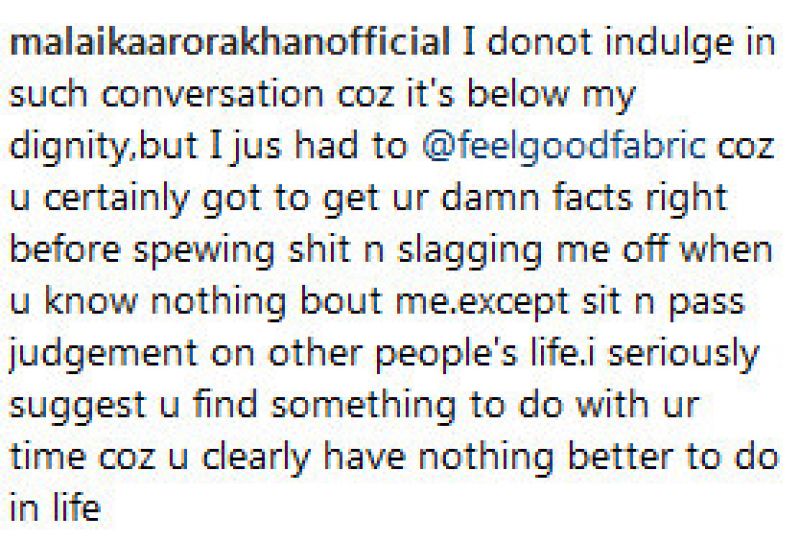 Just last year, Malaika Arora and Arbaaz Khan announced that they were heading for separation, and were granted divorce few months ago, a day prior to Justin Bieber’s concert in Mumbai, where they escorted with their 15-year-old son Arhaan Khan.

■Inside Pics: Ex-couple Arbaaz-Malaika, Iulia, others spotted at Salman’s Eid affair
■Ranbir-Katrina, Malaika-Arbaaz: Ex-couples hang out with each other
■Arbaaz Khan wants Malaika Arora in Dabangg 3
■Sara and Malaika are new workout buddies as they have fun in the gym