SRK had earlier revealed that Abram was a big fan of Spiderman.

Mumbai: Gauri Khan might just have proved she is the best ‘mummy’ in the world!

Shah Rukh Khan’s spunky better half revealed her quirky side while sharing an adorable picture of her along with her youngest munchkin AbRam.

Shah Rukh Khan had recently revealed that AbRam is extremely fond of Spiderman and is eagerly awaiting the release of the upcoming film, ‘Spiderman: Homecoming’.

However, seems like AbRam has another obsession and it’s Tom Cruise’s highly anticipated upcoming summer flick, ‘The Mummy’.

Gauri, who recently designed an adorable nursery for Karan Johar’s twin babies, wrapped herself round toilet paper, role-playing as a ‘Mummy,’ much to the delight of AbRam.

Well, with so many warm fuzzies filled into a single photograph, we can barely contain ourselves. 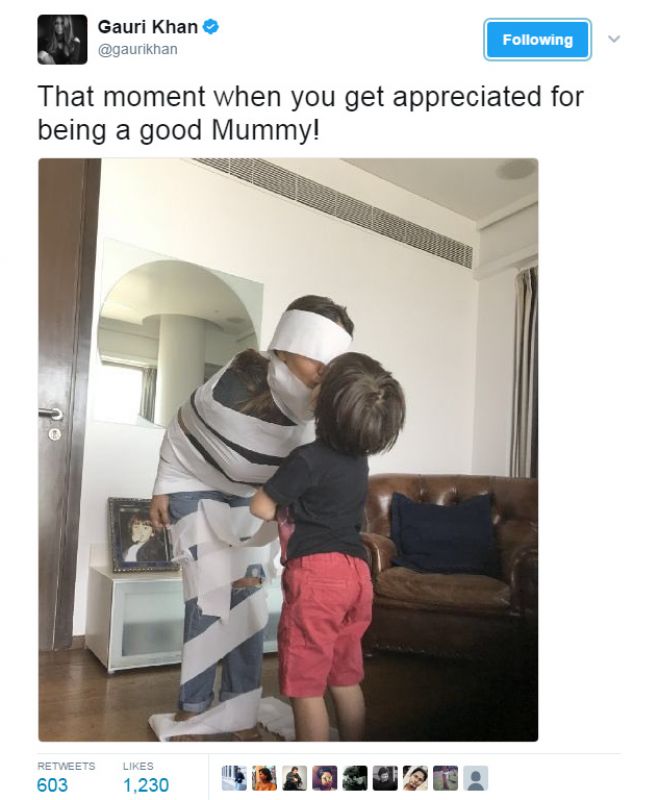 Shah Rukh, who had a hit in ‘Raees’ early this year, will next be seen in Imtiaz Ali’s next, which is all set to clash with Akshay Kumar’s ‘Toilet: Ek Prem Katha’.