Salman Khan, who was accused of being 'anti-India' among numerous other things, is yet to comment.

Mumbai: On social media, Abhijit Bhattacharya has expressed his displeasure over Salman Khan opposing the ban on Pakistani artists. The singer not only criticised the superstar but went on to accuse him of supporting terrorism and being disloyal to the country.

On Saturday, the ‘Bajrangi Bhaijaan’ star voiced his opinion on Maharashtra Navnirman Sena’s (MNS) 48 hours ultimatum to Pakistani actors to leave India and the recent ban on Pakistani artists working on Indian soil. Salman was quoted as saying, “They are artists. What do you think…Are artists terrorists? They come to India with visa. Who gives them the visa? Our (Indian) government gives them a visa. The government gives them the work permit.”

It was Salman opposing the ban that allegedly infuriated Abhijeet. He took to Twitter and, in a series of tweets, accused Salman of being anti-India and a supporter of Terrorism.

Bhattacharya on Saturday tweeted: “Pakistani and Indian artists have one thing common, both enjoy India’s money, love, fame and both are anti-India anti-Indian Army #SalmanKhan. 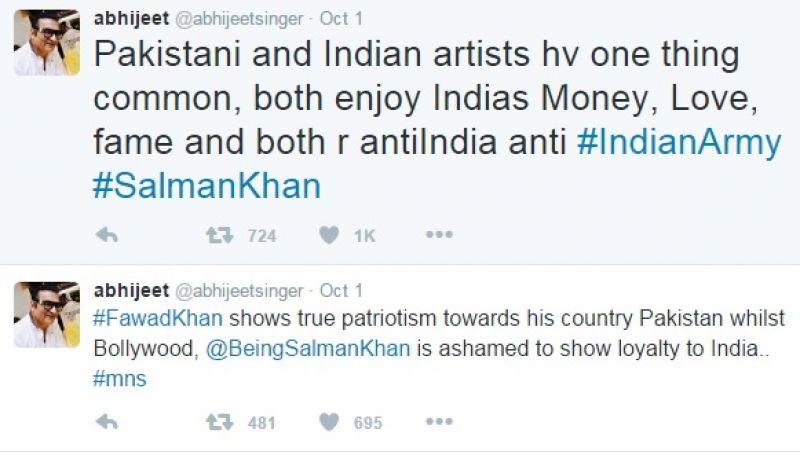 Abhijeet went ahead and accused Salman of being too busy shooting movies with Pakistani actors. When a fellow Twitter user supported his views, the singer brought up the 2002 hit-and-run case Salman has been acquitted of.

“Superstars don’t watch news of #UriAttack #Pakistan killing, shooting, butchering Indians, they are too busy shooting with Pakis”, he said.

"Earn in the country, drink and party, crush people, kill a deer, show loyalty towards Pakistan while being a traitor to your country. I feel embarrassed that I once took his side, even though people bashed me for that," further added the singer.

In the wake of Uri attacks, MNS, which had given a 48 hours ultimatum to all the Pakistani actors to leave India forcing actors like Fawad Khan to leave, has reportedly condemned Salman’s comments on the issue and even threatened to ban his films. Shiv Sena MP Sanjay Raut had reportedly asked Salman’s father to keep him in house arrest as he blabbers too much.

MNS President Raj Thackeray, who was not pleased with Salman's views either,said, “these artists (Salman) should realise ‘Nation first’. If they have so many problems, we will ban their movies too.”

The Indian Motion Picture Producers’ Association (IMPPA) has recently banned Pakistani artists and technicians from working in India until normalcy returns. The organisation said that it was unhappy with Pakistani actors not condemning the Uri attacks which eventually led them to take the extreme step.

Pakistan, on the other hand, has reportedly banned all Indian channels with effect from October 15. The cinema halls in Pakistan have already stopped screening Indian movies to express solidarity with Pakistani Army.