Sanjay Gupta had questioned why Shah Rukh wanted to restrict his own film's business during the 'Raees' versus 'Kaabil' clash.

Mumbai: The clash between Shah Rukh Khan’s ‘Raees’ and Hrithik Roshan’s ‘Kaabil’ at the box office this Republic Day was not an amicable one and team of the latter were especially upset over the former announcing the same release date despite their announcing it first.

Moreover, the decision of the distributors in the allocation of 60: 40 screens in favour of ‘Raees’ was all the more difficult for ‘Kaabil’ team to digest, which led to several unpleasant exchanges between the two teams.

While ‘Kaabil’ still managed to do well at the box office, the film would have done a lot better, if not for the clash with ‘Raees.’

However, this time Shah Rukh Khan’s film, directed by Imtiaz Ali,  faces a similar situation like ‘Kaabil’, as the makers of Akshay Kumar’s ‘Toilet- Ek Prem Katha’ have pushed ahead its release date and will now clash with the SRK-starrer during the Independence Day weekend (11 August).

‘Kaabil’ director Sanjay Gupta took the opportunity to take a dig at Shah Rukh Khan over the clash, hinting at how Karma hit Shah Rukh and tweeting ‘Kartam Bhuktam on Independence Day.’ 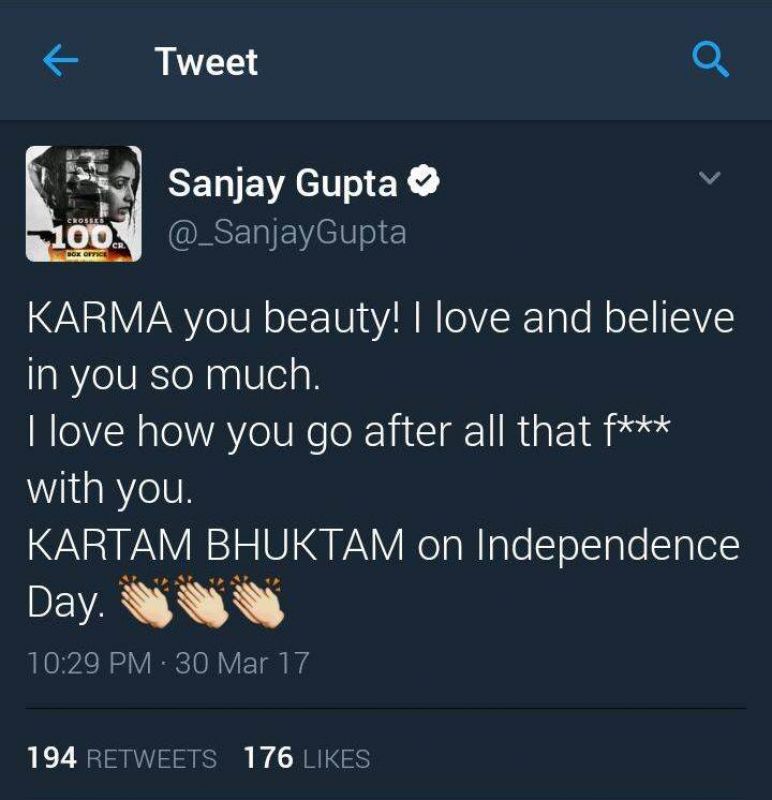 The director apparently got trolled for his tweet by Shah Rukh’s fans and deleted his tweet later on.

It seems the saying 'forgive and forget' does not come that easily to some celebrities from the industry.