Not without my fans, says King Khan during Fan's trailer launch

The trailer launch of Shah Rukh Khan’s Fan was one of the most awaited events ever since the film was announced. And Khan with his massive entourage and grand scale, lived up to the hype.

Fan’s trailer was launched in the presence of thousands of Shah Rukh Khan fans at at the YRF studios on Monday night. The film, which is slated to release on April 15, tracks the journey of a fan that turns antagonistic after being snubbed by his idol. We bring you the highlights of the grand event:

Inside YRF premises
For the first time, Yash Raj Films made an exception of allowing outsiders — the aam aadmi — inside the premises. Speaking about the move, Shah Rukh Khan said while addressing the huge gathering, “Aditya Chopra, the producer of the film and the karta dharta of YRF, is an extremely inspiring and a wonderful young boy".

"He had decided to keep the launch of Fan on February 29 because it comes once in four years. And it’s also for the first time that people who were not part of film, have been invited".

"YRF security is so high, that even actors are thoroughly checked before they enter the premises. Something like this is happening for the first time and it is because Adi loves me and he knows how much I love you.” 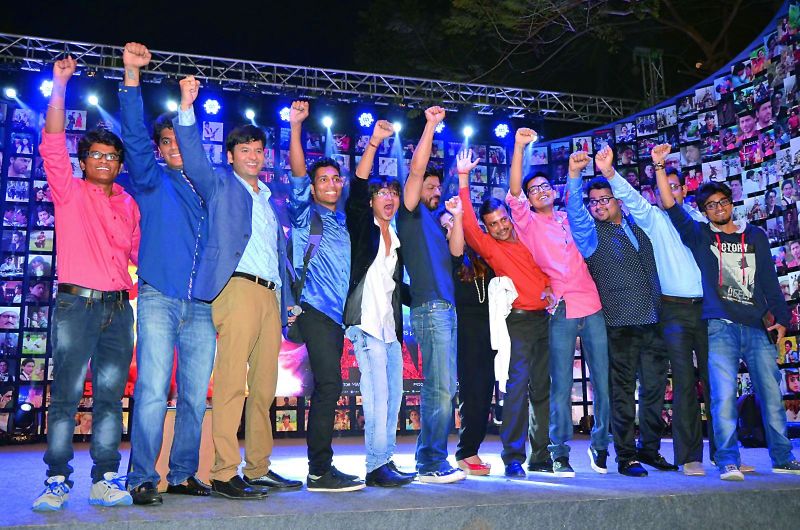 Shahrukh Khan with his fans during Fan trailer launch

Safety of the girls
Considering the gathering was so massive SRK and his team took special measures to ensure that the women were safe. There were separate areas demarcated for the girls and boys.

And King Khan in his true witty style said, “This seems like a YRF movie itself — like how in a party the girls and boys are on either side. We did that because we don’t want the boys to get trampled upon by the girls because the girls are tougher here.”

The fan who cried
A girl who seemed to be in her 20’s was standing behind the barricade for over two. She was crying bitterly. A security guard informed Shah Rukh that the girl was waiting to embrace the star. Shah Rukh asked the security to bring her backstage after the event and promised to take a picture with her.

Chanting his own dialogues
On popular demand, SRK mouthed the popular dialogue from his film Raees which is yet to be released. He also said some lines from DDLJ, Kuch Kuch Hota Hai, Om Shanti Om and of course Fan.

What is SRK’s fan moment
He said, “When I was a kid, I thought I looked like Kumar Gaurav. I remembered when Love Story had released in Bengaluru, everyone would call me Kumar Gaurav and I would like that a lot. When I came to Mumbai, the first star I wanted to meet was Kumar Gaurav. Then when I grew older I thought I looked like Al Pacino. And now at the age of 50, I think I look like my father. There will come a time in my life when I will be very proud to look like myself. 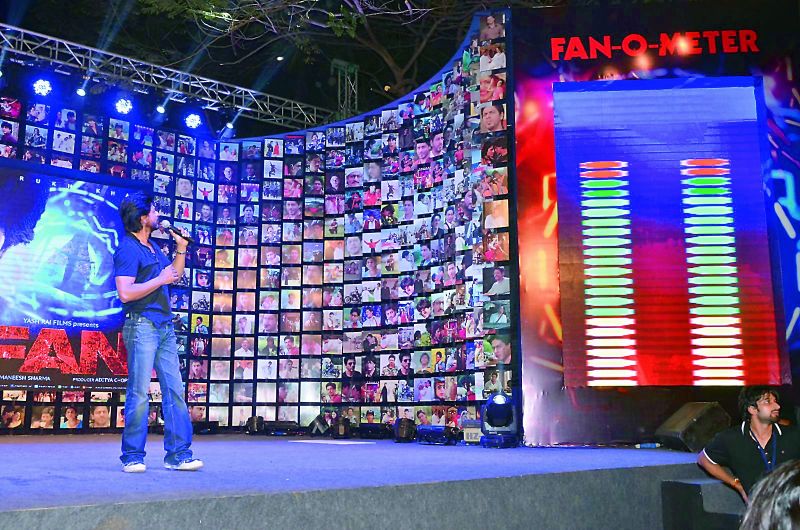 Shahrukh Khan at YRF studios during trailer launch of fan

Slapped by a woman
When a fan wanted to know if SRK had taken the train or the flight during his first visit to Mumbai, the actor had an interesting anecdote to share. He said, “I came by train. The train would turn into a local after entering Mumbai, something I was not aware of".

"So I did not let a few people sit on my berth saying that it is mine and that ‘I had paid for it’. I did offer it to a lady though, saying, ‘you can sit but I won’t let the men with you sit on my berth’. And that lady slapped me real hard saying that ‘it isn’t yours, it is everybody’s.”