Varun Dhawan and Arjun Kapoor at an event, Arjun, Priyanka Chopra and Ranveer Singh in a still from 'Gunday'.

Mumbai: Varun Dhawan and Arjun Kapoor shared the same acting class. The two are friends ever since, and they have only gotten close with time (especially thanks to the Katrina Kaif hate club).

Now it appears that they are rehearsing for another dialogue, where Arjun is seen reciting, “Aisa koi saga nahi jise tune thaga nai Varun.”

Varun himself shared this video, where a man with huge arms can be seen in shorts. Here’s the video:

Priyanka Chopra found the video funny and ended up commenting, ‘LOL’. Here’s a snapshot of it: 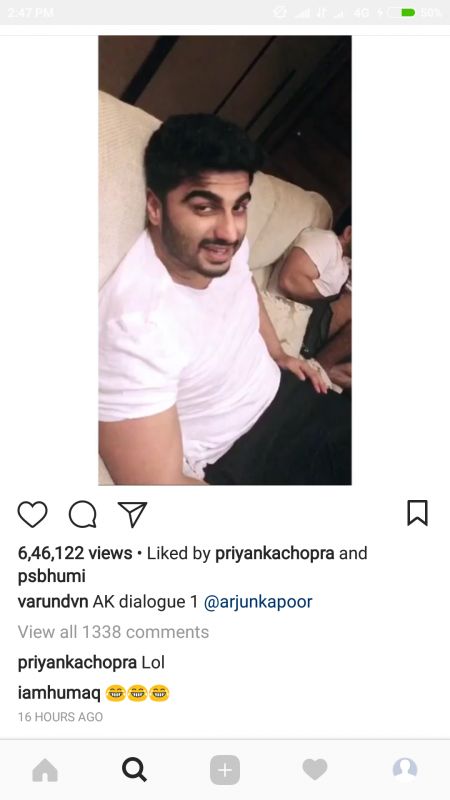 Interestingly, Varun hasn’t ever played a thug in his life, but Arjun’s baba Ranveer Singh did so in the beginning of his career with ‘Ladies Vs Ricky Bahl’. So wouldn’t this dialogue have suited Ranveer rather than Varun?

In fact, Ranveer and Arjun’s movie ‘Gunday’ also saw them as ‘Thugs’. This is being taken forward by superstars Amitabh Bachchan and Aamir Khan, who also play thugs in their next, ‘Thugs Of Hindostan’.

Arjun Kapoor will next be seen in ‘Sandeep Aur Pinky Faraar’ with Parineeti Chopra, post which he will again shoot with the actress for ‘Namastey Canada’. Varun, on the other hand, has Shoojit Sircar’s ‘October’ and YRF movie ‘Sui Dhaaga’ in the pipeline.