'Aamir is the new Raj Kapoor': Rishi Kapoor applauds the actor for Dangal

Rishi Kapoor praised Aamir by calling him “the new Raj Kapoor – showman of our times.”

Mumbai: Directed by Nitesh Tiwari, ‘Dangal’ is receiving all kinds of rave reviews from everywhere ever since its release. The film did not only earn critical acclaim but is also doing a splendid business at the box office.

Aamir Khan’s performance, who plays the lead in the film, was praised by all, and now, the actor has found a fan in Rishi Kapoor. Rishi, who saw the film with his beautiful wife Neetu, absolutely loved Aamir’s performance.

Rishi Kapoor praised Aamir by calling him “the new Raj Kapoor – showman of our times.”

Rishi tweeted, “@aamir_khan, Saw "Dangal"For me you are the new Raj Kapoor-actor,director,producer, showman of our times. Absolutely wonderful.God Bless you!”

Aamir Khan thanked Rishi for the sweet compliment by saying, “Sir, that is the biggest compliment I have received! Thank you sir. I'm so touched. Love. a.” 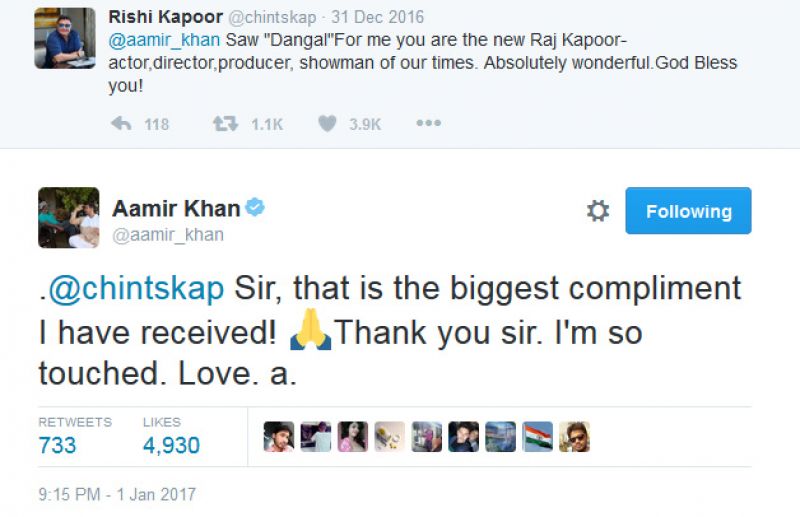 ‘Dangal’ is based on the life of Mahavir Singh Phogatand his wrestler daughters, Geeta and Babita.