Kangana Ranaut’s first look as Rani Laxmibai from Manikarnika: What we love and doubt

The first look of Kangana Ranaut as Manikarnika alias Rani Laxmibai is out and even though it is impressive to a great extent, the look also leaves us in some doubts. 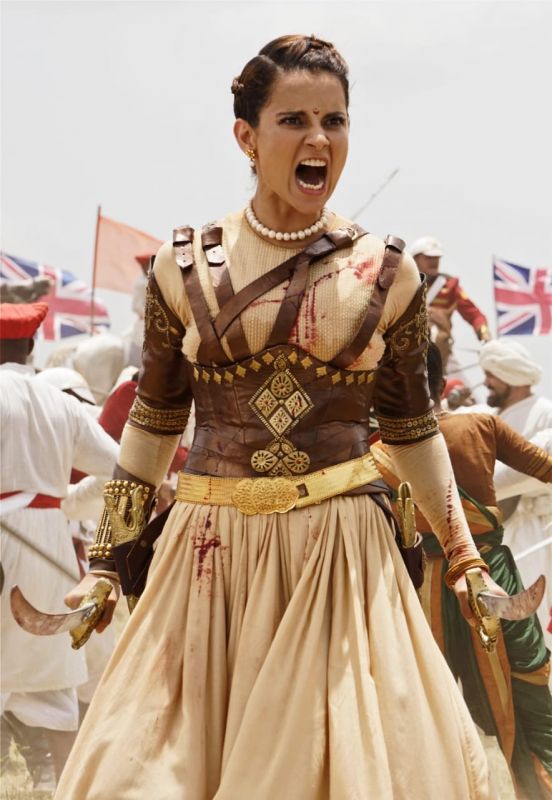 Kangana Ranaut as fierce Manikarnika: The Queen of Jhansi.

Kangana looks like a fierce warrior in this one – she is clearly angry looking at something in the war scenario.

“I feel a sense of immense pride to present the larger-than-life story of Manikarnika, which I’m sure will inspire & entertain cinegoers. A symbol of heroism and humanity, this is our tribute to one of India’s greatest freedom fighters,” she let out in a statement.

On a battlefield her look might appear to be a mismatch but it isn’t really. If one talks about the jewellery, then many illustrations and graphics about Rani Laxmibai have shown that the fighter woman was fond of wearing good jewellery, even when she had a sword in her hand. So Kangana has done a good job in recreating that. Her clothes too, even though appearing tight on her, is again a recreation from that era, which again is good work on her path. But what has left us wondering is the hairstyle. The Queen of Jhansi rarely left her hair open, especially when on the battlefield, and even if she did, they were never tied up. Kangana seems to have added her own element in this aspect by bringing in a modern-time hairstyle for such an intense scene and we don’t know what the reception for that would be.

The mystery could probably be solved as the teaser of this film is finally going to be unveiled tomorrow. It will showcase Kangana Ranaut’s directorial skills for the first time, and thus, excitement around this one remains intact!