This is the ultimate limit of excess, Big B tells Ranveer, Padmaavat actor reacts

Amitabh Bachchan and Ranveer Singh are yet to work together in a film.

Mumbai: Even at the age of 75, Amitabh Bachchan is considered among the most stylist personalities in the film industry.

Be it in suits or traditional wear, the megastar is still known for his sense of style, though conventional yet classy.

On the other hand, there is a Ranveer Singh, who is known for his funky style of dressing and ‘loud’ choice of colours, which gets mixed reviews from the fashion police.

Being a Govinda fan, we don’t blame him and fans love him for the very same reason.

So what happens when the conventional decides to become the unconventional in fashion? The answer is Bachchan’s recent Instagram post.

The veteran posted this picture dressed in a colourful attire, right from his glasses to the shirt, tie and the jacket.

His caption was also colourful, calling his appearance the ‘ultimate limit of excess’ and that he was ready to compete with Ranveer Singh.

This is the ultimate limit of excess .. ready to compete with Ranveer SINGH ..😋😋

The ‘Padmaavat’ actor, who is a self-confessed Big B fan, didn’t want to compete and happily conceded. 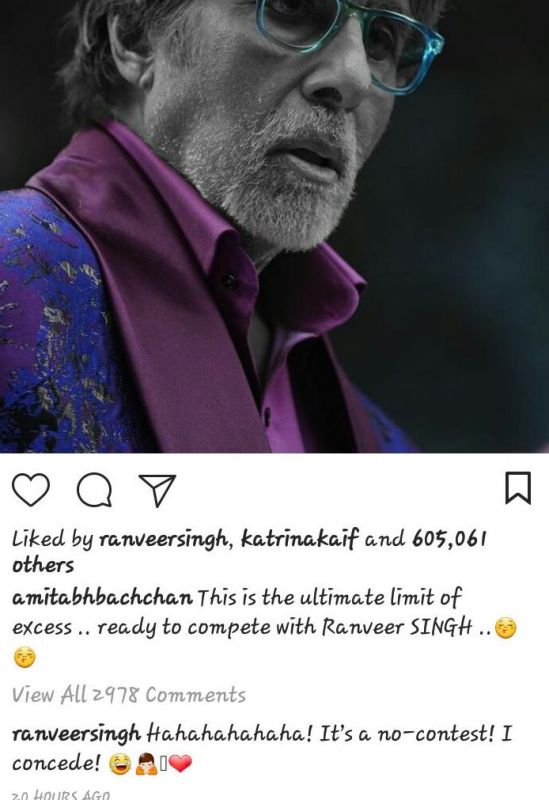 The megastar might not be at Ranveer’s level of quirkiness yet when it comes to fashion, but there is no doubt that even at this age, he is quite close to his energy levels.

Working on multiple films, constant updates on Twitter and regular blogging are just some of the reasons why he continues to inspire even today.