Mumbai: Jagga Jasoos is one film that has been the hub of many controversies, because of its delay and the well-known break-up of the central leads Ranbir Kapoor and Katrina Kaif.

To much delight of their fans, the film will finally see the light of the day without any further delay.

The film’s director Anurag Basu took to Twitter on Monday, to share an adorable picture of Ranbir and Katrina. 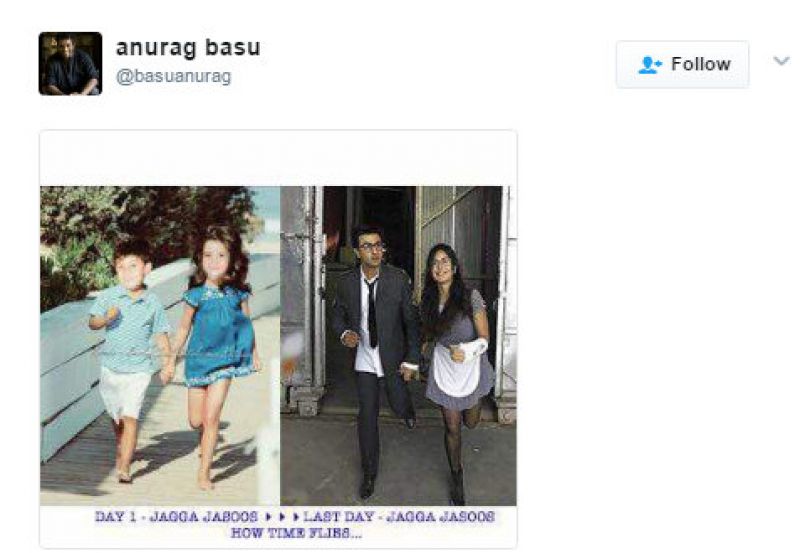 In one picture, the faces are photoshopped with Ranbir and Katrina’s face, while in the other we see the lovely duo walking hand-in-hand.

The second picture is from the last day shoot of  ‘Jagga Jasoos’, wherein both of them are seen sporting nerdy looks.

Well, there were rumours that Katrina might not promote the film with Ranbir, but putting all these rumours to rest, Ranbir said, "Katrina has worked very hard on the film. The film is hers as much as it is mine. We will promote it really well, and release it well too. When we make a film, we make it with lots of love and sincerity. We would like to put it across in the best way possible."

Katrina who is on the same line as Ranbir said, "At least a hundred stories about Jagga Jasoos must have come out, but probably 99% of them aren’t true. As of now, I don’t know the (publicity/marketing) plans of the producers or distributors of the film. Whenever they share that plan with me, and since it’s my own film, I will be happy to do whatever they feel is good for it."

The film is all set to release on July 14.

■Exes Ranbir and Katrina pose for first selfie after breakup on Jagga Jasoos sets
■'Jagga Jasoos is as much Katrina’s film as it's mine, promoting jointly,' says Ranbir
■Ranbir's Jagga Jasoos finds a release date, may clash with Saif's next
■Is Katrina Kaif playing a waitress’ character in Jagga Jasoos?