Are You Suffering from Selfitis?

In May of 2015, Kim Kardashian published a book called Selfish - 448 pages long - comprised entirely of her favourite selfies. Sound absurd? Apparently not. Selfish quickly became a New York Times bestseller. Right from your neighbour to Michelle Obama, to the Pope... everyone is clicking selfies. In 2014, a viral story reported that the American Psychiatric Association (APA) had coined "selfitis" to denote a new mental disorder about people who obsessively shoot and share selfies online. The story turned out to be a hoax, but it sparked new research.  In 2017, researchers from Nottingham Trent University in England and Thiagarajar School of Management in Madurai, India, created a Selfitis Behavior Scale (SBS) to assess the severity of different cases of the supposed disorder, after evaluating a group of 400 people from India. Why India? Because it has the highest number of Facebook users and the highest number of deaths from people trying to take selfies from risky locations.

Is 'selfitis' an alarming mental health condition? Or is all this hoo-ha and debate around selfies one more instance of non-millennials over-pathologising activities that millennials enjoy? “The term 'selfitis' has become fairly commonly used and although I hear the term often enough, I'm yet to meet a patient who comes with this as a primary concern. It's definitely a concern for parents and at times partners, but never for the patients themselves," says Dr Wilona Annunciation, a psychiatrist. What is the impact of taking and posting selfies, on minds of young people?  Research studies in this area have been inconclusive. Dr Annunciation says, "Rationally speaking, I'm not someone who would categorically terriblise the selfie bandwagon because I understand where this generation is coming from. Perspectives have shifted from the generation that thought dressing up was for vain people, to everyone feeling, why can't I look good inside and out? Today's generation has the money to spend and does not mind spending it on looking good and that's not all bad."

For Sushmita Das (26), a working professional, says selfies are fun and entertaining. She loves the validation that her friends give her when they give 'likes', although she adds that she feels low if a picture doesn't gather enough 'likes'.  Putting your best face forward in the digital realm is essential today. Is that necessarily a problem? Dr Annunciation avers, "Today's world is extremely visual and unless you make a strong impact, you are likely to be forgotten. This generation understands this and is working on these lines to build their lives. Does that mean they are wrong? Absolutely not! The problem still remains what it always was - the people who suffer from poor self-esteem or the ones that feel the compulsive need to post selfies. The problems remain, the modes of expression have changed."

But what if my 'best' picture is one that is doctored? It's no secret that some people edit their selfies before posting them. And by 'some people', we mean pretty much every social media-savvy celebrity and a slew of your friends. A plethora of apps allow you to perform digital plastic surgery without much skill.  What's wrong or unethical in presenting one's best face? When a society insists upon a certain kind of a look, it raises the bar for what's considered 'normal'. Or 'acceptable'. It may impose unrealistic standards about looking good upon young, impressionable minds. Another area of considerable risk is when adolescents desperately seek acceptance and validation through 'sexting' - sending sexually explicit or nude selfies. The 'sexualisation of culture' means that many young people feel there's an expectation to look a certain way and be sexually active. This pressure extends to sending sexts. 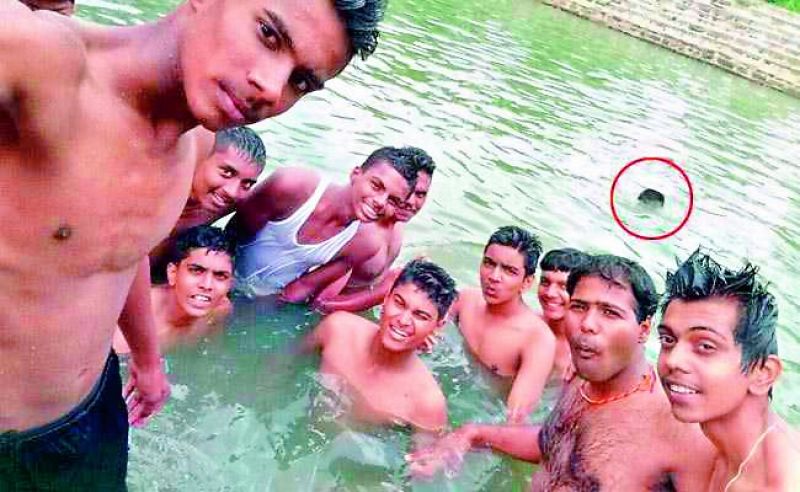 Sept. 26, 2017: A 17-year-old student drowns (circled) in a pond near Karnataka's Kanakapura, while his unmindful friends are busy taking a group selfie.

Take the case of Sonali, 17, who sexted some nude pictures of herself to a boyfriend. "My peers saw me as this boring, one-dimensional person - a 'nerd' who didn't party or mix around with boys. I wanted to make a point that I too could be like one of them," she says. Decision-making skills may be poor during the teen years. And credulous teens like Sonali, with low self-worth, may succumb to pressure and coercion and act impulsively. 'Bed' selfies, 'no make-up' selfies, 'mirror' selfies, 'sick' selfies, 'duckface' selfies… the list is endless. What's the point of all this documentation? What kind of memories are we archiving? According to Sherry Turkle, sociologist at MIT, an addiction to selfies may detract from our being in the 'here and now' and savouring the moment-to-moment experiences. Or pausing long enough to reflect. Documenting the minutiae of our life keeps us from viscerally experiencing life as it unfolds. "It's fun to have a camera and it's fun to take pictures. It's not the fact that we have this new affordance where anything can be a picture. It's our vulnerability to what we make of it - if, for example, we use it so that we don't have to be attentive to each other or to the environment," she says. We are social beings and want to be admired by people around us.

Social media allows 'reputation management' as its users can reveal aspects of themselves in a selective, controlled and socially desirable way. According to American sociologist Charles Horton Cooley, an individual's 'self' is initially created through the ideas and concepts that others have about him; people learn whom they are from others and from their imagination of how they appear to others. Cooley's concept of the 'looking-glass self' says people use the self as a mirror.  If you get just 20 'likes' for your selfies, you may choose to think, "I like my selfies and I'd be great if my peers liked them too and gave me about a 100 'likes' in 24 hours; but they don't absolutely HAVE TO! If my selfies are judged harshly, I can tolerate the backlash; in no way is this a measure of my self-worth." Consequently, I may be extremely disappointed or perhaps even annoyed that my pics aren't gathering enough 'likes', but I can grit my teeth, acknowledge the bitter reality and get on with my life, reasonably happy. But, being human and fallible, you also have the choice of thinking in a disturbed manner. "I like my selfies and hence they MUST be admired by my friends and peers and gather at least a 100 'likes' in 24 hours! I can't stand getting just 20 'likes' and think that's dreadful and awful! Disliking my selfies equates to rejecting ME!"

These extreme modes of thinking may lead to feelings of inferiority, depression and shame. Or anger and aggression towards those who seem to reject us. Dichotomous may foster an unrealistic view of 'self', as either 'approved and liked' or 'disapproved and disliked.' But is social media usage turning some of us into narcissists? Dr Annunciation says, "I don't think this is a more narcissistic generation than the previous ones. I think there is a paradigm shift in the way we look at healthy body image expression and over time we may actually see what today's narcissism is expressed as tomorrow's humility."

(Srilatha Srikant is a practising psychotherapist and REBT practitioner.)