Morals keep changing: ‘As a society, we are more compassionate today’

First, women on average tend to be socialised to focus more on caring for others and valuing close relationships than men, and they tend to score higher on some tests of empathy.

Researchers at the University of Melbourne, who analysed contents of books in English, have discerned distinct shifts in moral sensibility between 1900 and 2017. People are more compassionate than 100 years ago. Care and safety are more important than in 1980. 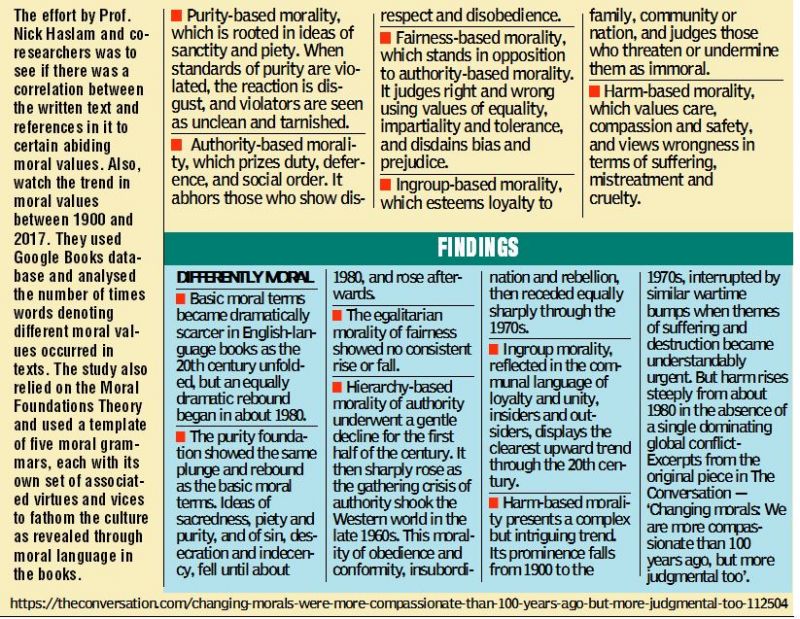 Why do women tend to endorse harm-based morality than men?

I think there are two main reasons. First, women on average tend to be socialised to focus more on caring for others and valuing close relationships than men, and they tend to score higher on some tests of empathy. Harm-based morality is a form of morality that fits these emphases because it is all about judging rightness and wrongness based on protecting others and minimising suffering. Second, but related, women — at least those in societies where this research is most relevant — tend to be somewhat more politically liberal than men, and harm-based morality is associated with liberalism.

Fixing 1980 for a reference point is quite interesting. Would you elucidate that aspect a little more?

We are not really sure why 1980 seemed to be a pivotal year, but we found that most forms of morality became more prominent from about that time. That went both for moralities that are associated with the political left, such as harm and fairness, and also for those associated more with the political right, such as moralities of authority, purity and loyalty to one’s ingroup. Throughout the 1980s and since, the Anglophone world has “remoralised”, in the sense that moral language has become increasingly prevalent in its culture.

The research focuses on language used in English language books, a large proportion of which are published in the USA and the UK, so we might guess that the rise in moral language could be associated with the rise of conservative political figures and movements in those countries from around that time. Reagan and Thatcher came to power and exerted huge influence for many years.

Political polarisation has also risen over these recent decades, with arguments becoming increasingly moralistic and hostile from both left and right. So we are not sure exactly what has driven this rising in moral language, but it is real, it is sure to have consequences, and it did seem to begin its upswing around 1980.

Hasn’t the emphasis on ‘Me’ rather than ‘Us’ been a trait, plausibly a part of human evolution?

Other researchers using similar methods to ours have found a gradual shift towards the use of “me” and “I” and other signs of individualistic values. This has been documented in the USA and also in China. I don’t think I would call this emphasis on “me” a trait, because that would imply it is rather fixed whereas I think it is quite changeable and differs widely across cultures and historical periods. I’m also not sure the shifting emphasis towards the individual is necessarily part of our evolution, if by that you mean biological evolution. It’s certainly a kind of cultural change, but I think it has as many negative aspects as positive ones, so in some respects it’s a devolution.

Do these moral qualities have anything to do with the development of scientific temper?

I think scientific work and the scientific attitude have a very strong moral dimension. If I had to choose one of the moral foundations that is especially important it would be fairness. Part of the scientific temper is surely about being even-handed, evaluating evidence and ideas in a dispassionate and balanced way. It is the opposite of believing something because an authority figure said it was true or out of deference to tradition.

Ultimately, won’t the trend of increasing compassion make the world a better place and there is greater hope for humanity?

Yes, it’s hard to argue against an increase in compassion. However, our finding was not only about compassion but about a broader increase in how much our morality emphasises harm and protection from harm. I would argue that being overly preoccupied with harm can also cause problems: it can make us exaggerate small harms and seek protections from innocuous events. Some writers have suggested that an excessive emphasis on harm and safety can make us fragile rather than resilient, so I think we need to be open to the possibility that a rising morality of harm might have some negative aspects alongside the positive ones.

Man is essentially selfish, but at the same time the human species practises noble virtues. How does one explain this in the context of the research findings?

I don’t think our research addresses the how or the why of human morality, or whether we humans are fundamentally selfish or noble, or both. It is really about how our thinking about moral issues changes over historical time. Regardless of whether we are individually good, bad, selfish or considerate, the way we talk and think about morality undergoes cultural shifts. It was those shifts that we tried to clarify in our paper.

(Nick Haslam is Professor of Psychology at the University of Melbourne)