Countdown to doomsday: Will the nuclear winter be early?

On January 24, the symbolic Doomsday Clock stood at two minutes to midnight, the closest it has got since it was configured by the Bulletin of the Atomic Scientists in 1947.

On January 24, the symbolic Doomsday Clock stood at two minutes to midnight, the closest it has got since it was configured by the Bulletin of the Atomic Scientists in 1947. N-arms, climate change and the increased use of information warfare are key threats.

The Clock and the Giant Mushroom

The enquiry into the ultimate nuclear winter has to lead from two countries: the United States and the United Kingdom. They are responsible; they are the architects of the Quebec Agreement that started it all. Therefore, they have to take advantage of the acquired headway and lead. Under the law of invariance, a term one uses to express existential mass and inertia in national security studies, the Japanese bombings were nothing new except a staging of what was going on in the art of annihilation since the beginning of the human system. It was a giant leap with a small step “for mankind” towards destruction by invention. Did the “little boy” Truman say so? Whatever, one cannot discount the facts so far while counting steps to Armageddon.

The answer to the question, “Are we close to nuclear winter?” traps these traces. A close observer can smell them out. This article is not descriptive about them.
The doomsday clock is at two minutes to strike, as of now. But, unlike on New Year’s Eve, the people are not waiting to say “Happy nuclear winter” to each other at the strike of the dong after two minutes. Will it strike? I don’t think so.  At least not to usher in the next big war. People are rational today.

The doomsday clock was the creation of the doomsayers (read the last of the nuclear Mohicans) of yesteryears. They were involved people; they knew the things behind the Manhattan Project in the “land of giant mushrooms” and subsequent developments. For the uninitiated, it is maintained by the Bulletin of the Atomic Scientists since 1947, two years after Hiroshima. The clock was at seven minutes to midnight to start with. It kept rolling as the world order shifted. Since 24 this month the clock is at two minutes to “midnight”. One can almost see the end of humanity from there.

What is Doomsday Clock?
Founded in 1945 by University of Chicago scientists who had helped develop the first atomic weapons in the Manhattan Project, the Bulletin of the Atomic Scientists created the Doomsday Clock two years later, using the imagery of apocalypse (midnight) and the contemporary idiom of nuclear explosion (countdown to zero) to convey threats to humanity and the planet. The decision to move (or to leave in place) the minute hand of the Doomsday Clock is made every year by the Bulletin’s Science and Security Board in consultation with its Board of Sponsors, which includes 15 Nobel laureates. The Clock has become a universally recognized indicator of the world’s vulnerability to catastrophe from nuclear weapons, climate change, and new technologies emerging in other domains.
— John Mecklin, editor, Current Time, Science and Security Board Bulletin of the Atomic Scientists

Previously, the clock was at it twice — in 1953 and 2018. Nothing serious happened, though. Will it close further? We do not know. But, then, it is not the clock that matters, but the metaphor for the intensity of threat attraction. The wise people of the Bulletin certainly feel the heat better than the ordinary and casual.

The two minutes setting must be bad. It was 17 minutes to midnight in 1991. The clock predicts the likelihood of a human-induced catastrophe that can wipe out major human systems. The cause is widened today. It is not just nuclear risk alone in the present context. It includes everything that can wind the clock — climate change and all that modern technology under skewed governance can offer to undermine classical wisdom in governance and drain away compassion from humanity.

The Book of Revelation refers to the four horsemen of Apocalypse. The scientists predict worse. The number of horsemen in the doomsday clock is already beyond that number. More will join.

The Setting
The present setting is due to escalating threats to human system in the absence of prudent governance. The US government has pulled down shutters since December 22, 2018. The Congress refuses to heed the President in passing the key bills to fund government projects, especially the Great Wall of Mexico. Instead of holding breath a la Obelix, POTUS should know Emperor Chin could not keep the Huns at bay in spite of the Great Wall built for the purpose.

From this point of view and the cost, it looks the Congress is wiser. Absence of funds will hold back US government from entering into new contracts under the Anti-deficiency Act, 1884, as amended. Absence of government makes decisions lag behind in any country. This allows conflicts and negative interests thrive in the leeway.

The absence of government or shutdown of a running government even for a day is a dangerous situation. That could occur in many countries. The ante force in the system rises up. It is ominous. The clock moves closer. The state of the world is not healthy with various ongoing conflicts. The crisis all around is only deepening.

According to a study, there are 35 live conflicts in the world today. Millions of people have been killed and many more made homeless and socially maimed. It is interesting to see that subjugating humans have more or less become a pastime for the modern sapiens on rampage.  Women and children suffer maximum. The statistics are shocking. 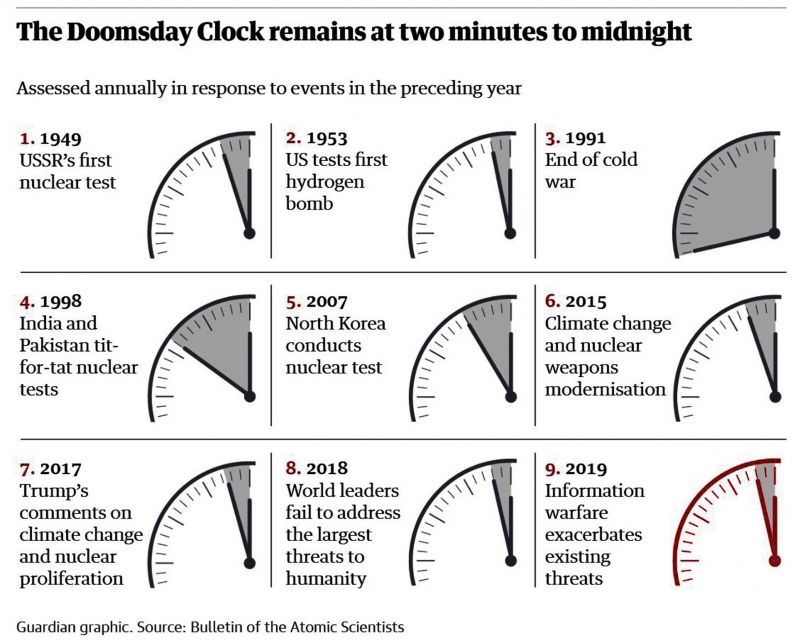 Wars are fought all around the world with active soldiers and hired mercenaries. There are around 300,000 child soldiers fighting wars in different fronts. Nearly 40 per cent of the land on the planet is mined. The situation sets the trend rolling for three of the most lucrative transnational criminal business ventures — arms trafficking, drug trafficking, and human smuggling and trafficking — all linked. Insurgencies, terrorism, and lawless wars seemingly act as fronts for the lucrative three.

And if all the horses converge, like the sunlight through a kids magnifying glass, the existing nuclear arsenal can evaporate the planet in less than a day and cause serious gravitational jams confusing nearby planets in their orbits. Some of the nuclear inventories are on trigger alert — ready to launch at moment’s notice.
Human rights and social justice are still a far cry for majority of the people of the world including those in democracies. Climate change can play truant with natural capital accelerating the onset of doom.

Hope
There is also hope. Despite the projected state of doom, including moving the clock closer, there is good news about the world. There is public opinion that the millennial generation of 18-35 age group seriously and genuinely cares about the world. This is evident world over even in conflict ridden political arenas. Ethnic diversities of all kinds are being broken today and in every country the young are showing that they can make decisions far different from the self deprecating and parochial appellations that prevail in their home countries. They are confident that they can make a difference and lead the system towards favoured conditions. But there are issues such as economic imbalance, unemployment, resource depletion, political instability, limitations to freedom, fears of physical safety and security, lack of education, government apathy, corruption and sleaze, poverty, ethnic insecurity, abuse of women and children, transnational crimes and so on. The solution is governance, both national and global.

The antidote for doomsday syndrome is governance; humans need someone to control them. Even a dead leader on the pedestal will do.

Hiroshima: when God lost faith in himself
When silen-ce beco-mes deafeningly loud, it’s time for the rulers and their satraps to stop bickering and mocking at the people. How does one measure decibels of human silence or, to that extent, human endurance in a governance scene? Walk into Hiroshima.

Silence is still audible in the beautiful city of Hiroshima, where the most heinous savagery in human history happened at 8:15 am on August 6, 1945. Many people died. The toll continues today through genetic mutation. Living is dying.
There is a small bend in the Peace Memorial Museum in Hiroshima where chattering voices of visitors cross the event horizon and fall into the black hole of silence.  You, the temporarily disoriented visitor to the museum, can actually hear this silence. 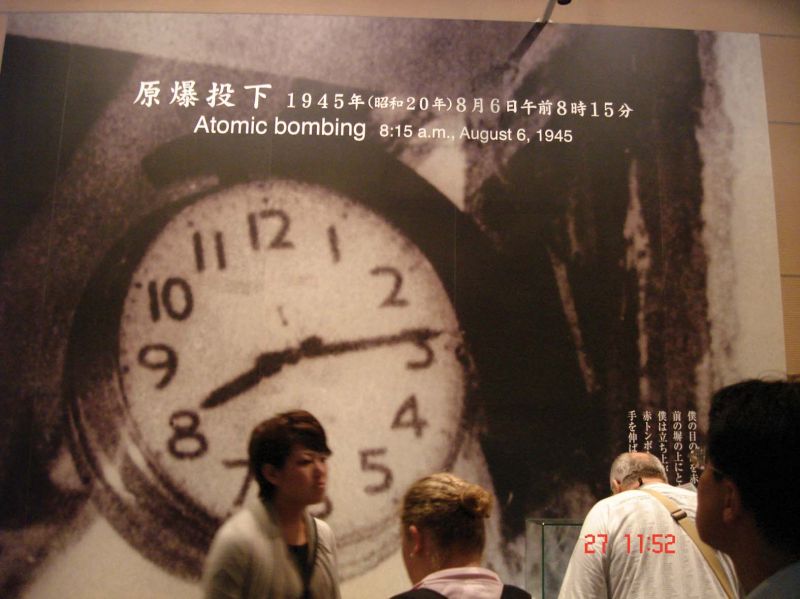 Hiroshima: when God lost faith in himself

It is where the oafish nuclear slaughter of the humans, the way it happened on that fateful day, is exhibited. That will make you ashamed of being a sapien. That was the day God lost faith in himself.

Within days, the Americans dropped another bomb, more casually than the first. When the B29 reached over Kokura, the original destination, the crew could not see the town because of low-lying clouds. The plane moved ahead and lobbed the ‘Fat Man’ wantonly into Nagasaki at the ease of throwing hotel waste on roads in most of our towns.

Arguments that the War was already over when the bombs were dropped still continue. A similar savage act in the future is what the world is petrified about.
Whatever, the Americans could live-test a uranium 235 and a plutonium 239 bomb. The numbers stand for the atomic mass of the element (mass number).

The Americans moved ahead in nuclear race. Stalin followed grudgingly in utmost secrecy initiating the Cold War. The line of nuclear nuggets is a bit long today, enough to garrote the world, not just one country. The issue will never be over as nuclear weapon is a doable for any geopolitical entity, including rogues (relatively), and the mole people in the dark alleys of every country.  Anybody can bake a dirty device in the melee.  Getting support to make a nuclear device is not difficult.  Isn’t that chilling?

Excerpts: Bulletin of the Atomic Scientists