The Net is dominated by a handful of gargantuan enterprises: Google which controls 80 per cent of global search; Amazon, which lands 50 per cent of all product buys; aspirants such as Facebook and Microsoft and Apple, who are just getting their own act together.

Print is dead!” they said. “TV will soon say its last hurrah!” they predicted. Inter-net is the medium of the future, tech pundits told us. There are just 7.5 billion people on earth, a third of them with access to the Internet, but 50 billion visit Google every month, which  must mean that every human with an Internet connection clicks on Google at least once a day. So if you are a big (or small) business, you buy a domain name, create a website, pay someone a monthly fee to host it, and display your wares — a virtual mandi. But you sell nothing, because nobody knows you are out there.

So you advertise, enticed by the high-pitched marketing of services like Google ad words which promise that they know exactly where your potential customers are, what they buy, how much they spend, when they eat, play or sleep. All you need is to set aside a monthly kitty and they will use it to have your advertisement pop up on a million users’ pages. Only hitch: Every time they click on your ad, you pay.

Digital marketing trainers will tell you: be prepared to pay for many months before you get any business. Meanwhile, your little budget of  Rs 1 lakh seems to vanish within weeks. Angry? Deal with it. There is seemingly no other way.

Google dominates web search like a colossus. But when you search with a key word, chances are, almost half or more of the first page is filled by people who have paid Google to appear there — only then will the non-commercial info appear. And all those advertisers are paying — even if you click by accident.
Last week, a major scandal erupted in the ad world. Correction: It was a long suspected scandal, only now acknowledged, by a biggie like Google. It seems that all those clicks that you, as advertiser, paid for, well, many of them were not clicked by humans but by clever robotic programmes or bots, which went about “clicking” millions of ads every day. Why do they do it? It’s the money, honey! 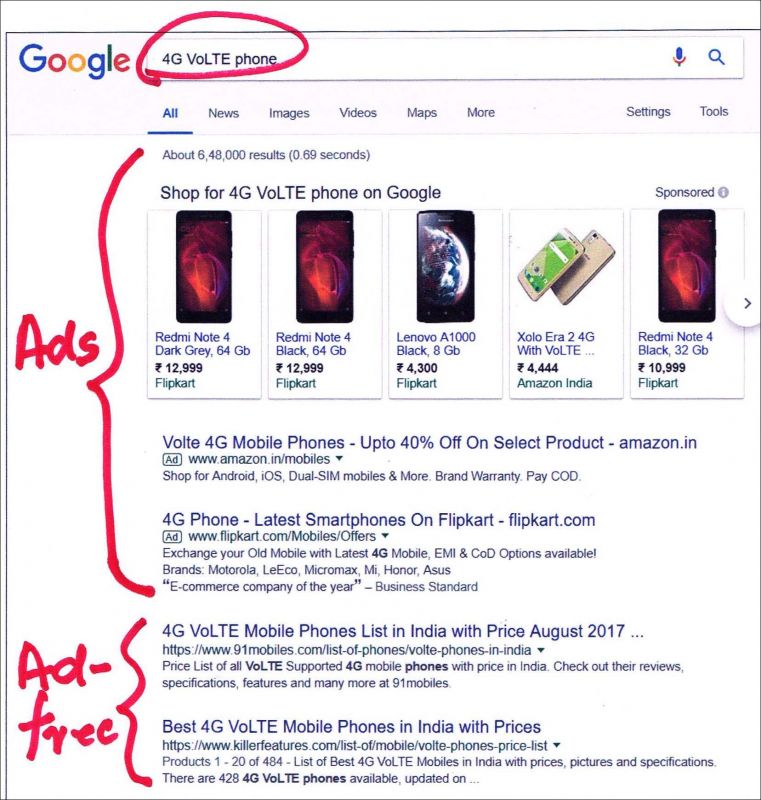 The middle men who consolidate advertisements from thousands of clients and feed them to Google and other web pages (the technical jargon for them is Demand Side Platform or DSP) are a complex chain of agents and everyone gets a cut of the price of every click... if false clicks can be triggered, there’s a lot of money to be made. Independent  agencies like the Association of National Advertisers and WhiteOps estimate that fraudulent ad payouts  by advertisers  could be as much as $ 6.5 billion in 2017 alone... a nice chunk of change if you can have it.

Having discovered these goings-on, Google last week admitted that some ads placed through the tool known as Double Click Manager, were fraudulent. It has offered a refund. But here’s the catch: the refund is only with respect to its own commission, which is typically seven to 10 per cent of the total cost of an ad click. The rest is divided up by others in the chain and no one can trace them. No wonder disgruntled advertisers, when offered a refund by Google, said it was like offering the price of a sandwich. Google is not as yet being open about what it has discovered about those who scooped up the remaining 90 per cent. We have to trust Google and take what little is offered. The problem is more serious because it is not immediately solvable.

Remember those little numbers and letters printed in a wonky way that you have to decipher to enter some bank and other money sites?  It’s called captcha and it is supposed to ensure that you are a human and not a bot. But will they put such a filter before every banner ad? Never, because it will drive away visitors. So in the short term, there is no solution to ad fraud, and advertisers are reconciling themselves to paying a percentage of their billings for wasted clicks.

The situation is much worse with mobile phone ads. Some phone owners install ad blockers so, according to Marketing Science Data, about 43 per cent of mobile display ad clicks are fraudulent.

Who loses? Not the Googles and the Yahoos and the Amazons. Not the DSPs, not the middle men. Only the advertisers — be they behemoths or micro enterprises. The Net is dominated by a handful of gargantuan enterprises: Google which controls 80 per cent of  global search; Amazon, which lands 50 per cent of all product  buys; aspirants such as Facebook and Microsoft and Apple, who are just getting their own act together.

Will any of them put money into technology that neutralises such  Internet frauds which don’t affect their bottom lines, only their reputations? We are probably right in being sceptical — till they actually do it.