Policemen investigate after an unidentified balloon-shaped object picked up by the Indian Air Force’s radar was intercepted and shot down over Barmer. (Photo: PTI)

New Delhi/Visakhapatham/Hyderabad: Five foreign nationals with Iranian passports, suspected to be terrorists on the prowl who gave the slip to Bhubaneswar police on Monday were caught at Nakkapalli in Vishakapatnam of Andhra Pradesh on Wednesday night.

Out of the five, two are aged around 50 years. The group had a man and woman and three youths aged around 23 years. They initially told the police they are all of the same family, but the passports of Iran found with them showed that they are not.

Terror suspects sneak into Vizag from Odisha
Andhra Pradesh additional director general of police Law and Order R.P. Thakur said, “Based on inputs from Odisha police we caught them at Nakkapalli gate and shifted them to Vishakapatnam. We are verifying the terror links if any. We haven’t found any explosives with them so far.”

Police verified the car number and it was found to be a car rented from a travel agency in Delhi. They told the travel agent  they were using it for local touring but they drove to Bhubaneswar.

A senior police official said, “All of them arrived at Delhi from other countries on different dates. Some of them have come from Bangladesh. We are now talking to Iran Embassy to verify the passports authenticity.”

Odisha Inspector General (Crime Branch) Arun Bothra  said, “Concrete inputs have been obtained about the entry of four terrorists who came to book two rooms in a hotel near Master Canteen Square on Monday evening and fled the place when the hotel authorities and a sub-inspector present at the reception suspected their movement. The Ford Icon car in which they had come has been located in Visakhapatnam.”

At around 9 pm on Wednesday, four persons who introduced themselves as citizens of Iraq came in a Ford Icon car bearing a Delhi registration number —  DL4C 9645 and wanted to check into Hotel Arya Mahal.

The rent for two rooms was finalised at Rs 5,000. When the hotel authorities asked for their identity cards, they could not produce any and said they had their passports in the vehicle. They went to their car parked at a distance and sped away.

However, instead of returning to the reception with the passports they sped away. On another front, the helium-filled balloon that was shot down by an IAF Sukhoi-30 MKI fighter over Rajasthan’s Jaisalmer district on Tuesday had flown in from Pakistan and was apparently an advertising balloon with “no payload”, though it may have been a ploy to test India’s operational preparedness, top government sources said Wednesday.

In other terror related incidents across the country, a “big balloon” hovering over the IGI airport, New Delhi, four bomb threat calls to the officials had the police and the armed forces on their toes on Wednesday. 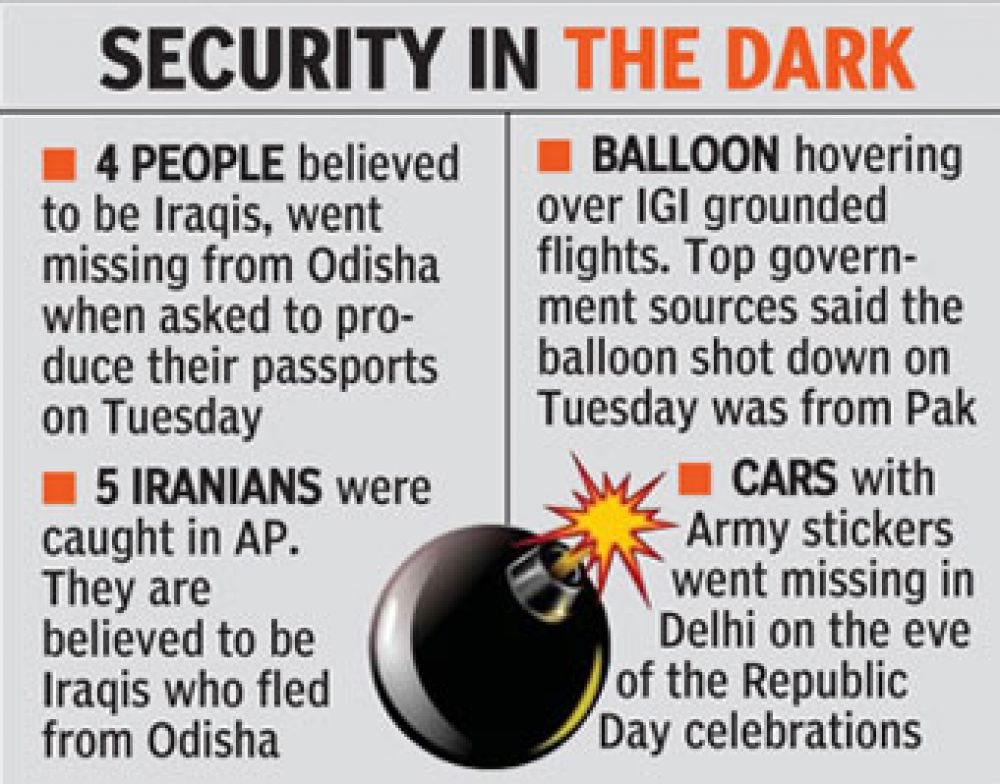 The police said the call centre of Delhi International Airport Ltd. got a call that a big balloon had been spotted, after which the airport was put on alert. The police, however, said later that no such object was spotted by the authorities.

The Delhi police DCP in-charge of IGI Airport, D.K. Gupta, said all the security agencies were informed, though the police had not spotted the object.

The Kathmandu-bound flights of Air India and Jet Airways, which were scheduled to take off at 1.15 pm and 1.25 pm, were halted and sent to the isolation bay just before they were readying for departure after the airport police received a bomb threat call. At the same time, budget carrier AirAsia India’s flight to Goa from Bengaluru, which was to fly 141 passengers and four infants, was also delayed following a similar bomb scare on its flight from Jaipur.

Rajasthan: Congress rings in truce, 15 ministers sworn in with eye on polls