New Delhi: Urban Development Minister M Venkaiah Naidu announced the first list of 20 cities on Thursday that will be developed to have basic infrastructure.

Bhubaneswar emerged on top among 20 cities, including Pune, Ahmedabad, Chennai and Bhopal that have been selected as part of the first batch of the Smart City initiative for which the NDMC area of Delhi has also made the grade.

Assured water and power supply, sanitation and solid waste management systems, efficient urban mobility and public transportation, IT connectivity, e-governance and citizen participation are some of the highlights of the initiative.

Read: What are 'Smart Cities'?

"Nobody can stop an idea whose time has come and this applies to the Smart City (initiative as well)," Naidu said while announcing the list of cities that were selected through the 'Smart City Challenge Competition'.

Congratulating the winners of the competition, Prime Minister Narendra Modi said, "I wish the cities the very best as they move forward with implementation and transform urban India."

The contest was as rigorous and demanding as the civil services competition, Naidu quipped.

"For the first time in the country and perhaps in the world, investments in urban development are being made based on a competition among cities. The results of the competition revealed the unrecognised strength of our federal structure," he said. 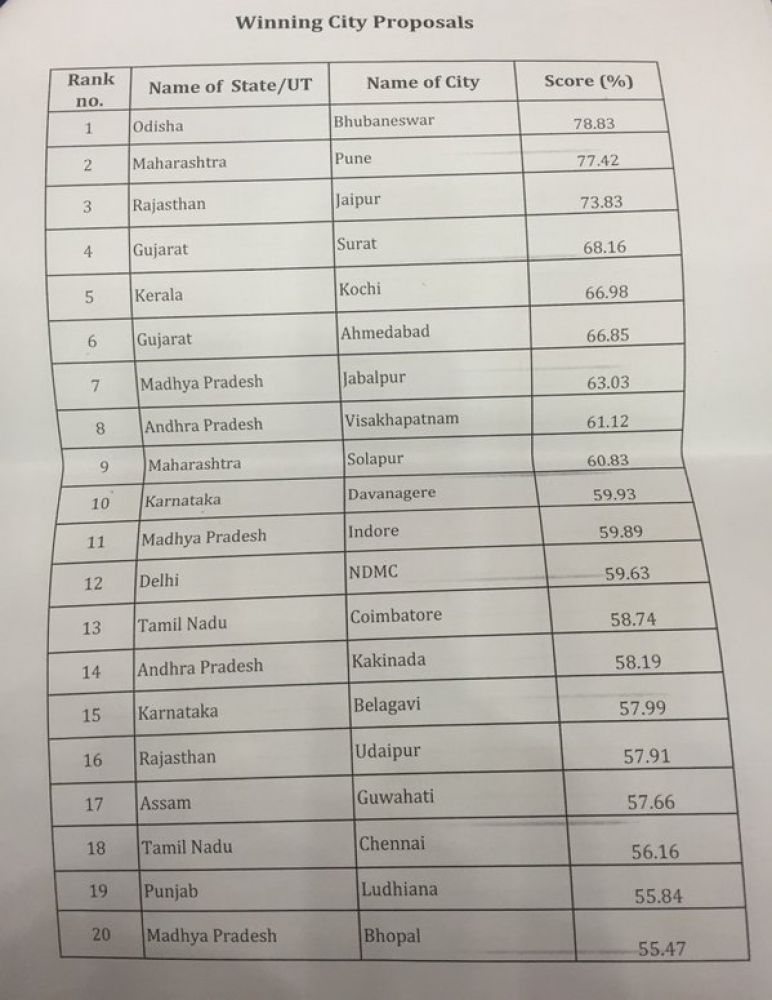 The cities in the first list have made it to the top of the competition based on implementation framework, including feasibility and cost-effectiveness, which had a weightage of 30 per cent, followed by result orientation (20 pc), citizen participation (16 pc), smartness of proposal (10 pc), strategic plan (10 pc), vision and goals (5 pc), evidence-based city profiling and key performance indicators (5 pc) and processes followed (4 pc).

Naidu said that the various states selected the cities and sent a list of 97 names, out of which 20 have been selected.

A bottom-up rather than top-down approach has been the key planning principle under Smart City Mission, he said.

Urban Development ministry had in June last year released the guidelines and mission statement for the project to develop 100 Smart Cities. The mission is a flagship programme of the Modi government.

The focus of the mission includes the provision of clean water, setting up of sanitation and solid waste management systems, efficient mobility and public transportation, affordable housing and governance.

The cities have come up with clear strategies for implementation and have identified partnerships and collaborations for producing the desired results.

Naidu said a total investment of Rs 50,802 crore has been proposed in the selected cities over the five-year period. Of this, Rs 38,693 crore will be spent on area development.

The proposals are based on detailed assessment of strengths, weaknesses, opportunities and threats specific to the city and the area chosen for development.

In all, a total area of 26,735 acres will be taken up for improvement across these 20 cities, including redevelopment of 425 acres (Bhopal-350 acres and Ahmedabad-75 acres).

Under retrofitting, deficiencies in infrastructure and other areas will be holistically addressed. Redevelopment means demolishing built-up areas which are not amenable to any intervention.

The 20 cities account for a total population of 3.54 crore with city-wise population ranging from 2.58 lakh (New Delhi Municipal Council area) to 55.78 lakh (Ahmedabad).

In view of new Covid variant, govt lists measures to be followed by states/UTs