Hyderabad: Protests intensified at the Hyderabad Central University on Wednesday over the alleged suicide of Dalit researcher Rohith Vemula even as more politicians headed to the campus, demanding the resignation of Union Minister Smriti Irani.

Smriti Irani on Tuesday asserted that Rohith's suicide was not a Dalit versus a non-Dalit confrontation and attempts were being made to 'ignite passion' in the case of the Dalit scholar's death across communities.

"This is not a Dalit versus non-Dalit issue as some people are trying to portray. There has been a malice attempt to ignite passions and present this as a caste battle it is not. This is an issue which is being investigated by local police and sub judice in the High Court," she told the media here.

She alleged that the suicide note of Rohith, which was being circulated across the media, was not the authorized copy and read out a quote from the original letter in which no political organisation or politician was being held responsible for his fate.

"We requested the police to give us the copy of the suicide note so that rumors can be laid to rest. I hold that note in my hand and it does not mention any university official, any national political organization or any MP. I quote him, 'to the ASA (Ambedkar Students Association) family, I am sorry for disappointing you, you loved me very much but there is some bad water in us. I wish all the very best for the future', this is the only reference to any organization in the suicide note that we have procured from the local police," Irani said.

Read: I have nothing to do with Dalit student's suicide: Bandaru Dattatreya

Stressing that attempts were being made to misrepresent the facts in the case, she requests to not encourage any 'rumor mongering' in the case and she called on the people to be extremely responsible since it was easy to ignite passions and then regret at leisure.

"We are seated before you with facts and not conjecture and I again say it that it's not a Dalit versus a non-Dalit issue. We have sent a fact-finding team recognizing it is the jurisdiction of the state government," Irani said.

She hit out at the Congress for trying to politicise the issue and said that they did not know the concept of 'following' procedure in a case. "When an MP communicates to us, we have to seek facts from the University. Congress wants to shoot politically on this issue and that is expected from them but unfortunate. This problem persisted during the Congress rule also, if they had fixed this four years ago, possibly Rohith would have been alive today," she said.

The Congress has been demanding the resignations of the HRD Minister, Minister of State for Bandaru Dattatreya and Hyderabad University Vice Chancellor Appa Rao over the Dalit scholar's suicide.

Under attack, the university Vice Chancellor claimed there had been "no pressure" from Union Ministers or the HRD Ministry to act against the youth but offered to facilitate talks to restore peace on the campus.

Read: No pressure from ministers to act against Rohith: HCU Vice Chancellor

The body of Vemula was found hanging in the varsity's hostel room on Sunday, which sparked massive protests. Minister of State for Labour and Employment Bandaru Dattatreya has been accused of being responsible for the death.

CPI(M) general secretary Sitaram Yechury, spokesperson of TMC Derek O'Brien and YSR Congress president Y S Jaganmohan Reddy interacted with the students, who have been on warpath demanding justice for 26-year-old Vemula Rohith Chakravarthi who was found hanging in his hostel room on Sunday.

Yechury said the incidents in the HCU are part of a larger issue of BJP's alleged "game" of turning the country into a 'Hindu Rashtra' and demanded resignation of HRD Minister Smriti Irani and an "independent inquiry" into the incident.

"We are saying let there be an independent inquiry. It could be judicial, non-judicial, but something which is not foisted by the same minister who has through her pressure created this situation and the unfortunate suicide. So let that be there and all those who are part of this conspiracy, I would call, it's a criminal conspiracy, according to the new law we passed in Parliament, they must be tried according to the criminal offence," he said.

"The HRD Minister has to go," Yechury said. He also said that his party would represent to the President, who is the visitor of the university, and ask him on what basis the HCU was conferred the best university award by him last year.

He said his party MP from Kerala, T N Seema, has written to the President saying that it is not morally tenable for her to continue as a member of the court of the university in the prevailing situation unless the vice chancellor is dismissed by the court.

O'Brien said TMC would coordinate with other parties in supporting the agitating students. "This is the fight for justice versus injustice. This is intolerance. There is a documentary evidence from whatever we have seen that clearly points to pressure, ruthless kind of pressure. Parliament is closed now but we will bring Parliament here," he said.

"Chief Minister of Delhi is coming, we are coordinating with all the politial parties. The boys want the support. We said we will help them to coordinate with all the parties who want to come here. More will come", O'Brien said.

RPI leader Ramdas Athawale, whose party is an ally of the BJP, also visited the campus but was "asked to leave" by a section of students.

Vice Chancellor Appa Rao asserted that there had been "no pressure" from Union Ministers or the HRD Ministry to act against the youth.

He also claimed that the youth did not mention his suspension as the reason for the extreme step in the suicide note and that he had favoured leniency for the students allegedly involved in the ABVP leader attack in view of their background so that they could continue to get their scholarship to pursue their studies.

"I am not sure whether suspension has really been the cause for suicide. At least not from the face of the suicide note as left by the student," he said.

Rao said he was deeply disturbed by the loss of a precious life and the disruption of academic activities. He also sought to distance the HRD Ministry and the two ministers Irani and Bandaru Dattatreya from the decisions taken by the University which allegedly forced Rohith Vemula to commit suicide.

"There was no pressure. We took the letters received as routine letters," he said, adding, "there was no phone call from either of the ministers or any ministry official". Rohith was among the five students suspended by the varsity over the alleged assault on a ABVP student leader Sushil Kumar in August last year. Last month, the HCU authorities denied them access to hostel and other buildings on the campus, except classrooms and workshops.

The other four students continued their sit-in at a make-shift tent on the campus, where Rohith was also holding protest from last month terming their suspension as "undemocratic.

The incident has snowballed into a major row with BJP's rivals wading into it and demanding the removal of Irani and Dattatreya, accusing them of being responsible for the death.

The agitating students are demanding resignation of Dattatreya, removal of Vice Chancellor Rao, Rs five crore compensation to Rohit's family and employment to a member of his family, besides revocation of suspension of four students.

Rallying under the banner of Joint Action Committee for Social Justice, the protestors alleged that the five students were suspended following a written communication by Dattatreya to the Union HRD Ministry.

However, dismissing allegations against him, Dattatreya had earlier said, "Anti-social, anti-national activities were going on in the university. ABVP activists were beaten up. At that time, ABVP gave a representation. I forwarded the representation to the Ministry (of HRD). I don’t know what action they did. BJP or I have nothing to do with the incident." 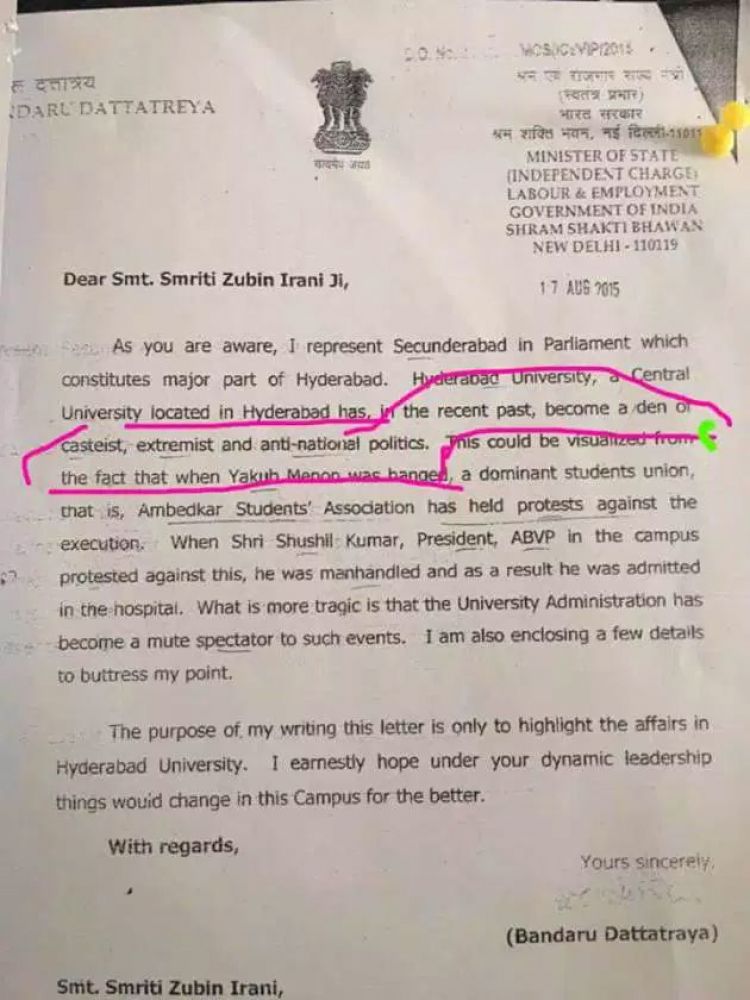 Striking a conciliatory note, the Vice Chancellor offered to facilitate talks with the students to understand their concern and resolve matters in an amicable manner.

In an appeal, he said, "We are all saddened by the tragic incident in which we have lost the life of one bright student Vemula Rohith Chakravarthi. Let us also join together in sharing the grief with his family members."

"We also have to note and learn the ways and means to avoid such incidents on our campus. Let us pledge to give our time and thought process to prevent recurrence of such incidents that disturb the peace on the campus," he said.

"As this semester is a shortened semester and we have a hectic schedule ahead, let us not miss out on class work, research and administrative work from today. It is appealed to all members of the university to put all our heads together and learn to work in this crisis situation," Rao said.

It is further appealed that a group of senior faculty colleagues and dean, students welfare, need to engage in discussions with the students to understand their concerns, resolve matters in an amicable manner and also to pre-empt such issues of the students in future, Rao added.

With land issues put to rest, NIOT to set up seafront facility in Nellore district

High Court pulls up Telangana for being slow on Covid control

TS to put fees in private schools, colleges in check

TD complaint against gambling in Gudiwada