Hyderabad: The suicide of Dalit research scholar Rohith Vemula at University of Hyderabad has triggered a massive political storm in the country, with students across major cities protesting over the incident and demanding the ouster of Union Minister Bandaru Dattatreya and vice-chancellor. In a fresh development, the ABVP leader who was allegedly attacked by ASA members in August 2015, including Rohith, has admitted to seeking Dattatreya’s help after the incident, according to a report in The News Minute.

Susheel Kumar, a HCU student and leader of the Akhil Bharatiya Vidyarthi Parishad (ABVP), alleged Rohith Vemula and four other ASA students had attacked him in August 2015. Rohith and other students allegedly went to his room and threatened him after Susheel called them ‘goons’ for protesting against Yakub Memon’s hanging.

While Susheel claimed that he suffered physical injuries, the ASA students had denied using violence and claimed that he concocted the entire story to get them into trouble.

The University administration constituted an inquiry into the alleged incident, and the first report found the ASA students innocent as it could not be proved that Susheel was physically harmed. However, a second report found them guilty and they were suspended.

After learning about Rohith’s suicide, Susheel recalled his rivalry with the deceased scholar and indicated that it was only student politics and he had nothing personal against him.

“I have known him for almost five years. We were ideologically different, but he was brave.  He would rip apart posters we placed in campus, he was at the forefront of their agitations. I never imagined this would happen. Never. This was just student politics. I have engaged in many conversations with Rohith, though we always disagreed. I stopped speaking to them after August 2015,” he was quoted as saying in the report.

On being probed further, on why did an instance of student politics need the intervention of an Union Minister; Susheel admitted that he had approached Bandaru Dattatreya for help ‘in the heat of the moment’. He revealed that it was ABVP leaders who had asked Dattatreya to write a letter to HRD ministry to look into the matter.

“The issue is not that simple. When the protests against Yakub Memon’s hanging were on, they shouted slogans like ‘If you hang a Yakub, thousands of Yakub’s will emerge.’ The university has a history of students turning radical and as a sitting MP of that constituency, he wrote a letter. We asked him to,” he explained. 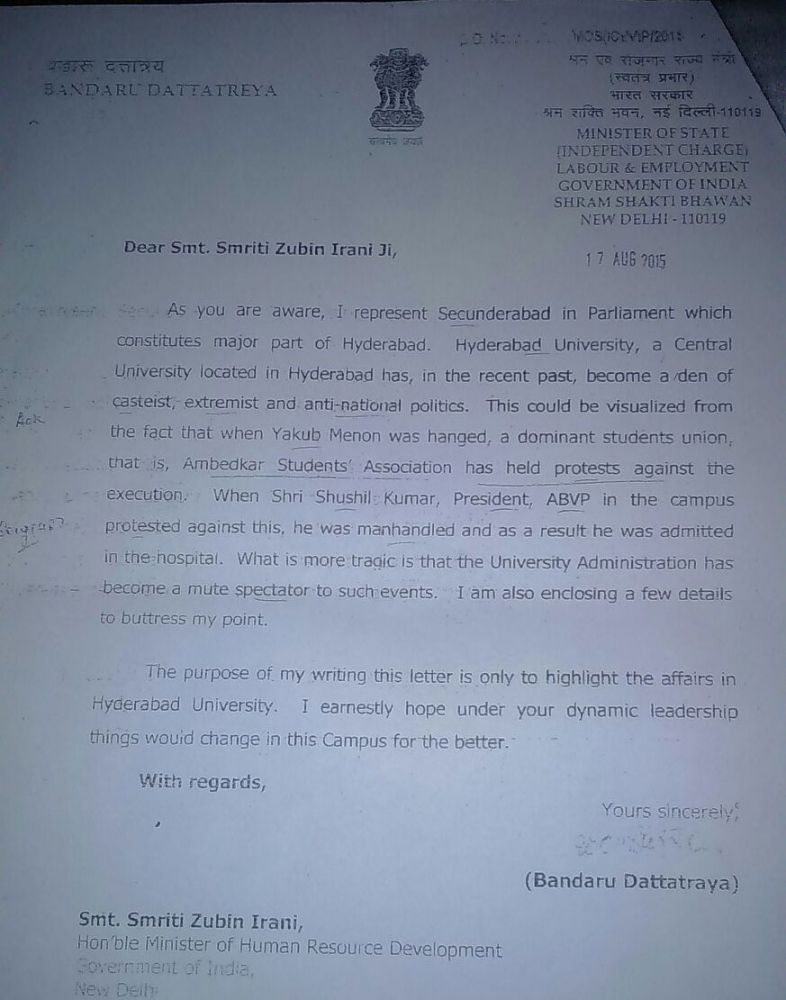 Dattatreya in 2015 had urged Smriti Irani to look into the affairs of the university.

Dattatreya is now facing political heat for writing the letter to Smriti Irani, where he specifically mentions the protests organised by the ASA students against Yakub's hanging. Rohith and his fellow students were suspended after Dattatreya intervened.

Protesting students and opposition parties are now holding the Union Minister responsible for Rohith's suicide and are demanding that he resign from his post. A case has already been registered against him for abetment of suicide.

On being asked whether he regrets his actions, Susheel said 'I don’t know what to say. It was all done in the heat of the moment.'