Broad is the first England bowler since Steve Harmison to top the ICC Player Rankings for Test Bowlers. (Photo: AP/AFP)

Stuart Broad knows what ranking he's got to on the ICC Test Match Rankings for BowlersThat's right - Number 1!

Ashwin, however, continued to top the all-rounders' list, followed by Bangladesh's Shakib Al Hasan. Broad unseated Ashwin after producing a Man of the Match performance in the Johannesburg Test, which has also confirmed that India will replace South Africa as the top-ranked Test side when the table is updated at the end of the Centurion Test.

Broad had entered the Johannesburg Test in third position on 853 points but, after figures of two for 82 and six for 17, the 29-year-old earned 27 points to leapfrog Ashwin and South Africa's Dale Steyn into the top position. Broad now sits on 880 points and leads the India spinner by nine points. 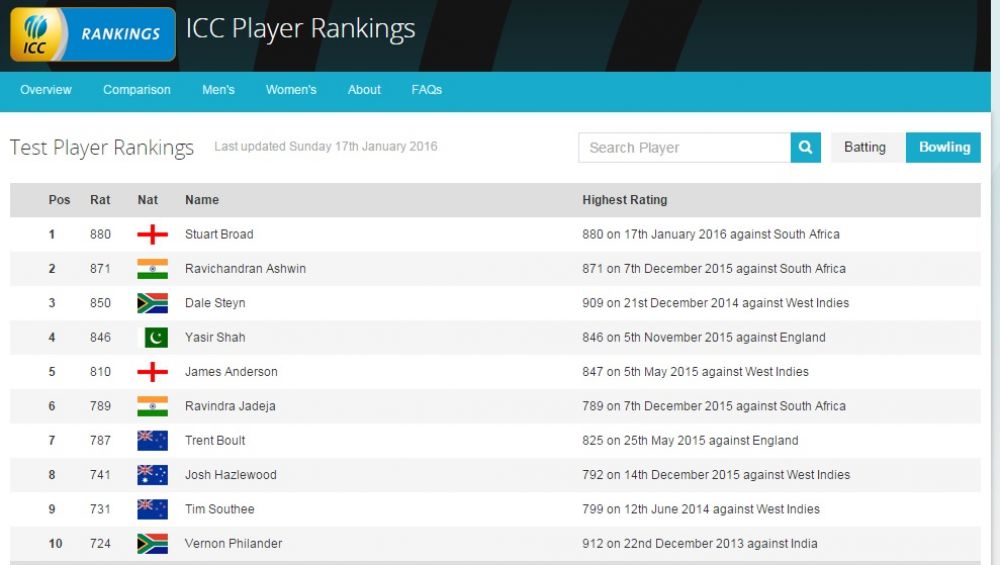 Broad is the first England bowler since Steve Harmison to top the ICC Player Rankings for Test Bowlers. Harmison had reached the top in 2004 and stayed there for 120 days. Before Harmison, Ian Botham had achieved the number-one ranking in 1980.

Broad has gained four places after earning 40 points since arriving in South Africa as he has picked up 15 wickets in three Tests to date. Ravindra Jadeja was the next best-placed Indian bowler at the sixth spot.

In the ICC rankings for Test Batsmen, England's Joe Root has reclaimed second position after scoring his ninth century in his 38th Test. Root's 110 helped England to take a slender 10-run lead for which he has been rewarded with a jump of two places.

When the ICC Test Championship table is updated following the conclusion of the Centurion Test, to be played from January 22-26, India will replace South Africa as the number-one ranked Test side.

This has been confirmed after England romped to a seven- wicket victory in the Johannesburg Test, which has given it a 2-0 lead in the four-Test series.

■Stuart Broad's 6-17 stars as England leave South Africa in tatters
■VIDEO| This day that year: Yuvraj Singh clobbered Stuard Broad for six sixes in an over
■Ashes 2015: The highs and lows of Stuart Broad