Experts call this ‘marketing science,’ where the pricing of products is fixed based on human psychology and these figures work like an illusion.

Hyderabad: When you pay Rs 99, or Rs 499, or even Rs 999, for a product, have you ever wondered what happens to that one rupee, which most of you do not claim as small change at the billing counter? Well, experts say it goes into the pockets of the staff at the counter, untaxed.

Contrary to popular perceptions, that rupee does not go into the accounts of retailers or manufacturers, as only the computer generated bill amount is accounted for. And that small unclaimed change runs into crores.

A majority of buyers making cash transactions have encountered the ‘no change’ problem. In most case, the teller at the counter either offers a small item of equal value or at times suggests that customers donate it to an offering box, but at the end of the day, most walk away without claiming the change. So, where does this money go? Certainly not to the retailer.

A simple analysis shows that if a staff member earns a minimum Rs 1 from one customer, it means Rs 100 from 100 customers, on a daily basis. Multiplied by 30 days, that is worth Rs 3,000 of ‘unaccounted’ money, which goes into a staff member’s personal kitty. While retailers use the illusion of figures ending with ‘9’ as part of their marketing strategies to attract a buyer’s eye, it is the counter staff who benefit in most cases, say experts. Most notably, this practise is prevalent in retail chains dealing in home appliances, grocery, home accessories, and garments.

Market research analysis expert Senthil Kumar says, “No retail outlet in any sector has developed a mechanism to monitor unclaimed or unbilled cash. The money deposited in a retailer’s account is proportionate to the computer registered figure. It is impossible to supervise the counters.”

He adds, “However, some managements run a physical check at the end of a business day, so the difference between the computer registered bills amounts and the actual cash collected can be determined. Swindling of unbilled cash is a breach of integrity and, if brought to the management’s notice, a staffer faces disciplinary action or handed a memo or transferred. However, this practise is only possible for cash transactions.”

Given that an estimated 82 per cent of purchases are made through digital transactions.

So who are the customers making cash purchases? A survey by Deccan Chronicle shows that most of them are pensioners, housewives and children. Swathi Reddy of Padma Rao Nagar says, “A monthly budget of Rs 2,500 is set aside for groceries and I have always made cash payments. After standing in long queues with heavy bags, many people usually don’t mind losing change and never give it a thought.” 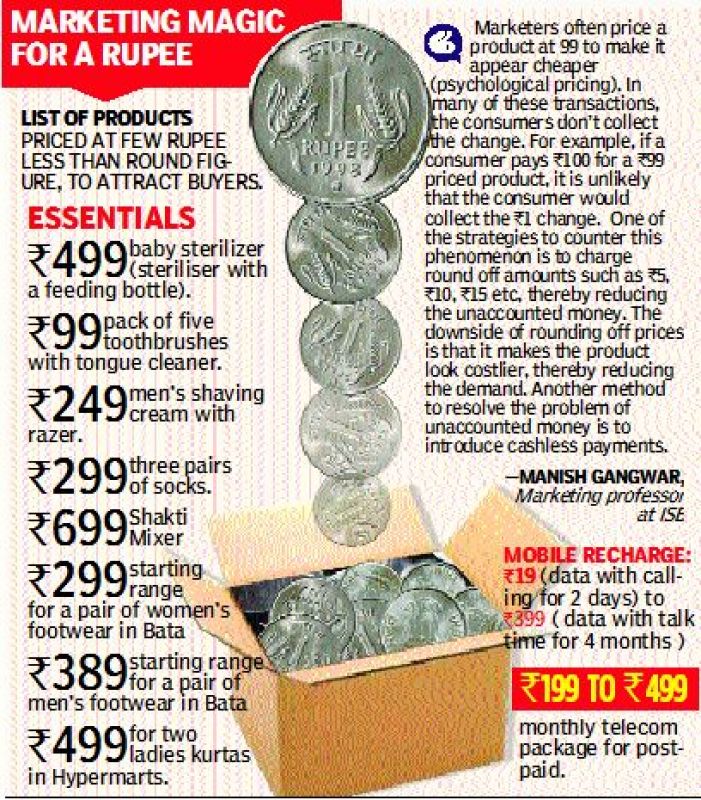 “Most buyers are in a hurry to exit, without realising that they have paid extra for a product that cost less than a round figure if they have not claimed the change,” adds retired engineer T. Venu Gopal.

Apart from retail outlets, a majority of staff behind counters collecting service charges in cash, such as those on property tax, water, electricity and Internet bills, birth and death certificates at E-sevas or state agencies, property registration documents, vehicle registration, and challans, cite the ‘chhutta’ (change) problem. Consumers in a hurry leave behind change that can go up to Rs 10, over and above the chai paani or tip.

Several retail outlets in some of the country’s busiest commercial markets, right from Sarojininagar and Chandni Chowk in Delhi to General Bazaar, King Koti and Abids in Hyderabad, over 90 per cent of shops accept only cash, in order to evade taxes and pocket unclaimed change.

Another sector where staffers have been pocketing unaccounted money for years is the state-run road transport authority. Following a stream of complaints against conductors not returning change to the Telangana State Road Transport Corporation (TSRTC) managing director, the board in April revamped ticket prices and rounded them off.

TSRTC conductor Ramana Naidu says, “Many conductors were issued warnings for not returning change, and the board could not estimate how much conductors were earning as revenues of each bus depend on the travel route. Now, ticket prices have been standardised at Rs 5, Rs 10, Rs 15 and Rs 20.”

Experts call this ‘marketing science,’ where the pricing of products is fixed based on human psychology and these figures work like an illusion. As the human brain reads numbers from left to right, the first numeral becomes the determinant, say marketing analysts.

Retail analyst Kalishetti Padmabhushan says, “Indians love value for money and for ages, this particular attitude was developed by shoe brand Bata, whose products bore price tags such as Rs 38.50, or Rs 85.30, and if we go back to the old model of retailing, it was Bata who introduced this kind of pricing, which everyone picked up eventually. This is called the ‘value market game’.”

The human mind always looks for less than Rs 100 or Rs 200, so Rs 99, for example, becomes more an emotional attachment and less a price, simply because it is lower than Rs 100, he adds.

On whether prices should be rounded off to avoid the change issue, he says, “Small change is pocketed, or even if a teller offers a candy, it will probably cost 30 paisa, which means the retailer earns 70 paisa. Retailers play on the emotions of a consumer. Take any super market, for instance, and the discounts they offer contain numbers that attract a consumer. I don’t think any retailer will change the pricing because if they round off prices, the figures won't attract consumers.”

Market analyst Namita Mukherjee adds, “In marketing, there is an entire science of numbers. Our brains tend to perceive the lower numbers, making us feel the product costs less than it does. We will actually discount the Rs 99 and feel we’re paying less. This phenomenon persists even in the case of very high numbers.”

Flipkart to hire 1.15 lakh for festivals

Forex reserves up by $135 billion in pandemic