Majority of these discrepancies are related to the last 16 years. Despite objections brought to the attention of the heads in districts, a majority of them sat on the files without taking any action. The number of objections thus accumulated touching the 10-lakh mark. 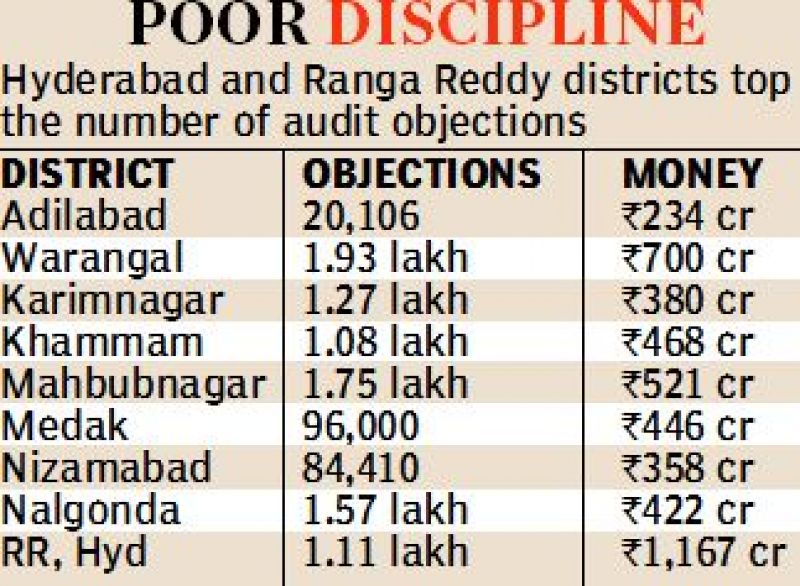 Categories 11 to 13 that include non-production of records, misappropriation of funds and excess payments are counted as serious financial violations. In these cases, the embezzled funds will be recovered from the government employees, wherever they might be posted later or even after superannuation from service.

In the rest of the objections, it was found that local staff did not follow due procedure (funds from one head was used for other but it was not entered properly, VAT was collected by local bodies but it was not remitted to concerned department etc.).

Ranga Reddy and Hyderabad districts have the dubious record of topping the list with 1.11 lakh objections worth Rs 1,167 crore while Adilabad with 20,106 objections (Rs 234 crore) was at the bottom.

Since clearing the pending list is difficult, officials are busy identifying objections 11 to 13 related to misappropriation.

A senior official said that they will be adopting a three pronged strategy "Our aim is to ensure action on 20 per cent of objections every quarter,” he said. A series of meetings have been planned for the purpose.

Petrol under GST: Council unlikely to bite the bullet