Mumbai/New Delhi: RBI Governor Raghuram Rajan, buffeted by political attacks, said on Saturday that he would step down when his term ends in September to return to academia, ending intense speculation over his future.

Stating in a message to the RBI that his work on containing inflation and cleaning up books of the banks was “yet to be completed,” Dr Rajan, 53, said,
“While I was open to seeing these developments through, on due reflection, and after consultation with the government, I want to share with you that I will be returning to academia when my term as Governor ends on September 4, 2016.”

“I am an academic and I have always made it clear that my ultimate home is in the realm of ideas,” he said. He said he would “of course, always be available to serve my country when needed.”

He said he believed the bank had delivered on objectives including lowering the inflation rate, stabilising the rupee and tackling India’s mountain of bad loans. Inflation has fallen from double-digit levels when the took over, to 5.8 per cent now. 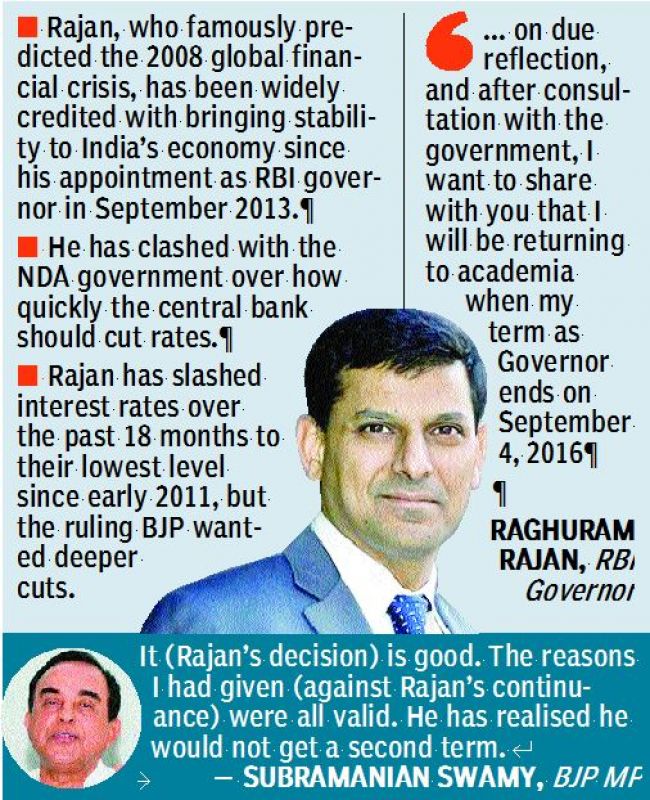 Dr Rajan, who took charge as RBI Governor in September 2013 with a three-year term, had ruffled feathers in the saffron camp with his outspoken views on issues like intolerance and his remarks about India being “one-eyed king in land of blind.”

Speculation has been rife over whether Dr Rajan, a former IMF chief economist known to have predicted the 2008 global financial crisis, would get a second term after BJP leader Subramanian Swamy accused him of destroying the economy with his hawkish stance on interest rates. He had also questioned whether Rajan was “mentally, fully Indian” as he holds a US Green Card, among other allegations.

The decision of Dr Rajan set off speculation about his successor and the impact it could have on stock and bond markets when they open on Monday. Finance minister Arun Jaitley welcomed the decision.