Hyderabad: The GST may be set for a rollout but the tax rates will be kept a secret till the last minute.

The government plans to announce the GST rates for goods and services just a few hours before the rollout on July 1. This is to ensure that the manufacturers do not resort to a slowdown or increase in production after learning which commodity will be taxed at a lower or higher rate.

Instances of manufacturers resorting to bringing down their production and retailers indulging in lower stocking of goods are being reported from various parts of the country for the past two-three weeks ahead of GST launch, leading to shortage of goods and increase in prices.

This trend is being witnessed mostly in the production and sale of medicines and drugs. There has been a lot of speculation over how medicines would be taxed in the GST regime. While some reports say it would be lower than existing VAT rates, some reports indicate higher tax rates. 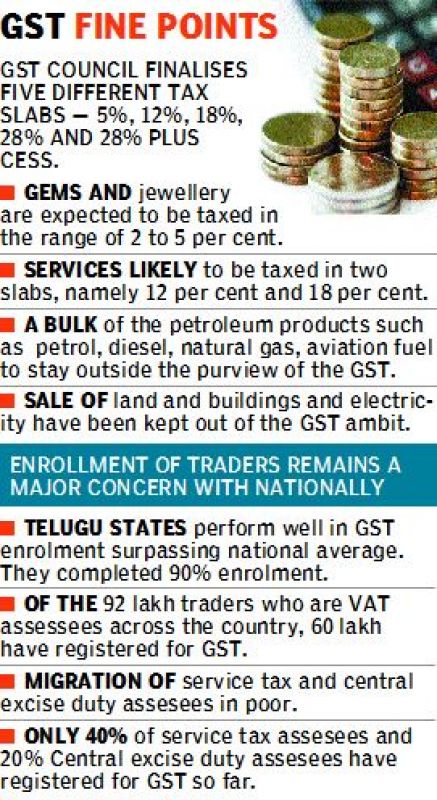 Due to this, manufacturers have reportedly reduced production while retailers are keeping lower stocks to ensure that the old stock gets cleared before July 1 as they will not be able to pass on the increased burden to consumers in case of increase in GST rate due to fixed MRP.

Other sectors like textiles, fast moving consumer goods etc. are also feeling the pinch ahead of GST rollout.

To check this trend and to avoid any exploitation, the GST Council has decided to keep the tax rates a secret till the July 1 launch.

Finance minister Etala Rajender, who is part of the GST Council, said, “The GST rates will be more or less finalised in the third week of this month during the GST Council meeting to be held in Srinagar for two days. At present, the GST Council's sub-panel of is doing an exercise on categorising goods and services into GST slabs. The panel will submit the report to GST Coun-cil this week, which will be discussed at the meeting to be held on May 18 and 19.”

Mr Rajender said the final tax rates will be kept confidential till the rollout to prevent any kind of business manipulations by manufacturers and retailers.

38 coal blocks up for auction for commercial mining: Coal Ministry