Earth economy: Riches from the rags

I think it was 12 years ago my cousin Rohan called me a “risk factor” in the family business. That pretty much sums up my efforts that span two decades in the garments business. It didn’t start off as profitable but it gave me a complete understanding of how organised retail worked globally, work ethic and culture — call it a hands-on MBA.

And coming from a family that has enjoyed years of sports, the virtues of “dreaming big and never give up” never really left me.

It started a little over five years ago, after I joined my family’s recycling business — where old and used imported woollen and synthetic pullovers were being converted into yarn for the blanket-manufacturing industry. But this never measured upto the creativity of the garment business and left me bored until I stumbled upon some bedsheets and table linen leftovers from the hotel industry. The raddiwala DNA was awakened.

What followed were a series of crazy thoughts, the opening up of a closed garment unit and the christening of Authentic Impex as the domestic arm of Texool. The idea was simple — we would create the new, from the old. The bags were born. The ‘I’m not a virgin’ tag was ideated as part of a programme that never took off but now, we have another one which says, ‘I’m so wasted’. It made the products catchy.

As they say, luck favours the brave and one day, right in the middle of a cricket match between friends, the owners of Cotton World asked me to drop by to show samples of the upcycled cloth bags, which eventually became a 15,000 bags a month contract. 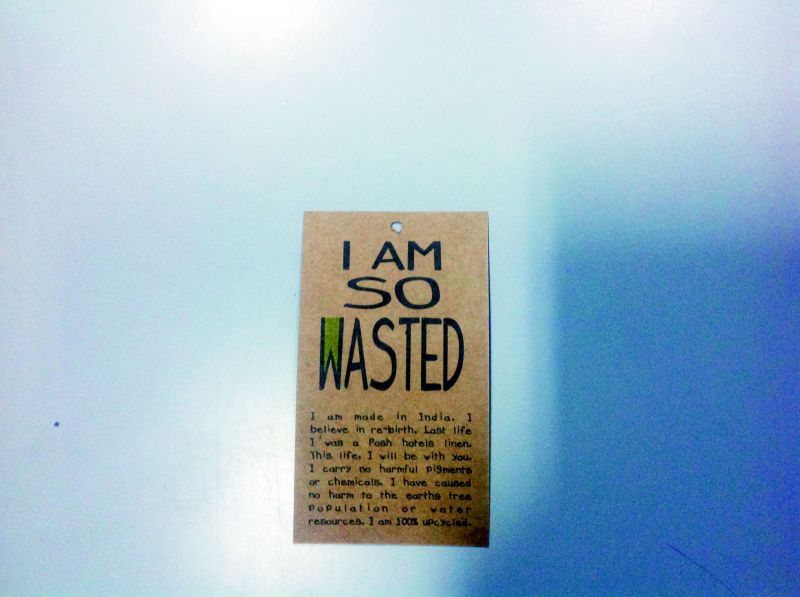 All this led to a deep study into the horrific impact plastic and non eco-friendly packaging had been having on the environment. This ‘education’ overwrote a lifetime of studying which never extended beyond clearing exams. I felt I had finally matured and even began taking orders at a loss to ensure clients wouldn't pick non eco-friendly products.

Also, more than being just profitable, there is now pride in how a small start-up has reduced a large carbon footprint on the planet and then there’s the scope of making millions of upcyled textile products each month.

The ingredients are now in place to be able to upcycle more and save even more. More importantly, there’s motivation here for out-of-the box thinkers. But having said that there is some disappointment over the fact that the general feedback here in India is more on how the products are “nice” and competitively priced, rather than an appreciation of their virtues. I hope that changes soon.

The writer runs Texool, which upcycles discarded cloth from the West and turns them into bags for brands such as Disney and Steve Madden.

Exports jump by 24% in April