Visakhapatnam: The state government amended certain criteria to help a Chinese firm avail incentives to set up a solar panel manufacturing facility at Vizag. The APIIC will also provide land for outright sale, instead of 99-year lease to the company.

The State Investment Promotion Board (SIPB) had cleared the proposal of Hereon Solar Private Limited (HSPL) to set up multi-crystalline solar PV cells manufacturing unit in Vizag. HSPL is a joint venture firm of M/s Hareon Solar of China and M/s. Dalmia Bharat Group of India. 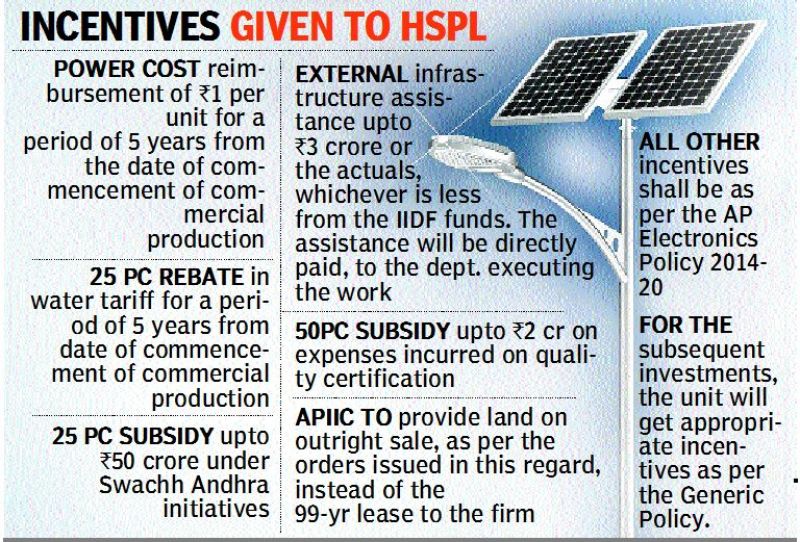 The plant will be established in a phased manner with an investment of Rs 1,188 crore with an employment potential of 1,162 persons. The initial capacity of plant would be 160 MW which will be ramped up to 1,000 MW in the next 3 years.

HSPL was allotted around 33 acres in Achyuthapuram along with Trina Solar, another Chinese firm in the same area. Trina Solar has been allotted 90 acres. Though Trina Solar had conducted Bhoomi Puja a few months ago, the work is yet to begin.

The delay in grounding the project by Trina Solar is said to be on the incentives that are offered to the company.  It is learnt that basing on the new clause of ‘outright sale of land’ to HSPL, the Trina Solar may also pitch for the same.

China’s Trina Solar, in collaboration with Indian company Welspun Renewables of Mumbai, would be setting up a solar panels-photovoltaic cells manufacturing plant at Achyuthapuram SEZ in the district with an investment of Rs 3,000 crore.

Notably, Welspun Renewables signed an agreement with the state government at the World Economic Forum held at Davos in January, last year, to set up solar power projects at an estimated cost of Rs 700 crore. The government had already signed power agreements with Welspun.

Coca-Cola to set up 2nd manufacturing plant in Telangana

LIC IPO a treat for policyholders