Mumbai: Even though profitability remains under pressure, the bad loan situation in the banking sector seems to be stabilising, going by the numbers posted by lenders for the third quarter ended December 31, 2018. However, analysts believe it is still not clear if all the legacy bad loans have been recognised by banks and they would rather wait for another quarter of moderation in growth of bad loans, which could indicate that the recognition cycle is over. 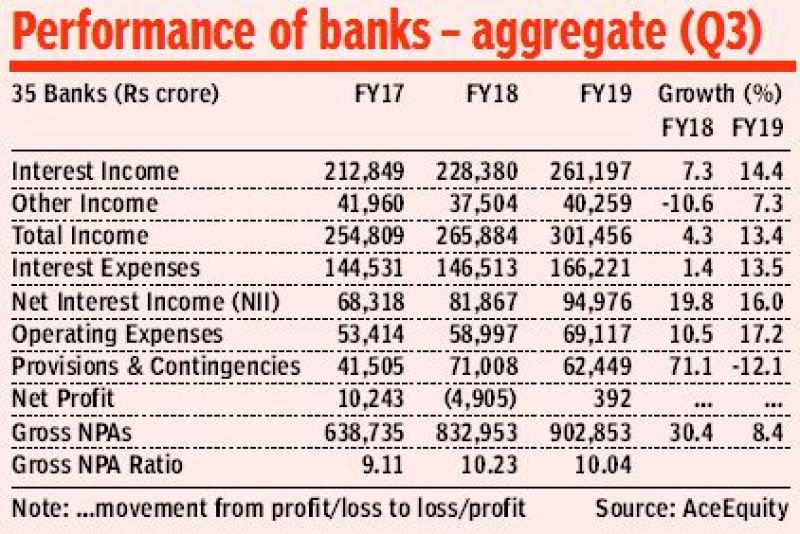 On the profitability front, too, the state-owned lenders lagged behind. Barring the top public sector banks such as State Bank of India (net profit of Rs 3,955 crore during Q3FY19 as against net loss of Rs 2,416 crore in corresponding period last year), Bank of Baroda (321.6 percent year-on-year rise at Rs 471.21 crore) and Canara Bank, most other PSBs continued to report losses.

In comparison, the net profit of private lenders rose by 3 per cent to Rs 11,501 crore in Q3FY19 vis-a-vis growth of over 12 per cent (Rs 11,162 crore) during corresponding period of the previous year.

The cumulative net profit of all banks stood at meagre Rs 392 crore during the third quarter.

A banking analyst said, “Most of the public sector banks have not reported incrementally higher slippages last quarter, which provides some comfort. Since public sector banks are undervalued, any improvement in their asset quality will be taken positively by investors. Earnings recovery could start happening from FY20 for PSU banks.”

India, US have finalised defence deals worth USD 3 billion: Trump on talks with Modi