City Union had gross bad loans of 2.9 per cent for the quarter ending December, below its regional peers and its larger Mumbai-based rivals.

A policy of cautious lending to the silk weavers and shopkeepers of Tamil Nadu has allowed a small local bank to outpace the largest Indian banks in terms of share price performance.

City Union Bank, a small lender based in Kumbakonam, has risen more than 27 per cent over the last 12 months, the best performance of any Indian lender in the Bankex index after Axis Bank and State Bank of India, thanks to its successful record in lending to small and medium sized enterprises, or SME sector, while keeping a lid on bad loans.

“They are the gold standard in SME lending,” said Yuvraj Choudhary, an analyst at Anand Rathi Financial Services. “They have very good insight into how small industries work in their region.”

SME lending in India tends to be a higher margin business, because banks can charge hefty interest rates, but many avoid the segment because of the difficulty in assessing risks and the danger of piling on bad loans.

Many of the country’s banks are struggling under the weight of a mountain of problem assets, denting their share prices and posing a threat to the wider Indian economy. 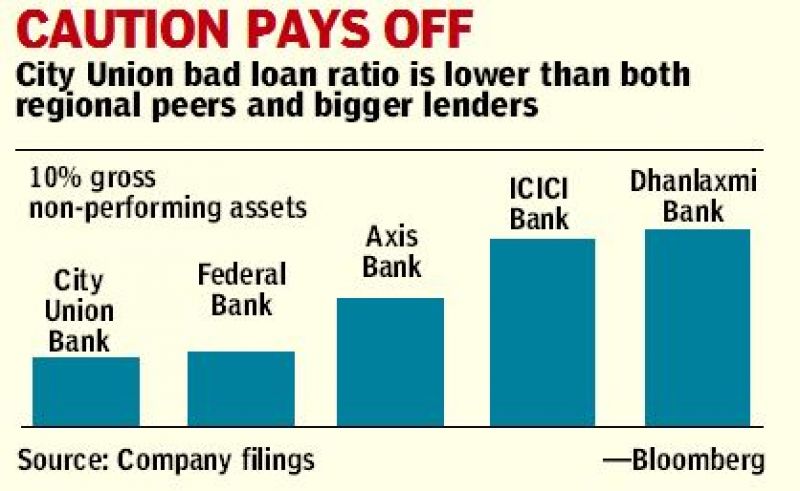 In addition, SMEs have been especially vulnerable to recent economic upheavals such as the temporary ban on high-valued currency notes in 2016, and the introduction of a nationwide Goods and Services Tax the following year. City Union had gross bad loans of 2.9 per cent for the quarter ending December, below its regional peers and its larger Mumbai-based rivals.

Meanwhile, its net interest margin of 4.4 per cen puts it in the top quartile of India’s banking system.

Many of City Union’s customers are small businesses in Tamil Nadu’s textile industry, working on different parts of the supply chain from spinning and weaving to garment manufacture. The bank also lends to the retail and wholesale dealers selling anything from toothpaste to spare parts for trucks, whose shops line the streets of towns across the state.

“Unlike larger lenders, City Union does more relationship-based lending, catering to the needs of the SME borrower, which can be quite volatile,” said Pankaj Agarwal, an analyst at Ambit Capital. “That’s why they can charge a premium in this relatively untapped segment.”

Another positive is City Union’s relatively stable history at a time when faster growing lenders with similar profit numbers have sprung unpleasant surprises. Yes Bank, whose shares have dropped 47 per cent over the past 12 months, has only recently resolved a leadership crisis. IndusInd Bank, down nearly 9 per cent, last year disclosed significant exposure to the troubled infrastructure lender IL&FS. Still, a smaller ratio of low-cost deposits in City Union’s liabilities compared with its peers could weigh on profits at a time when money market rates are tightening. The bank’s cost of funds rose by eight basis points in the last quarter.

But the bank has never reported a loss and has always announced a dividend in each of the previous 115 years, according to Chief Executive Officer N. Kamakodi.