The very first-generation of Honda’s Amaze had established itself as a valuable brand for the company in many ways. Apart from being the first diesel from Honda, it was also the first successful establishment from the carmaker in the compact sedan segment. Within the span of 5 years, it went on to become a huge sales success as the second bestseller in the segment (after the Maruti Dzire) and the second bestselling Honda too (after the City). Overall, the Amaze is a very important product for Honda, also Honda has taken lots of learning from the first-generation of Amaze to take the game up several notches for its next-generation Amaze. We recently got a chance to drive the new generation Amaze in city roads. So does it tick all the right boxes?

Design
Unlike the first-gen, which was built built-to-a-cost Brio platform, the second-gen Amaze gets an all-new platform. The Japenese carmaker claims to have engineered many updates in the new Amaze, based on user feedback. The new gen Amaze gets better fuel economy, updated premium feel and strengths like space and practicality have been enhanced. The design of the new Amaze is much more striking now. The soft curves on the front part of the outgoing model have given way to a much sharper, taller nose. The rear design is a little flat and bulky and even the sharp angular tail lamps aren’t able to disguise its bulk. Overall, the design is a little boxy but is much more striking than the safe design of the first generation car.

Engine
There is a 1199cc  petrol and a 1498cc diesel, that get a CVT automatic option alongside a manual. We drove the petrol CVT in Delhi’s bumpy roads as well as the city’s traffic, and the 90hp at 6000rpm and 110Nm 4800rpm of torque did respond very well. The gearbox is smooth and feels even better with its ‘D’ mode. In traffic, it is painless to drive, which is its biggest strength. As far as safety features are concerned, the Amaze comes with dual airbags and ABS, as standard. You also get features like rear parking sensors, in the lower variants, while the top end VX variant also gets a rear parking camera. 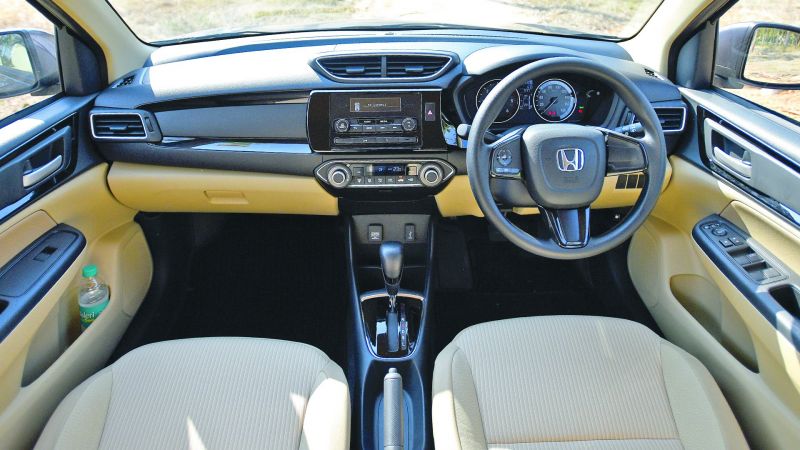 Performance
The petrol engine is very refined in the way it does the job. As we mentioned earlier, It delivers a great performance in the city. There are prominent tugs in power beyond 2,500 rpm and 4000 rpm, and this engine feels most energetic beyond 5,500 rpm, spinning all the way until 7000 rpm. But sadly, in many day-to-day situations, the performance at mid-range is not up to mark. Honda has tweaked the gear ratios of the petrol-manual which now gets a taller final drive but shorter first, second and third gears (for better acceleration). The fourth gear is significantly taller and this is noticeable while trying to overtake traffic at highway speeds. Overall acceleration timings are almost identical to the older car, and as its diesel variant, the clutch travel is a bit long and its springy characteristic demands a conscious effort to drive smoothly. Body roll is on the higher side, again as a result of the softer suspension set-up. What’s nice though are the brakes that offer great feedback and inspire confidence while shedding speed.

Verdict
The Honda Amaze really shines in the city with a silky smooth transmission and its much-improved sound insulation. The space for passengers is nearly the best in the segment as well, making it great for families.

Of course, the Amaze costs more now, considering that it's got a lot more. Prices for the petrol Amaze start at `5.87 lakh and go all the way up to `8.58 lakh, (all prices ex-showroom India). With these price tags, Honda still hasn’t managed to undercut its biggest rival, the Maruti Suzuki Dzire. Apart from this, Amaze also falls short on its mediocre high-speed dynamics. However, despite these shortcomings, the Amaze’s drive was so pleasurable that we really have to give it a solid thumbs up. So, if you’re on the lookout for a hassle-free commuter for the city, this is one car that should not miss your list.