The Ford EcoSport facelift is expected to launch on November 9, 2017. 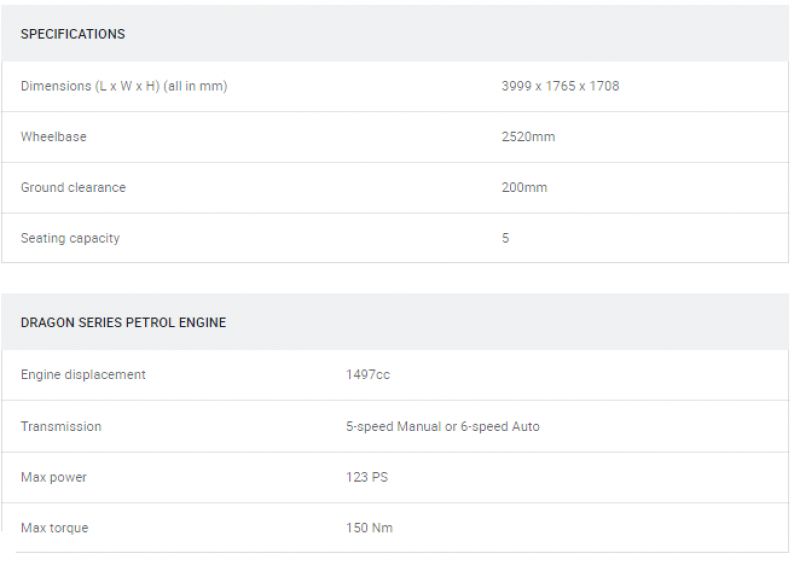 Following the standard procedure, the Ford EcoSport facelift will be available in 5 variants - Ambiente, Trend, Trend+, Titanium and Titanium+. This time around, Ford is bringing a new and more powerful 1.5-litre, 3-cylinder Ti-VCT Dragon series petrol engine which will replace the existing 1.5-litre, 4-cylinder petrol engine. The 1.0-litre Ecoboost and the 1.5-litre TCDi will continue with their duties. Since the Ford EcoSport’s launch in 2013, the competition in the sub-4 metre segment has only increased with the entry of the successful Maruti Vitara Brezza, Tata Nexon, Mahindra TUV300 and the Honda WR-V.

While we eagerly await the launch of the EcoSport, a special edition S model has already been spiedwith the ‘S’ badging hinting towards a sportier model, much like the Figo S and Figo Aspire S. We’ll keep you updated with further details on the Ford EcoSport S but for now, let’s get down with the specifications, features and dimensions of the sub-4 metre compact SUV.

As we can see, the base model of the upcoming Ford EcoSport facelift is equipped with all the features a regular buyer would look for. It gets safety features such as dual airbags and ABS with EBD as standard along with a modern audio system, which is usually absent in base models of most vehicles. This should make it a smart value-for-money option, unless there’s a substantial hike in its starting price, that is.

On top of the standard features available in Ambient, the Trend variant gets the 8 inch floating touchscreen infotainment screen which forms the essence of the newly designed dashboard in EcoSport facelift. If the MyFord dock, which places your phone securely to be used as a touchscreen unit, cannot serve its purpose, then you can go for the Trend variant. It also gets Apple CarPlay and Android Auto, 2 front tweeters, steering-mounted controls and rear seat back pockets, making it a tad convenient and much more likeable.

The Trend+ variant gets some necessary goodies which increases the practicality factor further. Both short and tall drivers should be able to find a good driving position thanks to height adjustable driver’s seat. Addition of front armrest means you can relax your left arm when not working on the gear lever and reverse parking sensors will ease parking the compact SUV in tight spots.

The Titanium variant with the automatic transmission get features like HLA (hill launch assist), ESC (electronic stability control), EBA (emergency brake assist), TCS (traction control system) and sporty paddle shifters. So, if you are someone looking for the extra oomph factor coupled with higher levels of attention to detail in the cabin, then go for the Titanium model.

Titanium+ variant will serve buyers who consider safety as sacrosanct as it gets 6 airbags and ISOFIX mounts for child seats. This variant comes with nifty features which will perfectly suit highway and long distance travellers while keeping the minor niggles under constant check.

While prices will only be revealed after the launch, we expect Ford to increase the prices by a small margin given the features that are available from the base variant itself, so don't expect a killer pricing. Stay tuned to Cardekho for a detailed review and variant pricing story on the Ford EcoSport Facelift to help you make a better buying decision.