Every model offers something for everyone and there isn’t an easy way to pick one out.

Car buyers shopping for a compact SUV in the Rs 10 lakh price bracket have three major options to choose from at the moment - the Tata Nexon, Maruti Vitara Brezza and the Ford EcoSport. All these models and their variants have similar prices and features. So which model and variant is the right one for you and why?

Let's start off with a head-on comparison between the various features on offer in the said models. Note that all prices mentioned below are ex-showroom, Delhi. We have considered only important features that most car owners use on a daily basis or are critical in the segment. 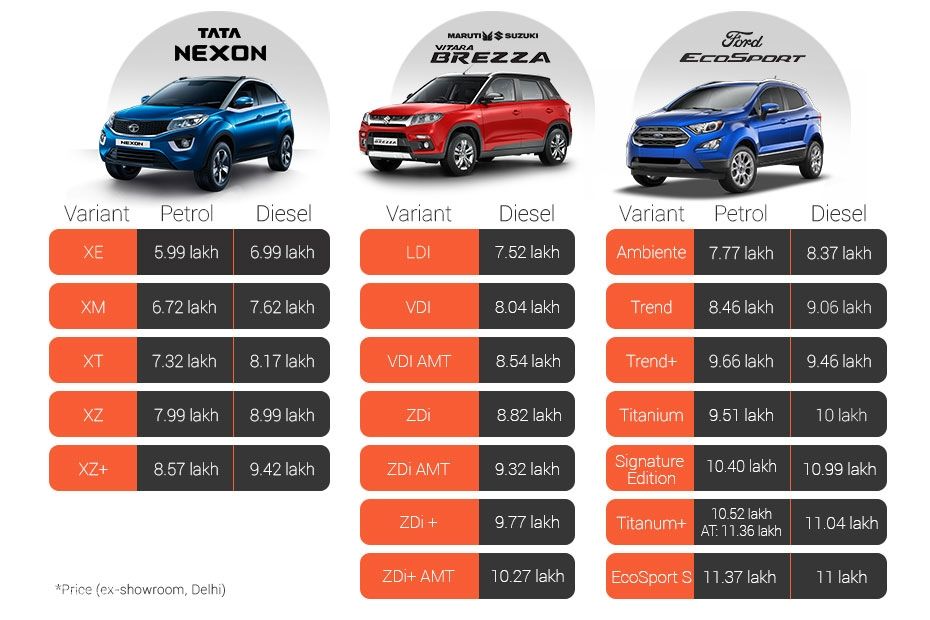 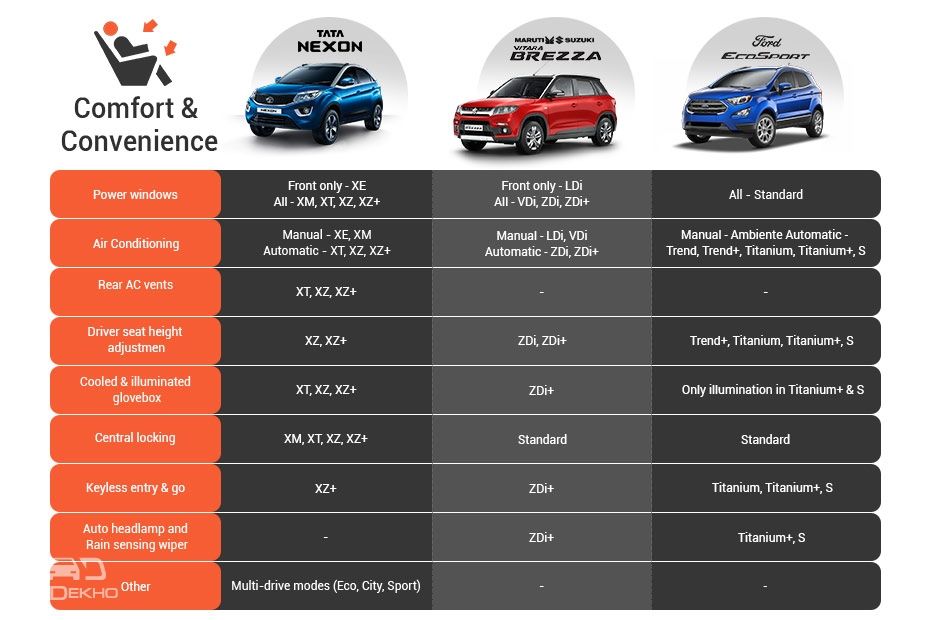 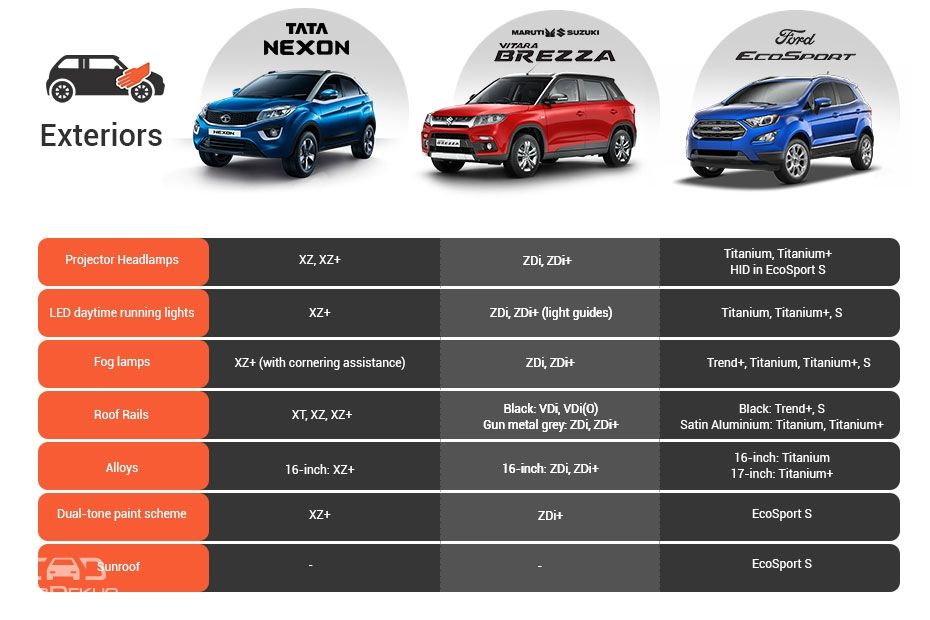 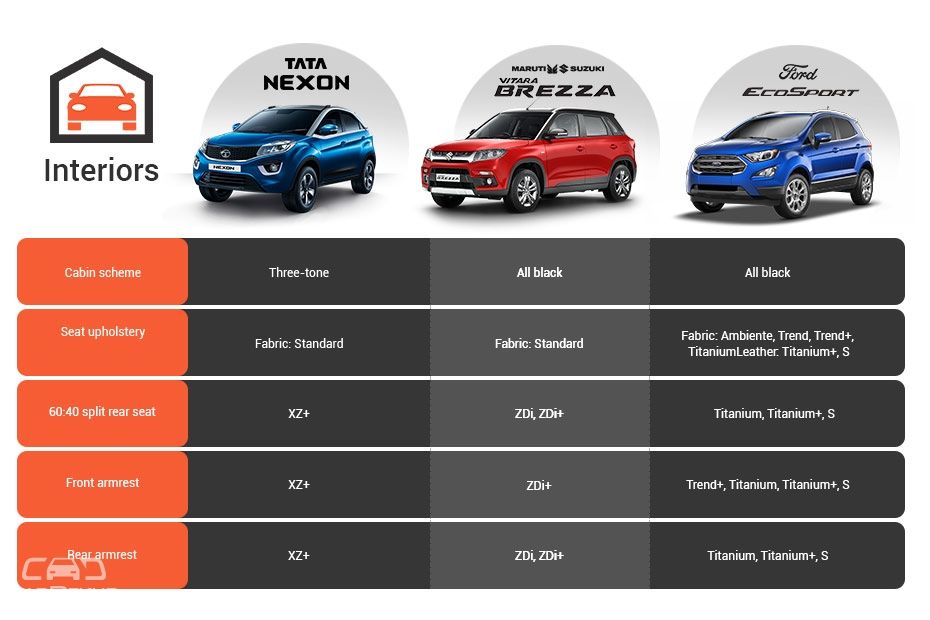 Going by the above comparison, the Ford EcoSport is the most feature-loaded offering of the three SUVs. However, it is the Tata Nexon that offers the most features for its price and thus scores high on the value-for-money factor. Meanwhile, the Maruti Vitara Brezza strikes a near perfect balance between the features on offer and price. Bottomline: Every model offers something for everyone and there isn’t an easy way to pick one out.

Hence, let's narrow down our comparison by answering a few questions that an average Indian customer looks for in a compact SUV:

Which is the safest compact SUV? What variant should you choose? 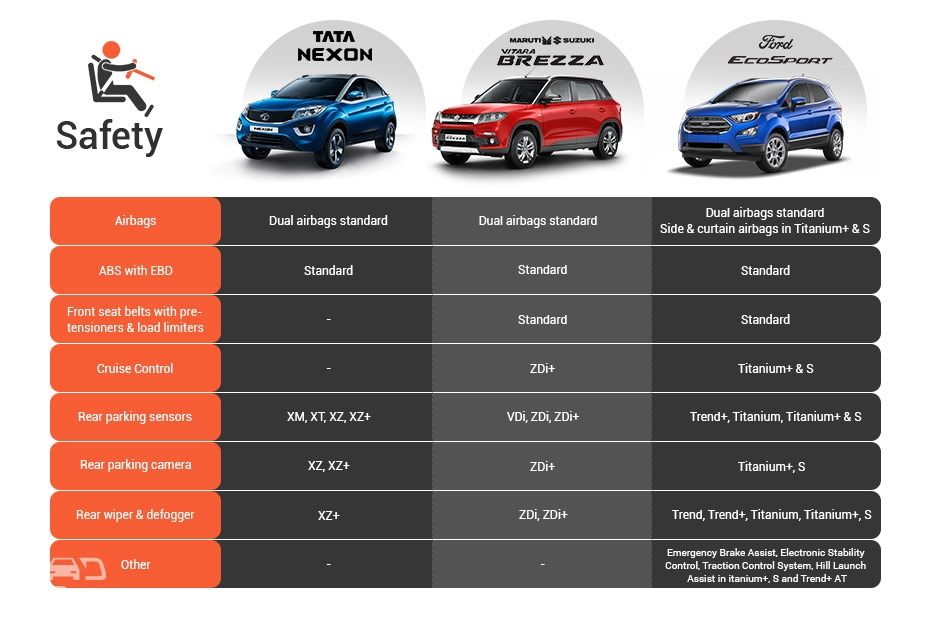 Which model has the best infotainment & sound system? 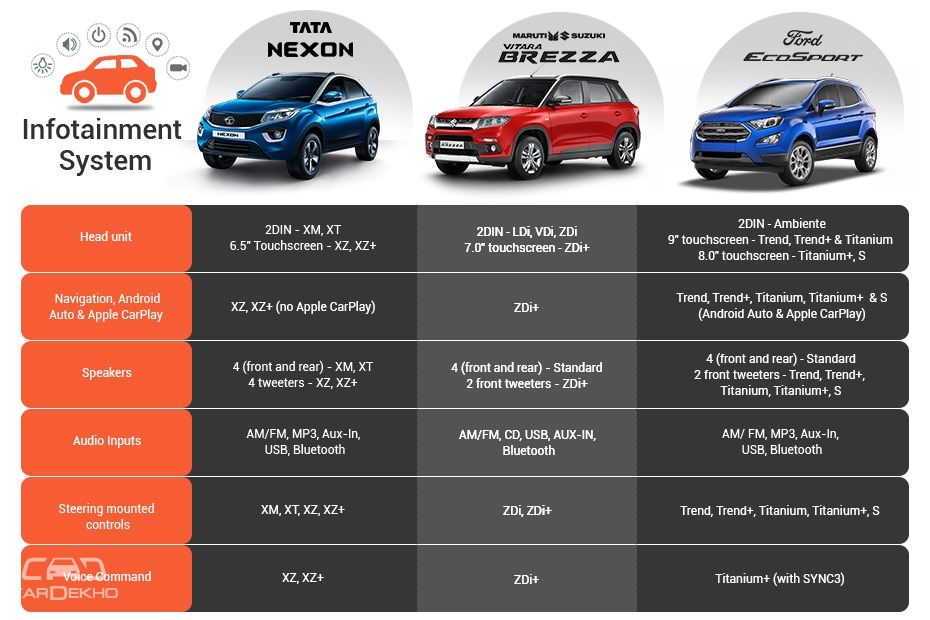 Tata Nexon. The XZ and XZ+ variants of the Nexon come with a 6.5-inch touchscreen system. While it’s smaller compared to the ones in the Vitara Brezza and the EcoSport, it’s coupled with the best sound system in the sub Rs. 10 lakh price range - a Harman-sourced 8 speaker setup, including 4 tweeters on each door. If you are an audiophile and want the best stock sound system in your car, buy the Nexon. The freestanding display also helps the car look more premium and is fairly bright and easy to operate. It also gets Android Auto, Navigation and rear camera support.

Which model and variant to buy if you are on a tight budget?

Tata Nexon XM. Priced at Rs. 6.72 lakh for the petrol model and Rs. 7.62 lakh for the diesel variant (ex-showroom, Delhi), the Nexon XM  gets all the necessary features for those on a budget. The Nexon XM's feature list includes dual airbags, ABS with EBD, central locking, rear parking sensors, all four power windows, manual air conditioning, and even a 2DIN music system with 4 speakers and steering-mounted audio controls.

Those with a slightly higher budget can also check out the Ford EcoSport Trend that is priced at Rs 8.46 lakh and Rs. 9.06 lakh (ex-showroom, Delhi) for the petrol and diesel models, respectively. It gets features like dual airbags, ABS with EBD, rear wiper and defogger, all power windows, 6.5-inch touchscreen infotainment system with navigation, Apple CarPlay and Android Auto, 6 speakers, including 2 tweeters, steering-mounted audio controls, and Ford's SYNC3 voice command system.

Which is the best automatic compact SUV?

If you have already decided to go for a petrol automatic, the EcoSport Titanium+ AT makes a lot of sense for your needs. It gets a 6-speed fully automatic gearbox and is loaded to the brim with features. Since the Vitara Brezza isn't offered with a petrol engine, the only other option you have is the Nexon automatic. However, the Tata compact SUV only gets an AMT gearbox, rather than a true automatic. This results in slightly jerky gearshifts and lower refinement levels.

Which model and variant offers the most value for money?

Tata Nexon XZ. This variant of the Nexon comes with all bells and whistles that you would expect from a car in its price bracket. It includes dual front airbags, ABS with EBD, rear parking sensors with camera, automatic climate control, driver seat height adjustment, rear AC vents and a cooled and illuminated glovebox. It also gets a 6.5-inch touchscreen infotainment system with navigation and Android Auto, steering-mounted audio controls, 4 speakers & 4 tweeters and voice command. The Nexon XZ looks the part as well, thanks to the presence of projector headlamps and roof rails.

The only gripe we have from this variant is the missing alloy wheels, which owners could buy from the aftermarket as well. However, at a price of Rs. 7.99 lakh and Rs. 8.99 lakh (ex-showroom, Delhi) for the petrol and diesel variants, respectively, the Tata Nexon XZ surely offers the most features for your bucks.