You come across certain events which change the track of your life. An apple did that for Newton and racism did if for Gandhi. I would also share one of my life changing incidents, probably not something very significant as above, but it started my love for motorcycles. With some interest in cars, I was looking at an automotive magazine when I first laid my eyes on the MV Agusta F4 and everything came to stand still after that. 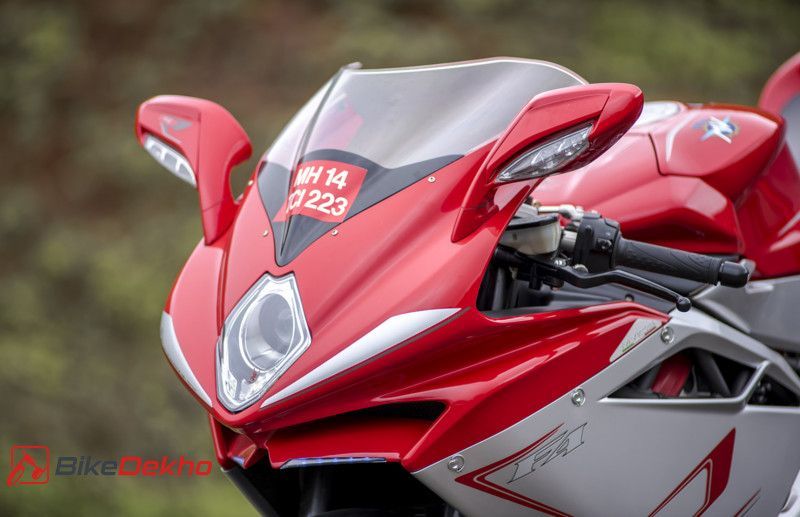 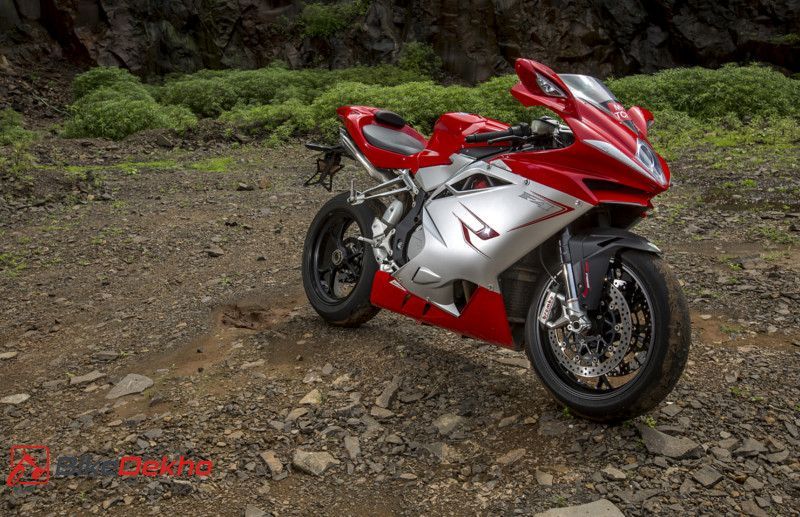 Before I start talking about the styling of the bike, I would like to state that the MV Agusta F4 is the most beautiful motorcycle that has hit the tarmac in the 21st century. Designed by the legendary Massimo Tamburini, I feel that the F4 has to be among his most gorgeous creations of motorcycle art. The F4 is a huge motorcycle given the compact dimensions of modern supersport motorcycles and it has that hint of old school madness about its styling. Despite the fact that designers have become slaves of aerodynamics, the F4 stands out as a bike which is able to balance the scientific need of aerodynamic efficiency with dazzling aesthetics. The raked out faring houses the iconic diamond-type headlight which looks like the crown jewel of the bike. Below it is the beautifully crafted air-intake, though I must say the LED strip on it looks gaudy and an overkill. 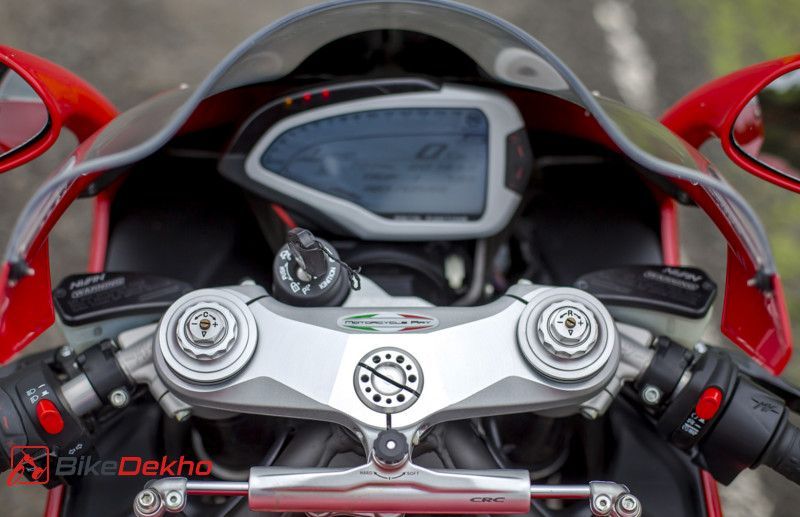 The large fairing conceals the in-line four motor with few functional vents and on top there is a small scoop that sensually teases the trellis frame and the red engine head. The sculpted tank and the beautiful lines of the motorcycle is best appreciated in profile. The single-sided swingarm, mirror-mounted turn indicators that has a functional air conduit, and the masterfully crafted tail section are the other design highlights of the bike. 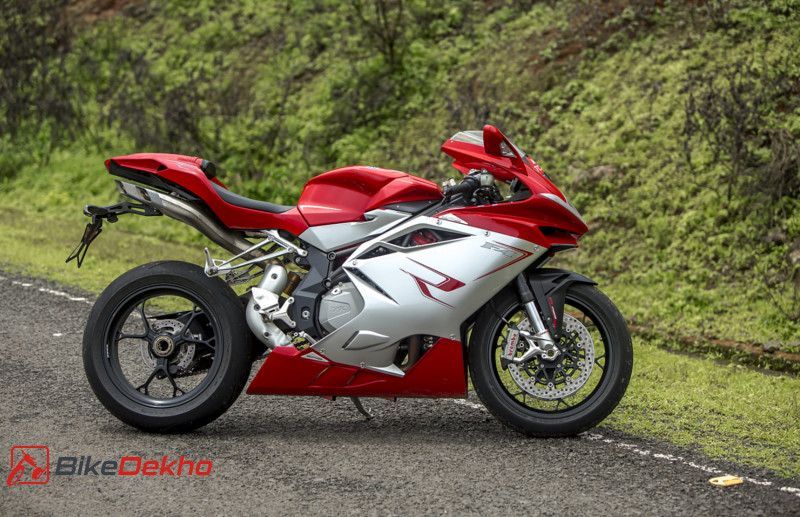 Walk around the bike and you see the under-seat exhaust pipes that look stunning, but I must admit that the round pipes on its predecessor looked better. The way that Tamburini managed to amalgamate sharp lines with subtle curves makes the F4 just stand out among its peers and the enormity of his genius can be made from the fact that the basic design was unveiled in 1998! The instrument cluster is an all-digital LCD unit with blue backlight that has tonnes of information and is nicely laid out. Switchgear quality is average and build quality for the motorcycle could have been better. The panel gaps on the bike were also uneven, which on such a premium motorcycle was disappointing. 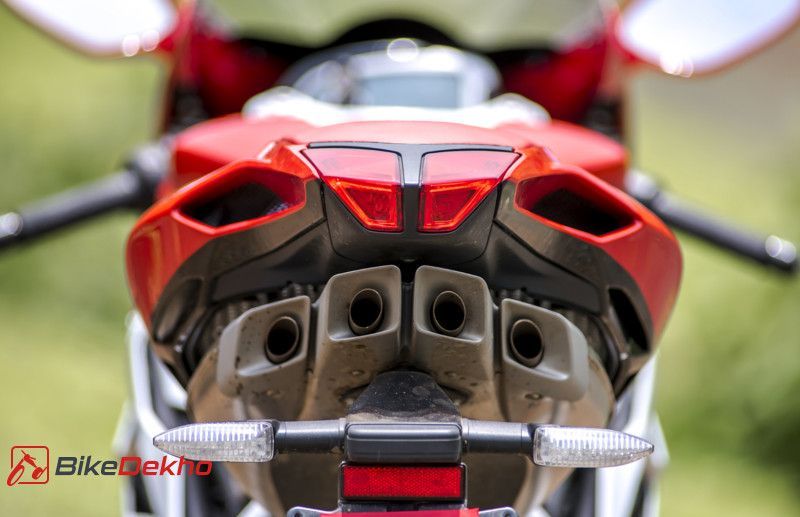 The inline 4 motor was developed with the help of Ferrari as the late Claudio Castiglioni, the man responsible for resurrecting the MV Agusta brand enjoyed a great camaraderie with Pierro Ferrari. The ‘F4’ nomenclature is supposed to stand for Ferrari and ‘4’ for the four-cylinder mill. The original displacement for the motor was 750cc which was expanded to a full blown litre-class in 2005 with the motor pushing out 166PS. MV Agusta engineers have been constantly working their magic on the motor to extract more output and in the current guise it pushes out 198PS at a heady 13,400rpm and 111Nm of peak torque. Swing a leg over and the large dimensions of the bike is evident; also the saddle height is pretty high and is more suited for 6ft-tall riders. The clip-on handlebars and rear-set footpegs result in a crouched and uncomfortable riding posture for street use but perfect for the race track. Thumb the starter and the engine comes to live with a rapturous roar. I opened the throttle gently and the bike gathered moment in a sane manner, but the moment I went a bit hard on the throttle, the Italian beauty just shot off with the front tyre saluting the tarmac. In Sport mode, the power delivery and throttle response is aggressive and I feel it should only be restricted to the race track. There is also eight levels of traction control system. 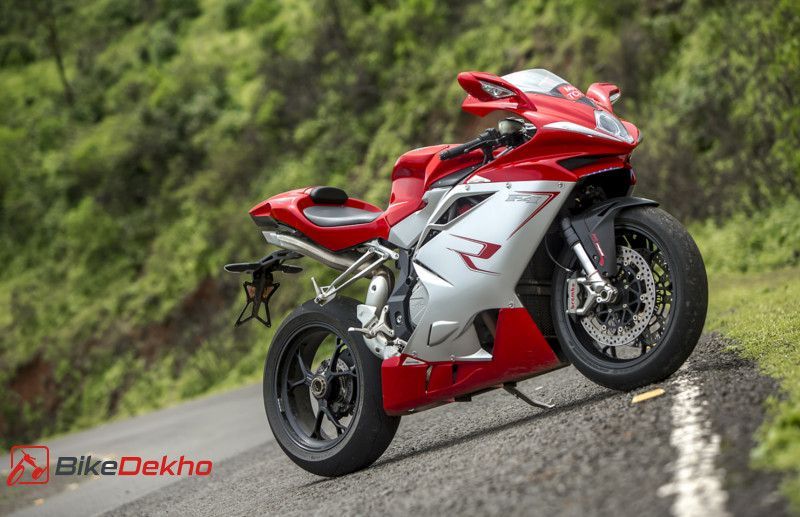 In Normal mode, the F4R felt more relaxed to ride and this is the mode which I reckon most owners will be comfortable in for the majority of their time on the bike. There is also Rain mode on the bike but luckily for us we didn’t have to use it when shooting the bike. The MV Agusta F4R has a comprehensive electronic package which means you can customise the electronic settings based on your needs, which includes throttle response, torque output, engine braking and rev limiter. Given the restricted time I couldn’t actually play through the settings but I must say that the UI on the F4R is complex and given the small buttons it becomes even more difficult to use with riding gloves. 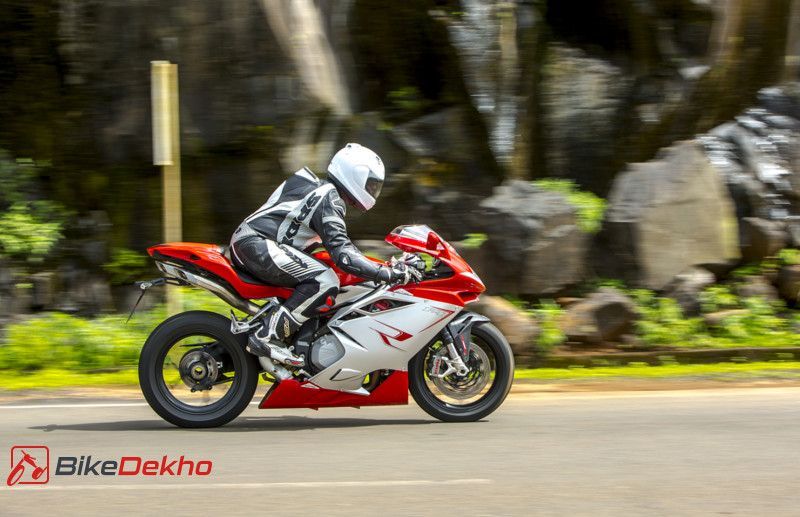 The surge of power is available throughout the rev band and a morsel of throttle input is enough to overtake anything in front. The wild exhaust note adds to the drama as the engine reaches its rev limit with that inline-four snarl taking every onlooker by surprise, but having heard the older F4 motor, the current exhaust system didn’t have the same ferocious tone. The gearbox offered good shift quality but the quickshifter system was a bit dicey as we encountered some false neutrals. The engine isn’t as refined as its inline four rivals from Japan and heat dissipation on the bike is inadequate. 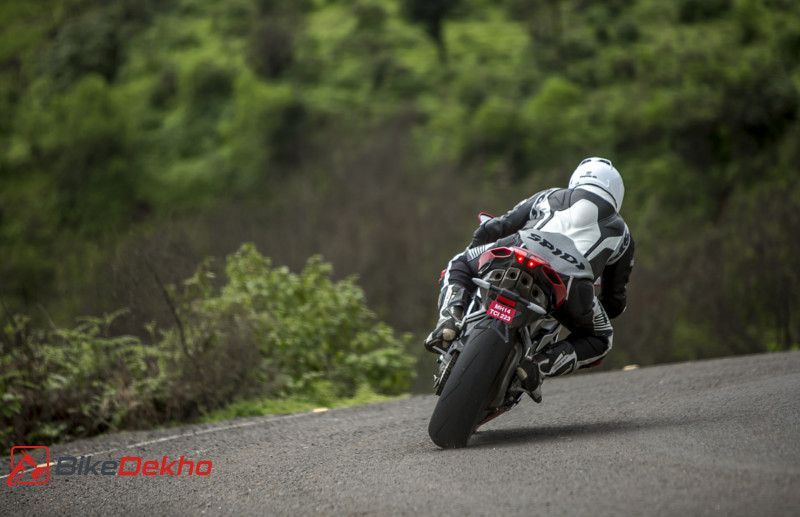 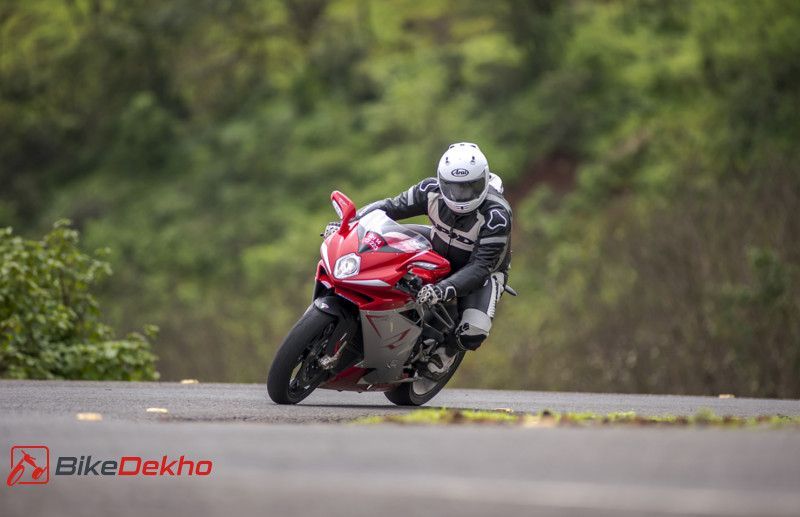 The MV Agusta F4R employs a tubular trellis frame and the handling of the bike is a delight. It tips into corners with enthusiasm and there is lot of feedback from the frame which helps you in increasing the cornering speed. The only downer to our time with the Italian beauty was the choppy throttle on the media bike which meant I was conscious while cornering as I didn’t have total control on the throttle. The massive 200-section Pirelli Diablo Supercorsa offered superb grip and played a vital role in the handling dynamics of the bike. 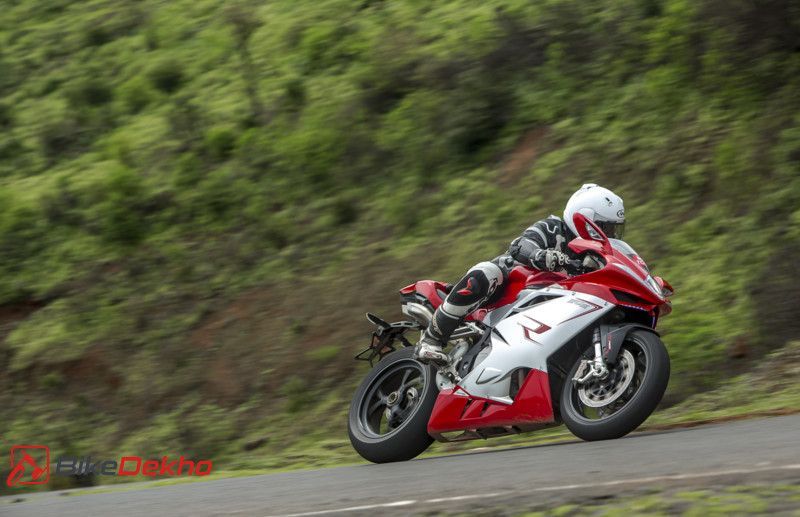 The MV Agusta F4R is a bike built for the track and on the unhindered racetrack only can one understand the true potential of the motorcycle. Riding the bike in the city also didn’t feel difficult but I must point out that the turning radius of the bike is large and you need a wide patch of road to negotiate u-turns. 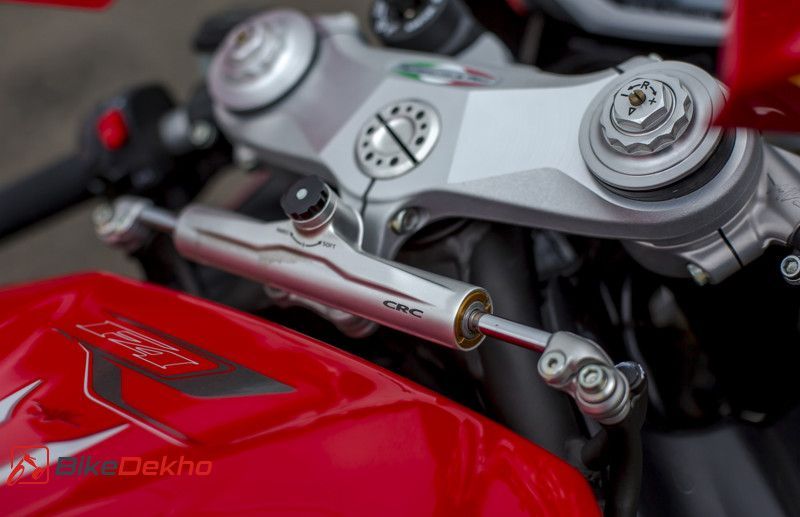 Being the R edition, it gets top drawer cycle parts like adjustable Marzocchi USD forks and an Ohlins sourced monoshock at the rear along with an adjustable steering damper. Ride quality of the bike is stiff by nature but it did roll over minor bumps at low speeds without complaining. Braking responsibilities are handled by monobloc Brembo disc brakes that offer stupendous retardation force which is essential given the performance on tap. Feedback through the levers and progression is also impressive. The ABS unit is the latest Bosch 9 Plus unit and it gets a special system that avoids the rear-wheel from lifting up under hard braking called RLM (Rear wheel Lift-up Mitigation). 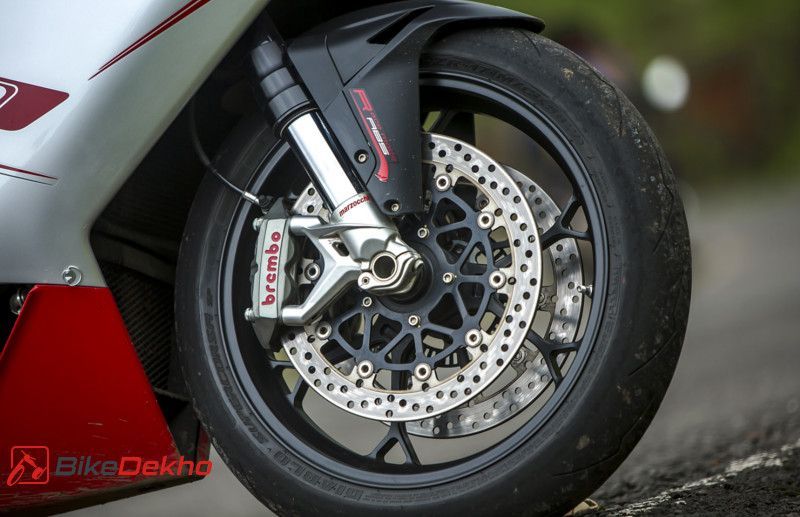 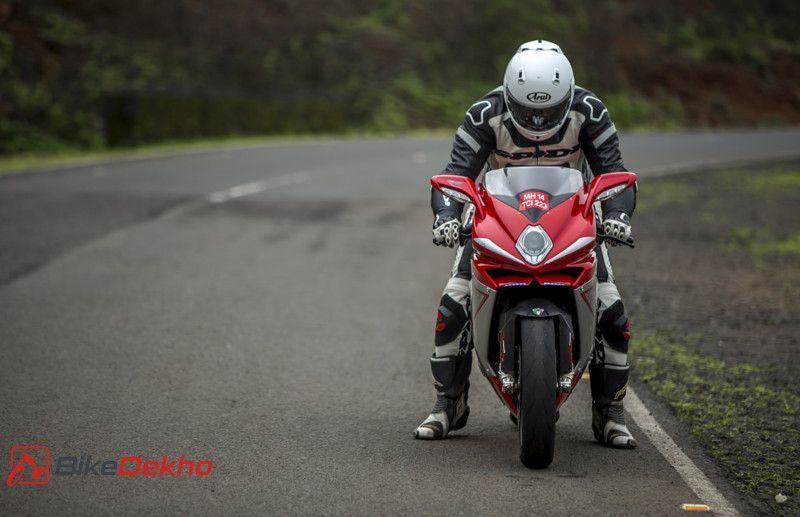 The MV Agusta F4R that we rode has been priced at Rs 29.09 lakh but you can’t purchase it as the bike isn’t on sale anymore surprisingly! You can get your hands on the base MV Agusta F4 which retails for Rs 26.87 lakh and gets cast alloy wheels and Sachs monoshock instead of Ohlins. Then there is the big daddy of all, the MV Agusta F4RR that has been priced at an eye-watering Rs 35.71 lakh (all prices are ex-showroom, Pune). From the above you can make out that the F4 range of bikes aren’t affordable even in premium motorcycle speak. The F4R isn’t suited for the road, is a demanding motorcycle to ride and will test the rider’s skillset and physical endurance.  The aggressive ergonomics and the scalding engine heat make it a pain to ride in city traffic, not to forget the large turning radius. The restricted dealership network means servicing will also be tedious, but MotoRoyale is expanding its dealer presence across India. 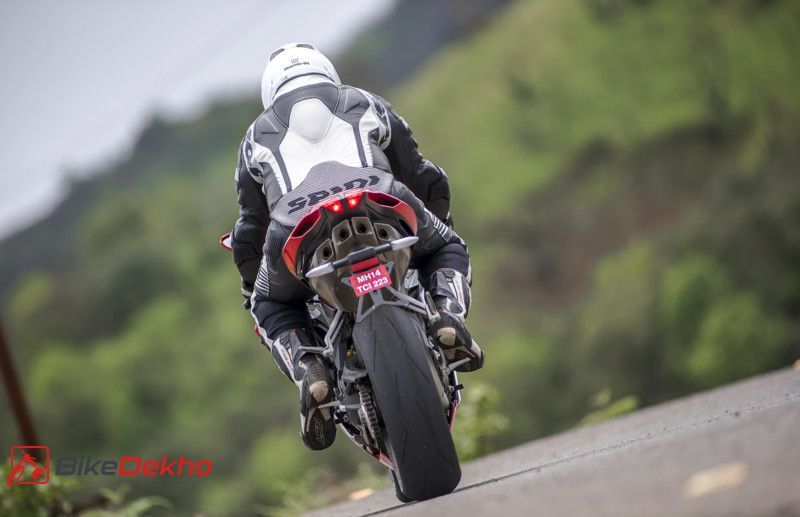 Even with respect to performance, the new Kawasaki Ninja ZX-10R, I feel, will be faster around the track while being over Rs 10 lakh cheaper. Yet, if I was privileged enough to own one, I would buy it within a heartbeat. The MV Agusta F4R is a bike that has oodles of character and that sensuous styling will make you stand and gawk at its splendid lines every time your eyes falls on it. The MV Agusta F4 is the true definition of Italian exotica while the mind boggling performance make it a combination that is difficult to resist. Riding the MV Agusta F4R in my opinion is a motorcycling emotion which every biker should strive to experience, though not on the streets but on a race track which is its home.