Here’s the price comparison of the updated Ciaz with the pre-facelift model.

Maruti has launched the Ciaz 2018 at Rs 8.19 lakh (ex-showroom Delhi). The Maruti Suzuki Ciaz was introduced in 2014 and after four years, the carmaker has now launched its mid-cycle facelift. It was shifted to Maruti’s Nexa retail chain last year and will continue to be sold from there. Here’s the price comparison of the updated Ciaz with the pre-facelift model.

The 2018 Ciaz gets a brand new 1.5-litre petrol engine, which has replaced the older 1.4-litre motor (93PS/130Nm). Its diesel engine, however, is the same Fiat-borrowed 1.3-litre motor with a manual transmission. Maruti hasn’t changed the transmission options with the updated sedan. What’s changed, however, is that the petrol motor too features Suzuki’s mild-hybrid tech now, as does the diesel engine.

The 2018 Maruti Suzuki Ciaz facelift gets an updated fascia with refreshed headlamps, which now feature auto LED projectors and daytime running LEDs. The new sleek grille is closely flanked by headlamps, making its front profile look wider than before. The bumper has also been redesigned to look sharper and gets LED fog lamps too – a first for a Maruti. It rides on new machine finished 16-inch alloy wheels shod with the same 195/55 cross-section tyres. The rear has also been revised and sports updated taillamps with LED elements and a refreshed bumper. It gets two new metallic colour shades: Premium Silver and Magma Gray. 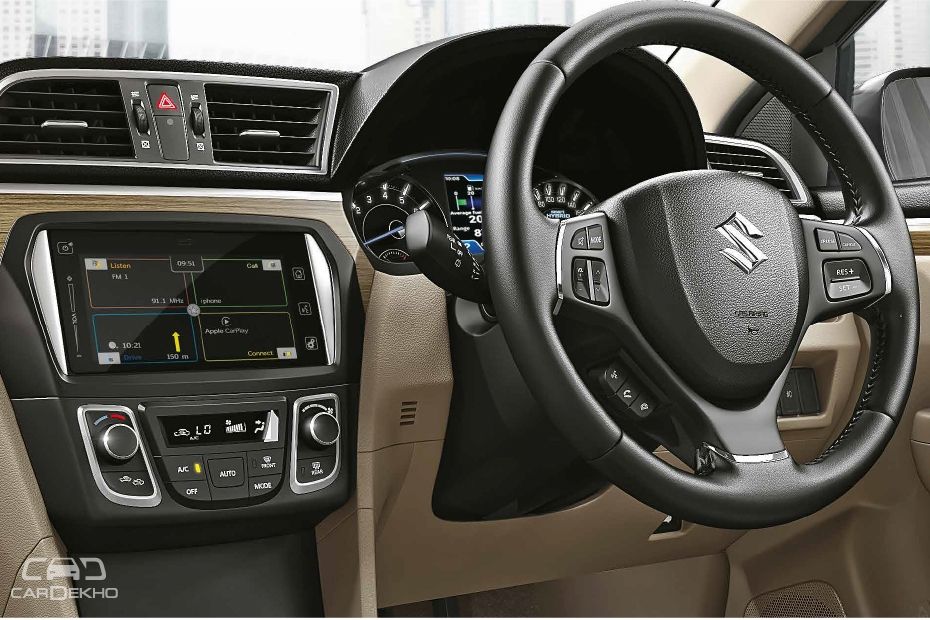 Being a facelift, the cabin has been carried over. The Ciaz continues to offer dual-tone black and beige theme inside. What’s new, however, is the instrument cluster with a 4.2-inch colour driver info display (exclusive to Ciaz petrol) and a lighter shade for the faux wood inlays. It carries forward the same 7-inch infotainment system with support for both Android Auto and Apple CarPlay. Additional features on the updated Ciaz include cruise control, adjustable rear headrests and rain sensing wipers. Earlier, the Ciaz used to get features such as auto climate control with rear AC vents, auto dimming IRVM, push-button engine start/stop, among others as standard.

The updated Ciaz packs new safety features besides the dual front airbags, ABS with EBD and ISOFIX child seat anchors. The 2018 model adds speed alert system (SAS) and seatbelt reminder (SBR) to its standard feature list. The SAS will warn the driver with a beep if the car exceeds 80kmph. Between 80kmph to 120kmph, the SAS will sound two beeps every minute as a warning signal. If the 2018 Ciaz is driven above 120kmph, there will be continuous beeps to warn the driver. Moreover, the petrol automatic variants get electronic stability program (ESP) as well.

The updated Ciaz renews its rivalry with sedans such as the Honda City, Hyundai Verna, Toyota Yaris, Volkswagen Vento and Skoda Rapid.