The supercar will most likely go up against Bugatti's 1,480bhp Chiron.

The Texas-based car tuner Hennessey Performance recently celebrated its 25th anniversary in style. It went out and broke the top speed record for an open-top production car in its Venom GT Spyder. Breaking the previous record of 408.8 km/h by the Bugatti Veyron Super Sport Vitesse, the GT attained an exhilarating top speed of 427.4 km/h.

Driven by Ford Performance Racing School director Brian Smith, the record was reportedly broken on 25 March at the Naval Air Station Lemoore in California. The news was confirmed by Jim Lau, technical director at the independent speed-testing firm, Racelogic. 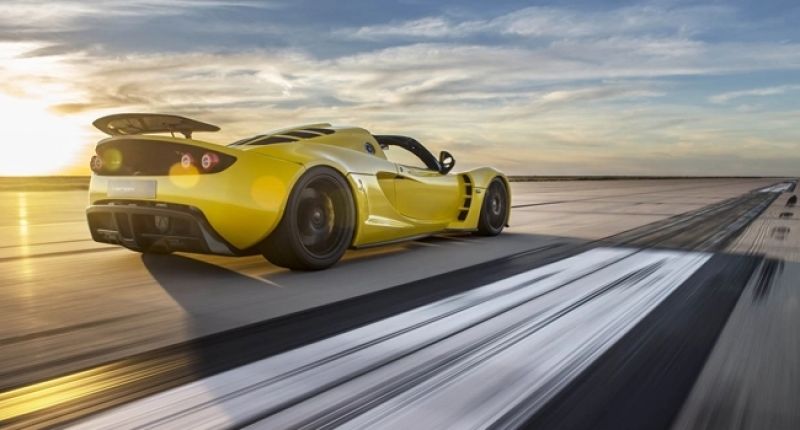 Hennessey Venom GT Spyder“2016 marks the 25th anniversary of Hennessey Performance and I thought that this would be a special way to celebrate 25 years of making fast cars faster.  I’ve wanted to test the top speed of our Venom GT Spyder, without the roof, ever since our coupe ran 435 km/h mph on the Space Shuttle landing runway at NASA’s Kennedy Space Center in 2014.  This was a great way to validate the technical excellence of our car which includes high-speed stability with an open roof,” said John Hennessey.

The Venom GT is based on a heavily modified Lotus Exige chassis and weighs less than 1250 kilograms. It’s powered by a twin-turbocharged 7.0- litre V-8 that cranks out a maximum 1,451 bhp and develops a menacing 1,745Nm of peak torque. The mill comes coupled to a Ricardo-sourced 6-speed manual transmission which sends power to the rear wheels that are wrapped in Michelin Pilot Super Sport tyres. This enables the GT to accelerate from 0-100 km/h in less than 2.4 seconds, while 0-321 km/h is achieved in less than 13 seconds.

A more potent successor of the Hennessey Venom GT is under works, and a rendering of the same has also been shown in the video. The supercar will most likely go up against Budatti’s 1,480bhp chirno.