DECCAN CHRONICLE
Published Sep 16, 2016, 8:44 pm IST
Updated Sep 30, 2016, 5:20 pm IST
Though, in terms of performance, this Honda can still take its competitors head-on, it lags behind in the electronic package department.

Litre-class is a special category that gives two-wheeler manufacturers a break from producing commuter and low-range bikes and also the chance to showcase their prowess and technological advancement. Among Japanese bike makers, Kawasaki leads the pack with its latest Ninja ZX-10R whereas Yamaha renewed its presence a few years ago with the new-generation R1. However, one of the motorcycle makers who has been losing its grip in this class is Honda. The last time it grabbed headlines was for its CBR1000RR Fireblade, which has started to show its age now. Though, in terms of performance, this Honda can still take its competitors head-on, it lags behind in the electronic package department. Honda knows this too, and all these years, it has been working on the next generation of the Fireblade, with rumours and details of the bike frequently making news. The updated version of the Honda bike was spotted with redesigned styling and it’s likely to get the much-needed electronic package.

Now pictures of what looks like the 2017 Honda CBR1000RR Fireblade has been posted on the internet while undergoing photo shoot on a race track. The bike seems to have got revises styling as the front section is much sharper. It sports new headlamps that are reminiscent of the recently launched Honda CBR250RR. The rear section of the bike has been tweaked a bit and so have the panels. Other visual additions include multi-spoke alloy wheels and a new exhaust muffler that is larger than the older bike. But it’s not all good news. It seems that the above bike is an update of the current-generation Honda CBR1000RR Fireblade and not an all-new motorcycle. The frame and the swingarm looks carried forward from the existing motorcycle and so does the engine casings suggesting that it’s the same powerplant. 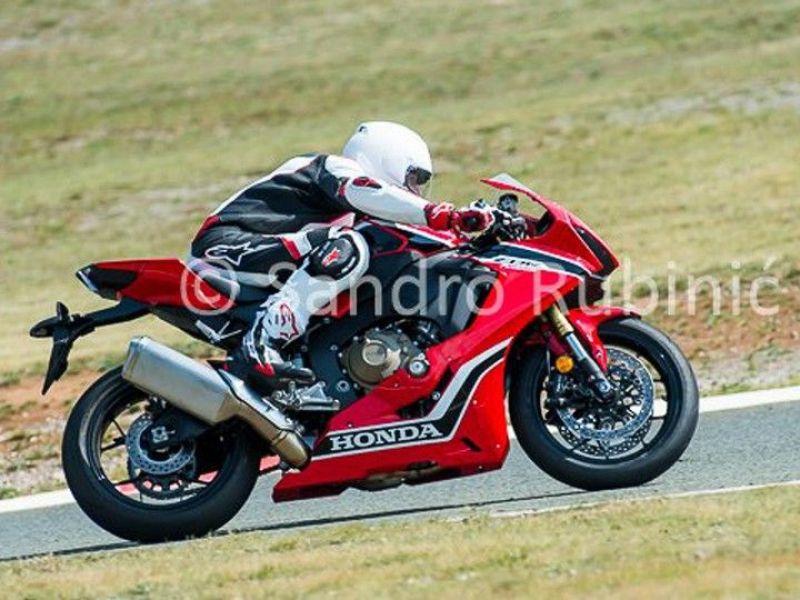 What we think is that the bike in the above picture is an updated Honda CBR100RR Fireblade and not an all-new motorcycle. We can expect the updated Fireblade to get electronic package so that it can put up a fight with the new breed of motorcycles. Expect traction control, quickshifter, various ride modes and more such electronic wizardry. No details on the engine specifications but we can expect a minor bump in power output. The engine though would be much cleaner and greener to comply with Euro4 emission norms. We can expect the updated Honda CBR1000RR Fireblade to make its debut at the 2016 EICMA motorcycle show in November and a possible global launch by early 2017.