Dominated by the Alto 800 and accompanied by the Hyundai Eon and the Renault Kwid, the baby Datsun is ready to take a slice from the largest selling.

The Datsun redi-GO is trying to carve its way in the most popular automotive segment of the country. Dominated by the Alto 800 and accompanied by the Hyundai Eon and the Renault Kwid, the baby Datsun is ready to take a slice from the largest selling pie of the country. Been in the country for almost 16 years, the Alto 800 has over a decade of experience and the nation’s trust. Will the redi-GO be able to shake the king, or even rattle the likes of the Kwid and the Eon? Let’s find out.

Clearly, the most powerful car on paper in the space is the Hyundai Eon and the least powerful car is the Alto 800. But when it comes to the drive, the Alto feels much more smoother that its rivals, especially the new arrivals in the segment -- the Kwid and the redi-GO. Now, coming to the most important aspect of this segment, the fuel efficiency. The redi-GO and Kwid take the lead here with a claimed fuel efficiency of 25.17kmpl, followed by the Alto (24.7kmpl) and then the Eon (21.1kmpl).

When it comes to features, the Kwid dominates the segment with its seven-inch touchscreen infotainment system with navigation. It also has a fully digital instrument cluster which is one of the highlights of the car. The Datsun redi-GO does offer additional features over the other cars like DRLs, mileage display and distance-to-empty display, but not much. All other cars offer similar features in terms of audio system, safety, upholstery, instrument cluster display and center console features.

The Kwid dominates the dimensions and space aspect in the segment. It is the longest and widest car within the segment and also has the biggest boot (300 litres). In terms of height, the redi-GO, courtesy its tall boy design, is the tallest car and hence, offers the best headroom for tall passengers. The Alto and the Eon offer almost similar room inside the cabin. 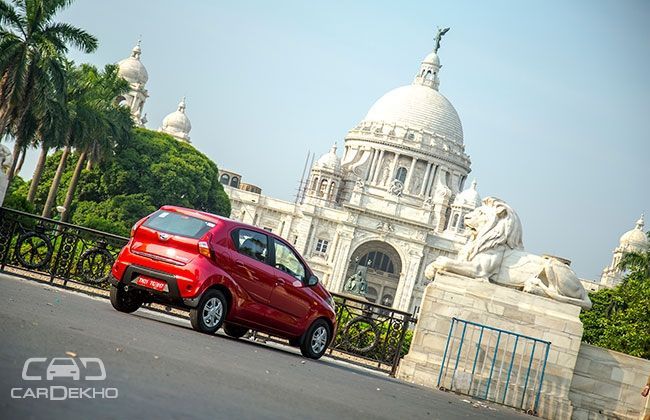 Is the redi-GO any good? Yes,the redi-GO brings a fresh design language in an age-old segment. It has a decent list of features and drives well too. The Alto was recently updated, but still looks very much like its older self. The Eon desperately needs an upgrade while the Kwid has made its mark in the market. Amid these models, the redi-GO appears to be a good new option for buyers to choose from. With prices starting from Rs 2.4 lakh and going upto Rs 3.3 lakh (ex-showroom Delhi), it is a worthy entrant in the segment. If Datsun is able to win customers' trust and improve its image in India, the redi-GO may just be seen in higher numbers on our roads.

Datsun redi-GO Variants : Know Which One To Pick