Before we start of, let us clarify that we are indeed in our senses. On one hand we have a premium luxury saloon, and, on the other hand, we have a rugged four-wheel-drive SUV that has been resurrected with some premium touches. The  Ford Endeavour and the  Skoda Superb might seem like cars from separate planets, but, they are similar enough for a buyer shelling out over Rs 30 lakh. 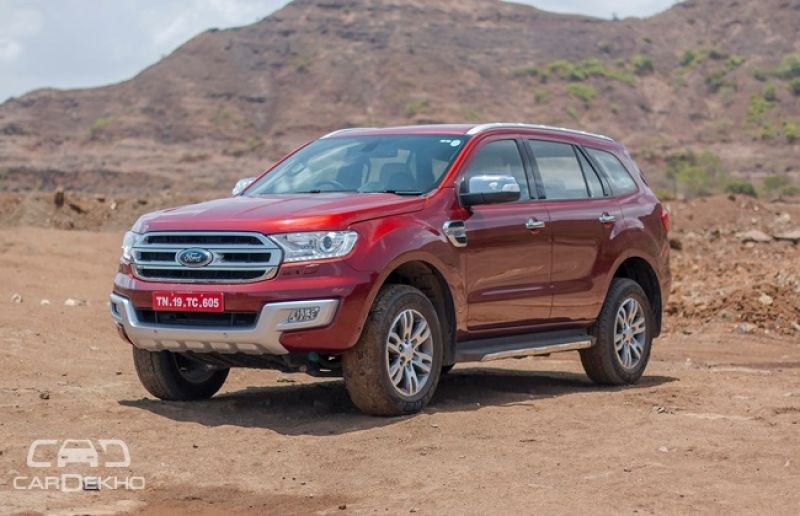 Design on these two are as different as a trekking boot and walking shoes. The Endeavour is based on the Ford Ranger pick-up truck and it looks like it can trample you if you aren't too kind to it. Saying that the Endeavour is massive, would be an understatement. I also like how Ford has refused to go soft on the design. Most of the Endeavour's rivals have adopted tamer designs to blend into the urban environment, but not this one. It is something that would have absolutely no problem showing up in a pair of denims at a ball hosted by her majesty. 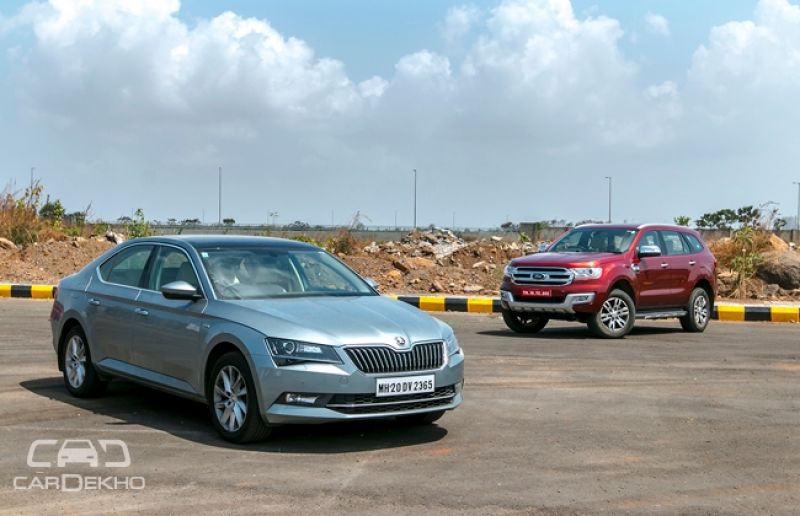 The Endeavour screams muscle from every angle. Be it the slab of chrome on the front, the projector headlamps, the alloy wheels or the wheel arches - all come in a generous double XL size. It is a proper mammoth that manages to dwarf the Superb, which is a massive car in itself! The Ford, then, is all about presence. All about announcing your arrival, all about saying 'LOOK AT ME'! 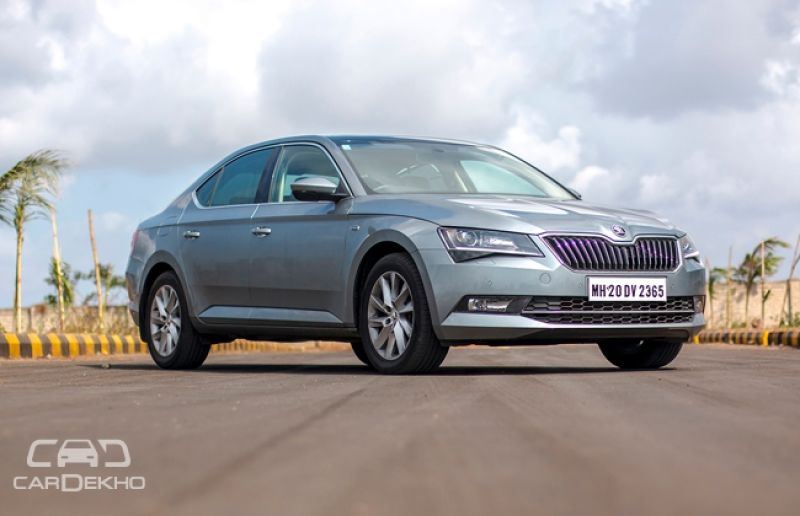 The Superb is the polar opposite. It won't mind if you didn't look and at the very same ball hosted by the queen, you'd find it rubbing shoulders with the A-listers. There's an air of class and sophistication about the Skoda that the Ford just cannot pull off. The design is minimal, with razor sharp character lines that highlight the generous length of the car. 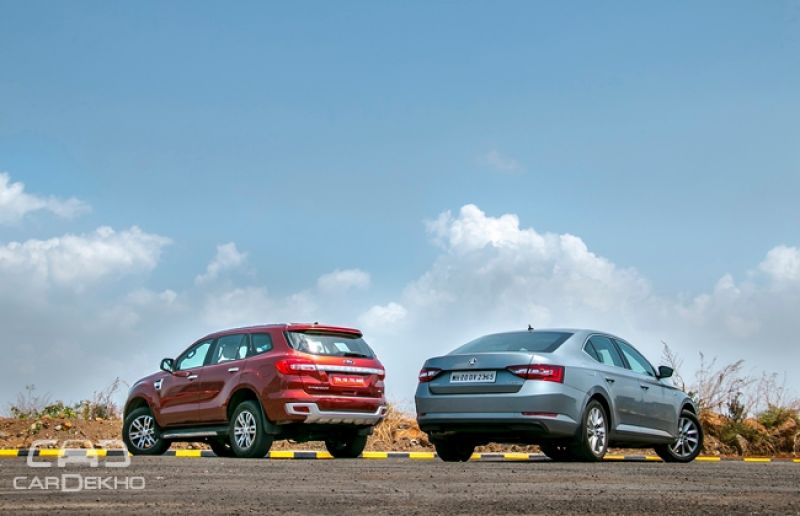 We love how everything on the Superb looks like it has been styled using a katana. The chiseled chin, the daytime running lamp setup, the tail-section -- all look like the work of a certain Samurai Jack. The Superb is wider than the Endeavour (yes, you read that right!)  and yet manages to look slender and dapper. The proportions on the Skoda are spot on for a premium saloon.

The difference in design on the inside is equally different. For starters, one had to climb inside the Endeavour and sit down into the Superb. Neither of them are easily accessible to someone with knackered knees, but we'd pick the Superb for ease of getting in and out. 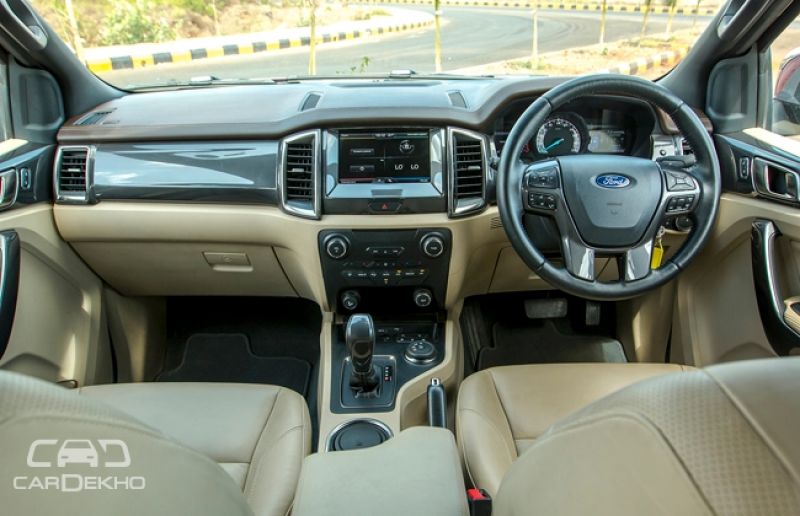 Once inside, you'd notice that the Endeavour's cockpit looks utilitarian. That said, it is packed with possibly everything you'd ever need! You get two screens in the instrument cluster that lets you scour through audio, calls, distance to empty and a lot more by using the buttons on the steering wheel, of which there are 22! There's a touchscreen infotainment system, dual-zone climate control, electrically adjustable seats, a sunroof and active noise cancellation on the feature list as well. While all of that is jolly good, the quality of plastics look one notch lower than the Superb. In isolation, they seem really nice, be it the chocolate brown leather on top of the dash, the leather on the seats or even the lining on the roof for that matter. However, get inside the Superb immediately after getting out of the Endeavour and you'll realise that the devil lies in the detail. 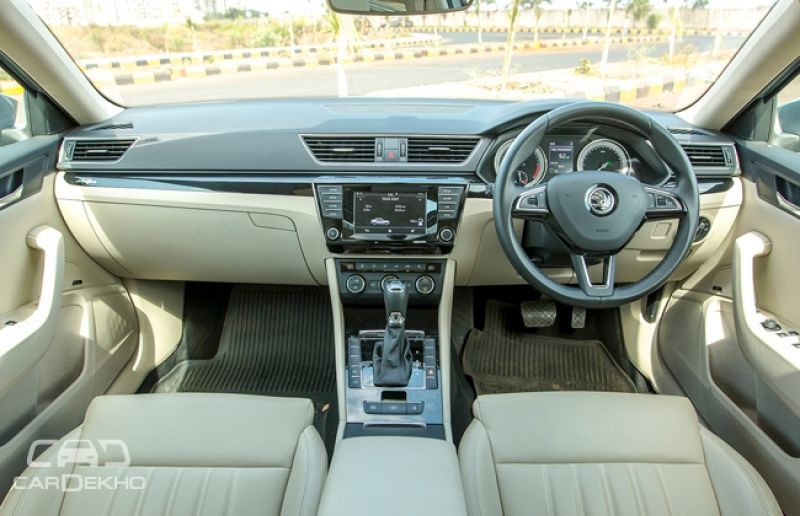 In the Skoda, little bits like how the gear lever feels while slotting into drive, the knurled finish on the temperature-control knobs, the sauve graphics on the infotainment and the multi-information display, all do their bit in uplifting the overall experience. The Superb's interiors are bathed in leather just like the Endeavour. But, everything looks and feels that one bit better. The design is cleaner, the layout is user friendly and all the buttons and switches are just where you'd want them to be. There's a plethora of gizmos to play around with as well. You get a touchscreen audio system with MirrorLink that is mated to a lovely Canton audio system. This particular 12-speaker music system is amongst the best we've heard in a long, long time! You also get three-zone climate control, electronically adjustable driver and passenger seat, the aptly called 'boss button', ventilated seats and more. 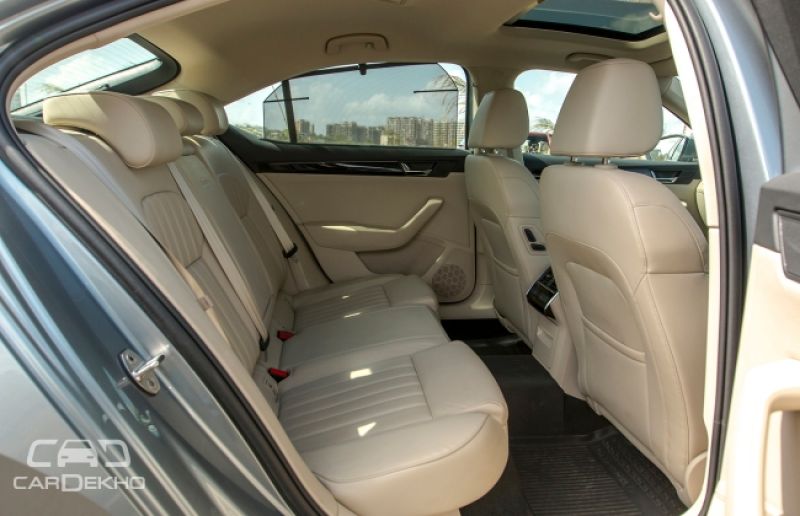 We have to say, there's no specific 'seat to be in' when it comes to the Superb. The front two get ventilation which we think is an absolute boon in our conditions, whereas the rear bench gets acres of legroom. What do we miss in the interiors? Practically nothing. The Superb's cabin can put most cars a class above it to shame, be it in terms of equipment on offer, quality or space. 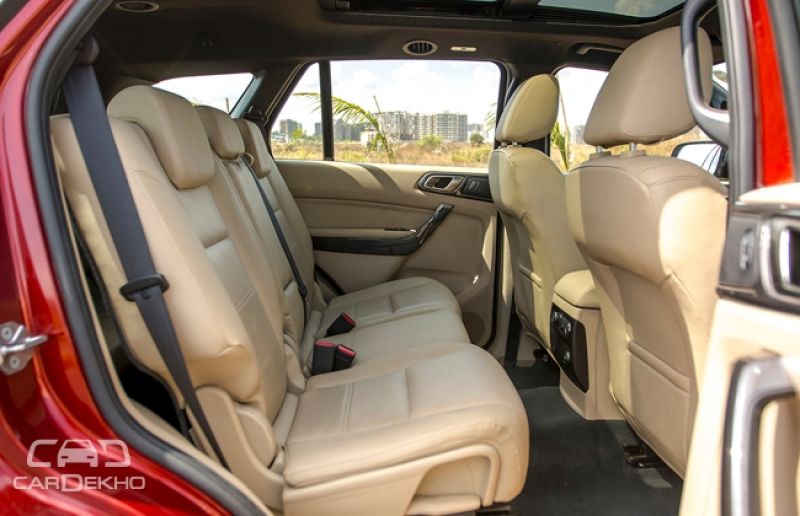 Unlike the Skoda, the Ford can seat seven. But, it's the driver's seat that you should be fighting for. The commanding view from the front row is unmatched, and we have to say it feels pretty nice towering over pesky autorickshaws. The rear seats are adequately comfortable and can house three with ease. The third row can house adults as well, but that isn't something we recommend for longer trips.

To sum up, the Superb's interior is nothing short of a first-class business lounge that the suited entrepreneur is used to. The Endeavour's, on the other hand, is made for a bunch of friends that find every possible excuse to head out on a road trip.

On paper, the Superb is evidently down on power. The 3.2-litre engine on the Ford produces 200PS of power and a massive 470Nm of torque that easily overshadows the output of the 2.0-litre engine of the Skoda, that produces 177PS and 350Nm. However, on tarmac, the Superb's lighter weight helps it run rings around the Endeavour. 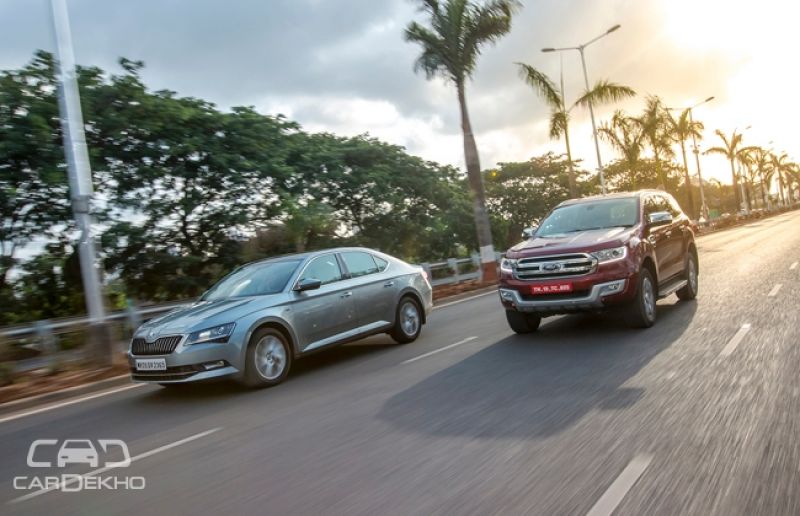 The 6-speed dual-clutch gearbox on the Superb is eons better than the torque converter unit on the Endeavour. The shifts are lightning quick and you'd barely notice an upshift or a downshift unless you're stomping on the accelerator. As a bonus, you also get paddle shifters to play with. Power delivery is extremely linear; the Superb will waft you away in comfort. There's no sense of urgency, unless you switch the Drive Mode to 'Sport' that is. In Sport, the 2.0TDi is put through the grind, the gearbox holds onto the revs longer and all you need is a swift dab of the throttle to overtake anything. 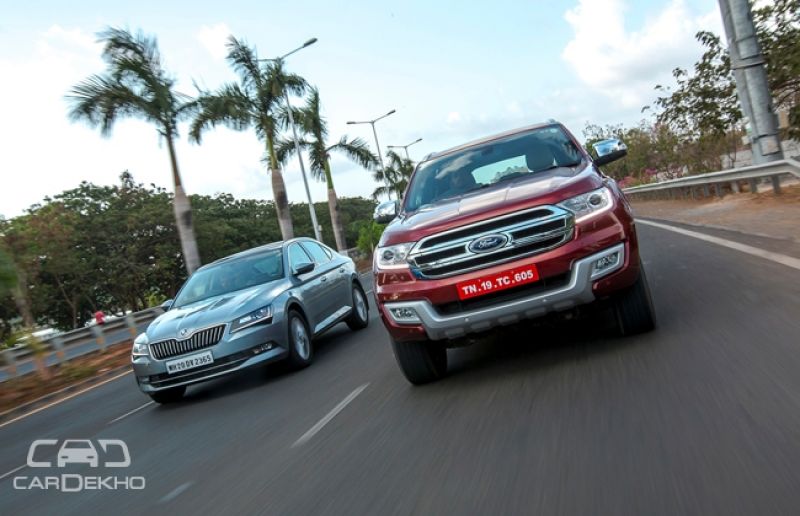 Speaking of overtaking, that isn't  a problem with the Endeavour either. More often than not, you need a flick of the headlamp switch to pass what's in front of you and not a push on the A pedal. The Ford has so much road presence, that everyone (and I mean EVERYONE) gives way. But, when you do let the engine do the talking, it's the gearbox that stammers. It feels confused for a split second before obeying your command. That said, the engine-gearbox combo can't be termed outright sluggish, but, a slightly quicker response would've made it so much more drivable.

The Endeavour obviously excels in off-road drivability. The 225mm of ground clearance is more than adequate to pummel through the nastiest of potholes and the worst of roads. If you have a quaint little farmhouse on the outskirts you visit over the weekend, the Endeavour will make life a whole lot easier. It also gets a clever terrain response system that sets the car up to tackle varying terrain. But, we do wish there was a manual gearbox on offer with the 3.2-litre motor -- the off-road enthusiast does miss this! 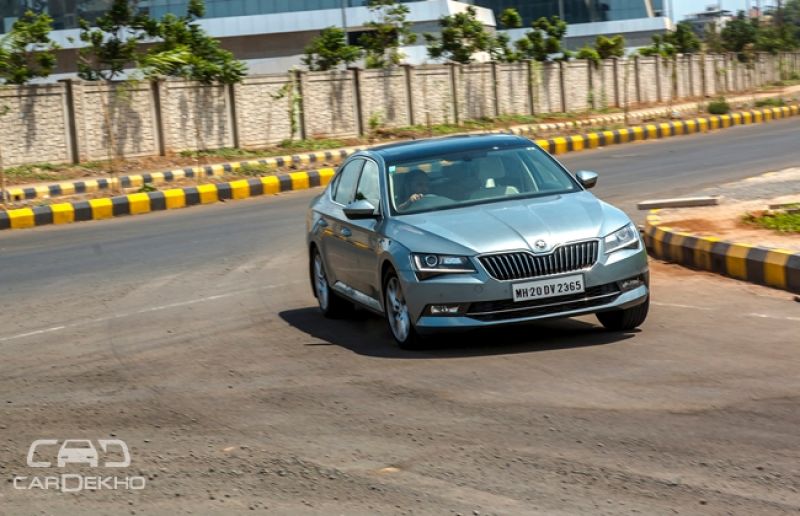 There's no other way of saying this. The ride quality on the Superb is...umm.. SUPERB! The suspension barely lets anything upset the occupants. As a daily drive, it's the Skoda that feels more relaxing and planted. The Endeavour, on the other hand, will gobble up practically anything our roads will ever throw at it. But the ride is slightly bouncy, especially in the second row. 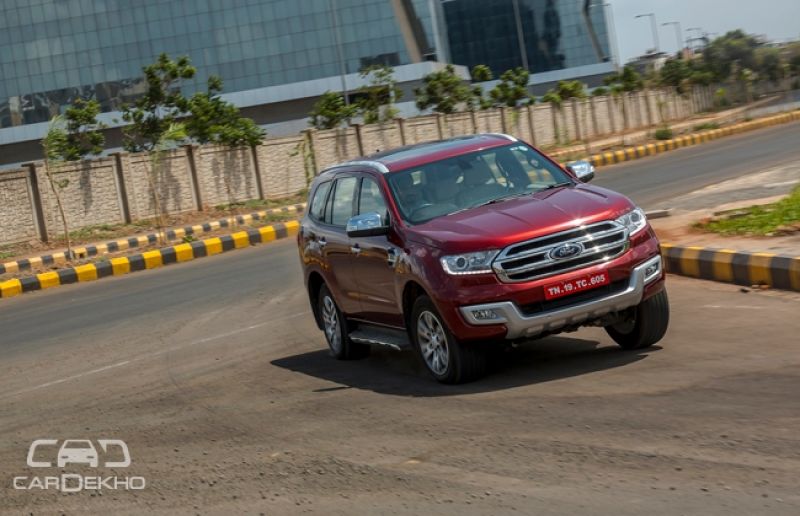 The low-slung sedan is obviously better at tackling the bends too. The steering feels nice and light (in fact, it felt as light as my VW Polo!) and makes it really easy to maneuver the stretched sedan around the city. The Endeavour has a fair bit of body roll through the bends and the steering isn't as light as the Superb. At higher speeds, both cars feel confident and relaxed. You can do triple-digit speeds all day long and these two wouldn't mind it one bit.

In terms of stopping power, both cars get disc brakes all round. Stopping power is more than adequate in both. However, the Endeavour dips its nose down quite a bit under heavy braking whereas the Superb maintains its poise.

Picking between the two hasn't been as easy as we thought it would be. It all boils down to your personality. If you like being in the two-piece suit all day long and don't mind working over the weekend, the Superb suits you best. However, if you usually ditch formals for a pair of shorts and head out exploring over the weekend, it's the Endeavour that fits the bill better. Needless to mention, it is the go-to option if you need a seven-seater for the budget. 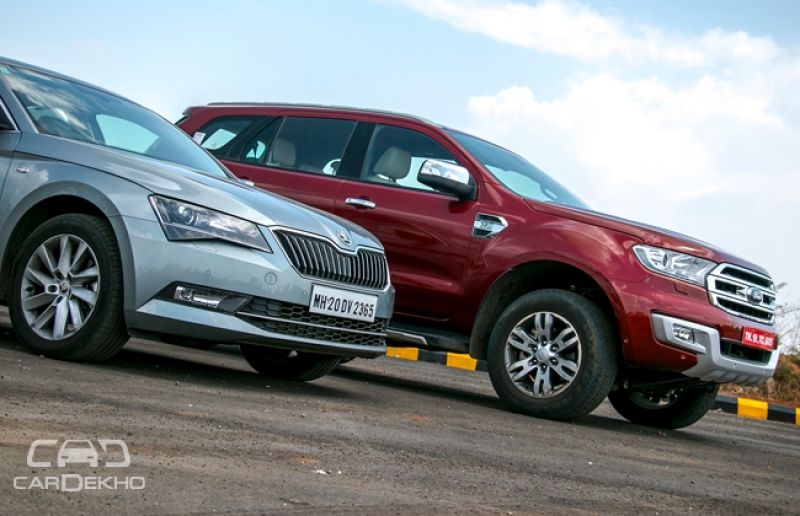