To find out, let's compare its specs with that of the well-established Ford Endeavour.

With the increasing popularity of SUVs, automakers are trying to gain more market share by introducing new cars into the segment. Skoda also recently showcased its new SUV, the Kodiaq, in Berlin; and due to its sleek design and classy-looking interiors, it has already generated a lot of interest. The SUV is likely to be launched in India next year and will fight head-to-head with the Ford Endeavour. Is the Kodiaq worth the wait To find out, let's compare its specs with that of the well-established Ford Endeavour. 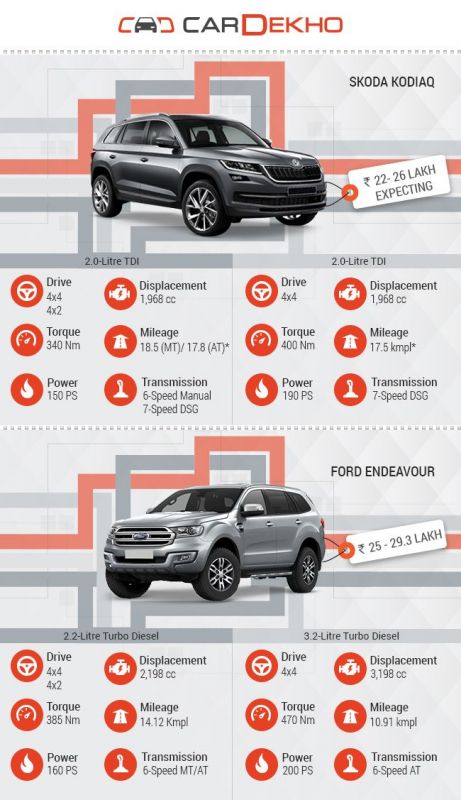 To be honest, both of these cars are quite similar when it comes to mechanical outputs. But when it comes to the engines themselves, they could not be further apart. While the Endeavour uses two different diesel engines (2.2 and 3.3-litre), Kodiaq has one diesel engine in two different tunes (2.0-litre). The power outputs from the Kodiaq's engines (150PS/190PS) are 10PS lower than the Ford SUV's (160PS/200PS) and the torque outputs are considerably lower as well; but the Kodiaq is a lot lighter than the Endeavour and so might turn out to be the better performer. Also, since the Skoda Stands closer to the ground (188mm as compared to Endeavour's 225mm), it might be the better handling SUV of the two. This will surely be confirmed as soon as we lay our hands on both of these SUVs for a head-to-head.

Skoda might also launch the 2.0-litre turbocharged petrol motor in India since it is part of its global offerings. The reason we say this is that this very motor, which produces 180PS of power and 320Nm of torque in the SUV, might also power the upcoming Octavia vRS. So the likelihood of the engine making its way into the Kodiaq is quite high.

So, what we see here is a contrast of personalities. While the Endeavour is meant to conquer mountains and drive through rivers, the Kodiaq is subtle and aims at a comfortable city and highway ride, while being off-road capable. 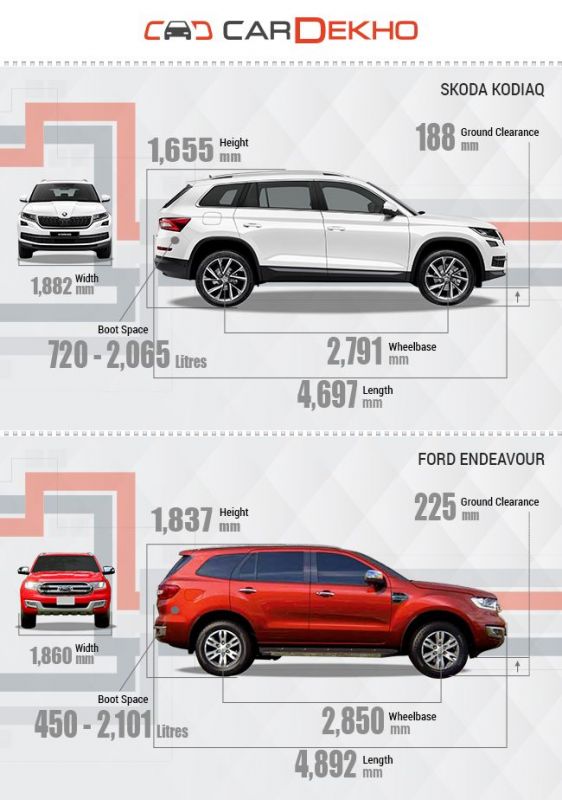 SUVs are meant to be spacious. Both the cars in the comparison are seven-seaters and have adequate space to seat the said capacity. But the Endeavour is longer in length, has a longer wheelbase and houses a smaller boot, all of which translates into more space in the cabin. But, since the Skoda is wider, seating three might be a tad bit easier. Speaking of boot space, Kodiaq has the largest in the segment (as claimed by Skoda) at 720 litres, which can be extended to 2,065 litres. Endeavour, on the other hand, has 450 litres in the boot, which can be pushed to 2,101 litres by folding the seats. 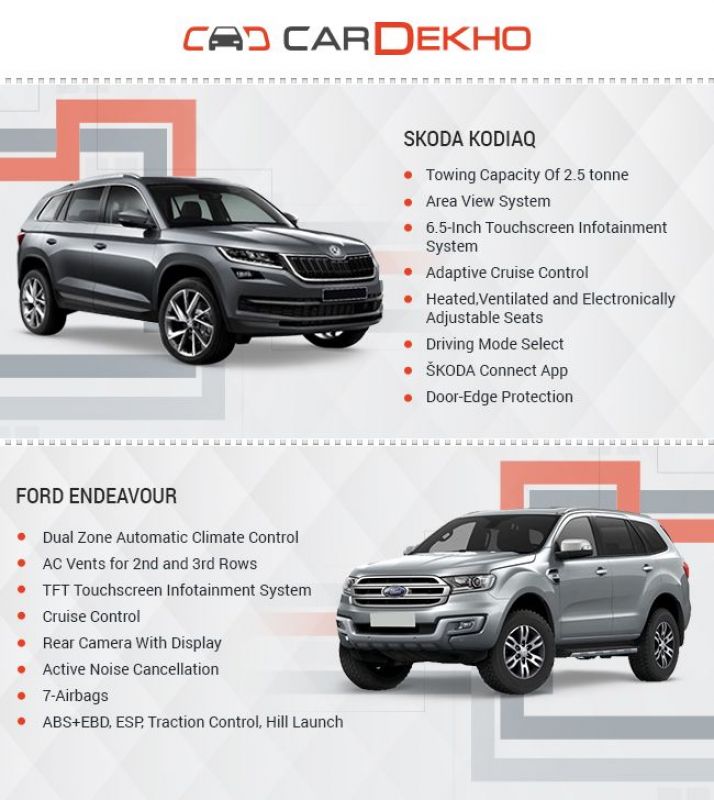 Again, the contrast in the personalities of the two SUVs is evident here. Both the vehicles come loaded with features, but for different purposes. While the terrain management system in the Endeavour is a part of the package, the off-road mode in the Kodiaq comes as an optional system for the all-wheel-drive versions, along with Driving Mode Select. Both of these SUVs have plush interiors and a touchscreen infotainment system with navigation, in an identical dashboard layout. However, the Endeavour has a chunky steering wheel and a more commanding cockpit view than the Kodiaq with its elegant three-spoke wheel. Both the SUVs come loaded with safety features and gizmos to keep you pitched straight on the – and off-the road.