The French carmaker also managed to stay in the headlines last month with the launch of the 1.0-litre version of its hot-selling Kwid hatchback.

With the introduction of new models and heavy discounts from automakers last month, the passenger car market grew by 15 per cent. More than 2.53 lakh units of cars were sold in India in the month of August. Maruti Suzuki India Limited continued to top the sales charts by selling 1,19,931 units of cars, and registered a 12.2 per cent growth.

As expected, the country’s largest carmaker, Maruti Suzuki India Limited led the pack last month with 1,19,931 units shipped to customers, at a 12.2 percent growth. Its small car market though, continued to be hampered by its ageing portfolio and the challenge from Renault that sold almost 13,000 units in August, registering a remarkable 200 per cent-plus growth. The French carmaker also managed to stay in the headlines last month with the launch of the 1.0-litre version of its hot-selling Kwid hatchback.

Among other auto majors was India’s second-largest carmaker, Hyundai Motor India Limited. It sold 43,201 units in August with a steady 6.2 per cent growth from last year. With the recent launch of the fifth-generation Elantra executive sedan, it is hoping to carry the same momentum into the forthcoming festive season.

Domestic carmaker Mahindra & Mahindra will also be hoping for similar movement in the coming days as its sales also rocketed up by 29 per cent to 18,246 units. Tata Motors too continued its upward trajectory from the past few months on the back of the Tiago hatchback. It registered a healthy 16 percent growth by selling 13,002 units.

Other carmakers, including Nissan, Ford, Toyota and Volkswagen, were all in the green last month as Honda Cars India remained the only manufacturer to experience negative growth. With sales dipping under the 14,000-mark, the Japanese carmaker fell by almost 11 per cent.

Overall, financial experts are predicting the same trend to continue in the coming months ahead of the festive season; with the current fiscal heading towards a double-digit growth for the first time in five years. Up next soon is the list for the top-selling passenger cars from August; stay tuned! 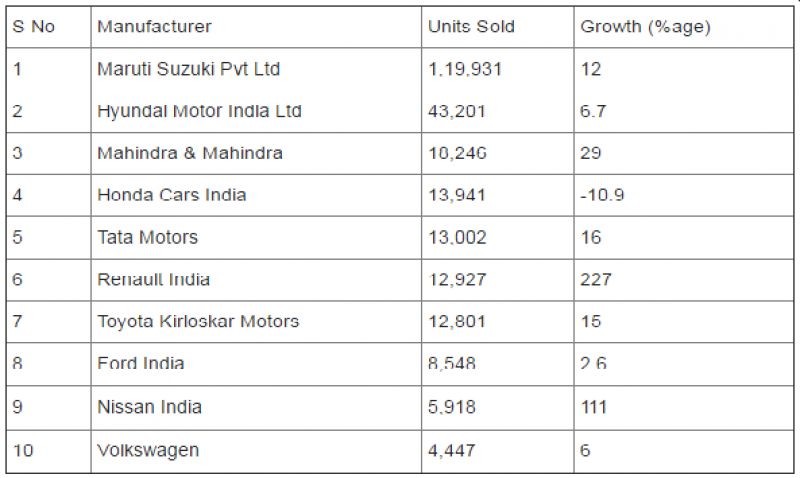