CV manufacturers in the country have been struggling in selling their products for the last three months.

CV manufacturers in the country have been struggling in selling their products for the last three months. Factors including GST bill and BS-IV implications were noticed as the main reasons behind the downfall. But Diwali and Dhanteras falling in October may have just ended the worries of the CV manufacturers in India.

Many M&HCV manufacturers in India have surpassed their own October 2015 sales records, and it seems that the commercial vehicles industry is back on the track. We look at how the major CV players faired in the month of October 2016.

Tata Motors has been leading the M&HCV segment in India for consecutive years. The amount of commercial vehicles that Tata sold in October 2016 surpassed its closest competition by over 10,000 vehicles. The automobile giant from India, famous for Tata 407, sold 4,050 more vehicles in October 2016, in comparison to what it had sold in the same month in 2015. Tata has witnessed a growth of 15.51 per cent. 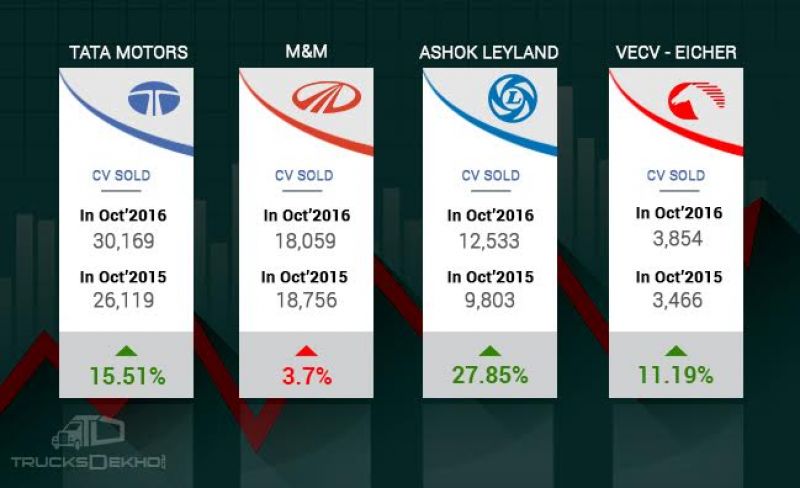 Mahindra has come a long way in the CV industry and is considered as Tata’s closest competitor. But the current poor show will not only question the reliability of its products, but also help other CV brands rejoice for a while.

Experts in the industry agree that this home grown M&HCV automaker is turning the CV industry in India. It has become famous for its aggressive approach in the media. In fact, the CV giant has managed to become the talk of the town every second day, and this newly acquired ability has certainly helped Ashok Leyland make some serious cash.

The collaboration between Eicher and Volvo seems to be working wonders for both. The joint venture has managed to file 11.19 per cent growth in number of sales. The duo had sold 3,466 commercial vehicles in October 2015, whereas managed to sell 3,854 in 2016.

CV manufacturers will have to move with caution as vehicle sales during Diwali and Dhanteras are generally higher than normal, and may not denote the complete revival of the industry. Moreover, with GST and BS-IV lined up, one can expect a lot of sharp turns in the future for CV industry.