Yangon:  With a flourish of his pencil, cartoonist Maung Maung Aung skewers a pampered politician in a sketch, an image that just a few years ago would have been unthinkable.

The illustrator is among an increasingly brazen band of satirists that has emerged in a nation where recent elections tipped the balance of power from authoritarian military rulers for the first time in generations.

"We are very happy for you that you have not been beaten and abused. We only hope that you won't cause trouble for others," reads a speech bubble above the raggedly dressed father, mother and small child.

The image takes aim at inequalities faced by many ordinary people in Myanmar, despite reforms that have rippled through the long-cloistered nation.

Those changes led to a landmark victory for Aung San Suu Kyi and her pro-democracy party in November, boosting hopes of a prosperous future -- and a more open press.

"Cartoons need freedom. The more freedom there is, the more a cartoon is able to say and be creative so they can carry more meaning," said 60-year-old Maung Maung Aung, perched behind his drawing board in a Yangon studio cluttered with illustrations.

In four decades as a cartoonist he has suffered poverty, fear and censorship, working with little margin for error under a junta that jailed dissenters and ripped anything deemed critical from newspaper pages.

That drove him to seek refuge in the United States, where he worked as a painter at a fine arts studio in Florida.

But he returned to his homeland in 2012 soon after a quasi-civilian government replaced outright army rule.

Now cartoons are enjoying a renaissance, tackling a range of subjects from the country's economic woes to foreign policy and the elections peppering newspapers and websites daily.

And Myanmar's caricaturists are sharpening their pencils for the next test how to satirise the revered Suu Kyi as her party prepares to take over government in late March.

Suu Kyi is lionised in Myanmar, where the peaceful resistance to army rule was for years depicted as a tussle between the frail and graceful Nobel laureate and brutish generals.

Maung Maung Aung said illustrators should not shirk from depicting "The Lady", as Suu Kyi is known. "Cartoonists should not be biased, they should point out the faults of any government," he said.

Suu Kyi faces myriad challenges, including restoring peace in war-torn ethnic borderlands, rebooting the economy left in tatters by the junta and tackling rampant corruption all easy fodder for the country's satirists.

"She (Suu Kyi) has been a sacrosanct subject, but it'll come. We can't have a really free media if one figure is held 'out of bounds'," Yangon-based Myanmar analyst Khin Zaw Win, said. 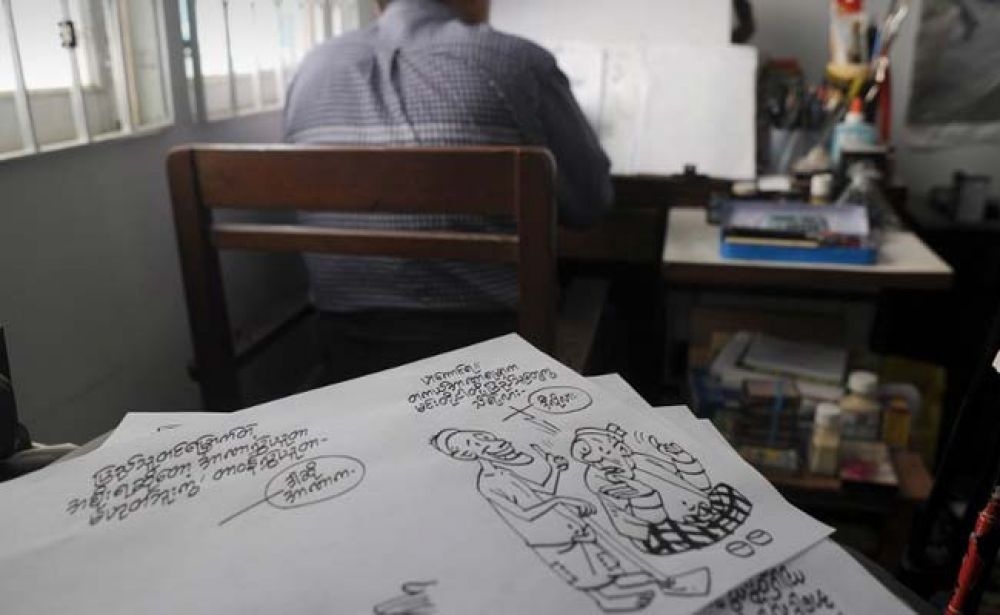 Now cartoons are enjoying a renaissance, tackling a range of subjects - from the country's economic woes to foreign policy and the elections -peppering newspapers and websites daily. (Photo: AFP)

"She will not and should not be spared." But that might be easier said than done. Phoe Kyaw, a cartoonist from Suu Kyi's Kawhmu constituency, said he would feel free to criticise her.

"She will understand," he said. "On the other hand, I believe in her as our national leader, that's why I won't draw a cartoon to insult her personally."

And though the country's reforms have brought an end to draconian pre-publication censorship, restrictions on expression remain with several activists detained for Facebook posts satirising the army in recent months.

The private daily newspaper Myanmar Times issued a prominent apology in March for a cartoon lampooning the army's battles with rebels in the far north.

In the offending cartoon a man reading the newspaper tells a woman that the military are "seizing the mountains".

"It's not enough to seize the rice fields," the woman replies in a speech bubble, a reference to persistent accusations of landgrabbing by the armed forces, particularly under junta rule.

The paper conceded the image was "not in good taste" and no action was taken against it.

A Hundred Years Of Satire

At a recent cartoon exhibition in Yangon, crowds of hundreds chuckled at illustrations commenting on everything from the election to controversy over a Chinese-backed copper mine.

The cartoon festival was held in honour of Ba Gyan, considered to be the father of Myanmar cartoons, who started his illustrious career in 1915, mocking the British colonial authorities and later the early independence government.

But that era of vibrant political debate was snuffed out by the military, which seized power in 1962.

With their open ridicule of authority figures, Ba Gyan's decades old cartoons are still possess the power to shock in their boldness.

Myanmar's first generation of cartoonists "had the chance to write openly about national freedom and revolution under the colonialists," said Maung Maung Aung, lamenting the restrictions faced by a second wave of cartoonists under military rule.

"If we could have a real democratic age, then our freedom would be assured," he said.