Before 'Rockstar', people called out to me as ‘Oye Jab We Met’: Imtiaz Ali

Budding filmmakers and writers got a chance to interact with the director, Imtiaz Ali at an event in Mumbai.

Budding filmmakers and writers got a chance to interact with Jab We Met director, Imtiaz Ali at Whistling Woods on Saturday afternoon. Irshad Kamil, who was also present at the master-class organised by Humara Movie, shared some lyrics that he had originally written for a few songs of the film.

The master-class was Imtiaz’s first for Jab We Met. He says, “These master-classes may have become common now, but for me, it started with Rockstar. It was a remarkable session. Although it lasted for three hours, I feel like I have only skimmed the surface of what I wanted to say or what the film was trying to tell me. I enjoyed watching the film and I could watch it as a common viewer.”

The Q&A round was open to audiences, and Imtiaz was met with a barrage of questions. There were a few that remained with him. He says, “A girl asked me if after Jab We Met I had a mental note about the things I should or shouldn’t do. Vinay Mishra (co-founder of Humara Movie) asked me a question about why I brush through emotional sequences in my movies and if I am emotionally stunted.” But Imtiaz has an explanation for this.

He says, “It’s very rare for people to talk about their feelings. I find it extremely boring in films. It’s pathetic if you show emotional an scene for a long time on screen. I have tried to avoid that in my films. I feel that even in life, I would like to avoid situations like that. I believe that if you want to convey something genuine, you must convey it quickly, otherwise it looks fake.” He added, “Perhaps it’s true that I am not very emotional in life. At least the drama scenes like they happen in, say, Amar Akbar Anthony, don’t happen with me.” 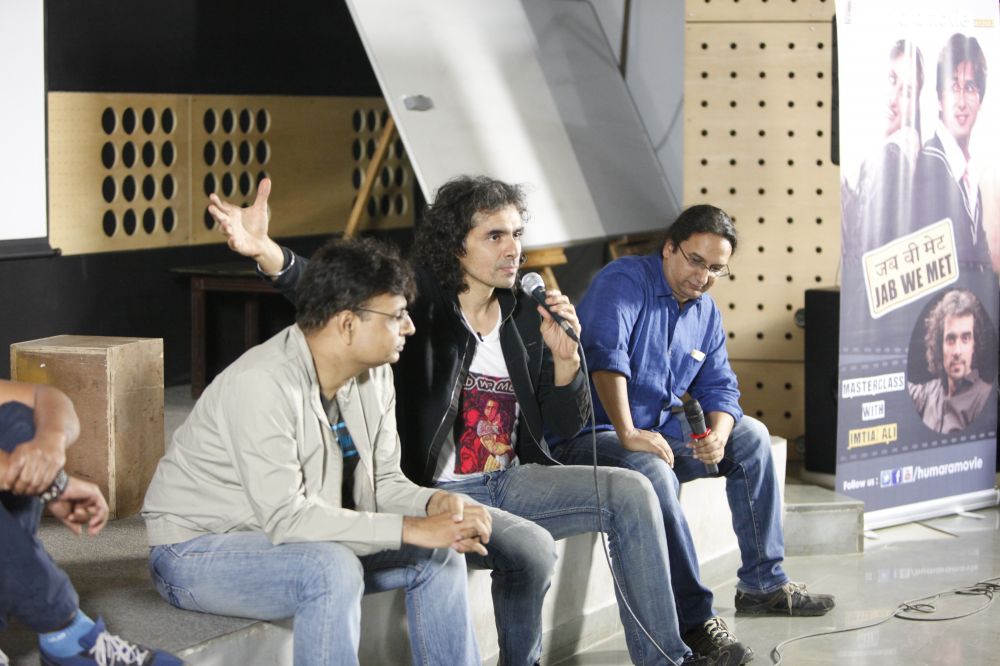 It has been nine years since the film released, and Imtiaz admits that the memories associated with the film are a little fuzzy today, like an old friend he once knew.

When we asked Imtiaz how it was for him to go down the memory lane, he said, “Looking back, it doesn’t seem like I had written those lines. Nor do I remember giving instructions to the actors. I felt like I am going to meet a friend called Jab We Met who I knew very well but isn’t with me anymore. I have spent the least amount of time making this movie. The film has given immense happiness and positivity to some people — and it has definitely given me some positivity at this point in life.”

While the film achieved cult status after its release; Imtiaz reveals that he wasn’t very convinced about Jab We Met’s success. He says, “I thought Jab We Met was a thin story, I was never confident of the film when I was writing or narrating it. People refused to be a part of it. When I was shooting for Rockstar, people who didn’t know my name, always called out to me as ‘Oye Jab We Met, Jab We Met!”

There are a lot of people in the industry who say “Arey aap yahaan ghoom rahe hain aapse toh Shahid Kapoor milna chah raha hai.” They may have said the same to Shahid. So I got this feeling that Shahid wants to meet me and he got this feeling that I want to meet him. We met and we were looking at each other and then I realised I had to give him some script.

Irshad Kamil on the song Nagada:

I had written the entire song but the word Nagada was coined in the studio while the song was being recorded.

Imtiaz asked the audience if they have shared an interesting relationship with their co-passengers while travelling in the train. A few people stood from the audience and shared their experiences. Imtiaz later said, “I also happen to be one of them.”

Vinay Mishra co-founder of Humara Movie said, “Humara Movie is a kind of largest development lab in India, it has worked close to 200 aspirational filmmakers, some of them extremely talented and some of them on their way to becoming talented and hopefully becoming popular. If you look 10 years back, Imtiaz was in a space where he was trying to make his first movie. All of the filmmakers are with us in that space. The intention of this exercise is to expose them to somebody who has gone through that journey and understands the process as well as the hard work, which went into it. Jab We Met is an important film, having gone through the clutter, there are things which have been treated so well and differently, less melodrama also by some estimates it’s the most watched film in India in the last ten years. We are going to do this as a series with such films, going forward. Hopefully we will do it once a month. It will have a similar set-up."

The session had a quiz session in between and there were many budding writers and filmmakers who confessed their love for Imtiaz and his films. The aspirational filmmakers answered questions related to the script, the way it was shot, taking particular shots in discussion, technicalities involved etc. The three hour long session ended at 9 pm with the entire full auditorium full of people happily posing with Imtiaz.