Jaipur: Choosing to play down the intolerance debate in India, actress Kajol today said there are no such dividing lines in Bollywood.

"Our industry will always keep reflecting on what is happening in our society. It will keep on going and everyone is welcome. There are no dividing lines, no caste, no creed and no intolerance in Bollywood," she said on the third day of the ongoing Jaipur Literature Festival.

Filmmaker Karan Johar, a close friend of Kajol, had kicked up a storm with his remarks about freedom of expression being the biggest joke in the country on the inaugural day of the festival.

In recent months, actors Shah Rukh Khan and Aamir Khan too have landed in controversy for speaking up against the "growing intolerance" in the country.

Kajol, who has worked with both Shah Rukh and Aamir, refused to react on the backlash faced by the 'PK' star, whose controversial remarks had evoked criticism from many quarters.

"These days people seem to have become oversensitive. As public personalties it is our duty to speak well and correctly. I have always said my 'Mann ki baat' and it is no different now," she said. 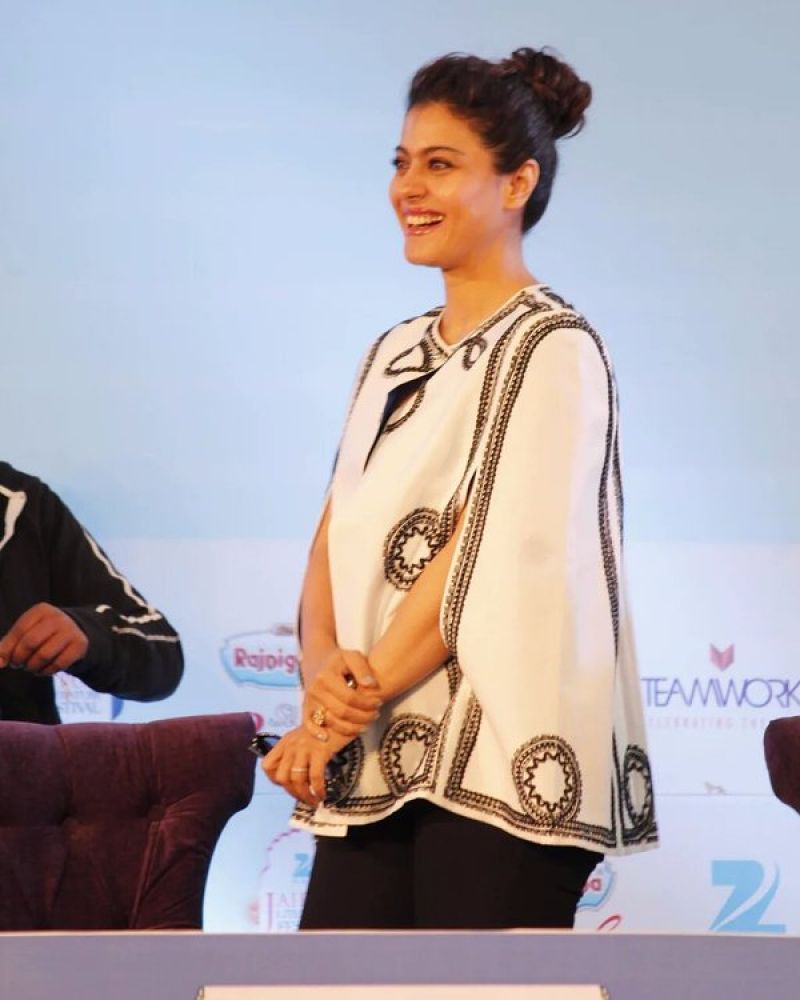 A voracious reader, Kajol, who was at the JLF to launch author Ashwin Sanghi's new book, "The Sialkot Saga", said she agreed to marry husband Ajay Devgan because he promised her a library similar to the one in the Hollywood film "Beauty and the Beast."

"I told my husband that I'll marry you only if you give me the Beauty and the Beast library. That was our love deal," she said at the cover launch of Sanghi's book.

The actor is often seen with a book between shots on the sets and she credited her mother, actress Tanuja, for inculcating the habit of reading in her. Tanuja was also in the audience.

"I don't remember a time when I didn't see a book around my mother. She had a 400 book library in her room right above her head. Even I have a library in my room, In fact, I have three libraries in my house," Kajol said.

Kajol, who was introduced to Sanghi's poetry by her mother, says the author's easy to read style was in fact very difficult to write.

"Easy reading is the most difficult kind of writing. I've read a lot if authors who've won awards but are bloody boring and very difficult to get through. I read not to become a smarter person but for the sheer pleasure of reading a book," she said at the Diggi Palace, the venue of the festival, which was packed with fans.

The actress also batted for publishers translating more literature in Hindi and other languages.

"A lot of books we read should be translated into Hindi and other languages. It's a travesty that there are so many people who cannot read a volume of literature because they don't know English," she said.

Sanghi said he wrote his first book, 'The Rozabal Line' under a pseudonym since he was fed up of rejections.

"I was a Guinness book record holder of rejections. I had been rejected 47 times. Then I had to self publish. There was a fear in me that I'm a lousy writer. And if they have to throw stones, they do it at Shaun," Sanghvi joked.