Sharad Pawar at a crossroads

In March 2014, a couple of months before the Narendra Modi juggernaut was to sweep the Lok Sabha polls, elections were to be held to  nine seats of Maharashtra legislative council. Nine MLCs were to be elected by the 288 MLAs. However, with 10 candidates in the fray, an election looked inevitable. But at the eleventh hour, then-Shiv Sena candidate Rahul Narvekar withdrew his candidature against the wishes of his party’s leadership, helping the remaining candidates get elected unopposed. The feat was pulled off by none other than Sharad Pawar, on whose instructions Mr Narvekar pulled out from the contest. That was the display of the Nationalist Congress Party chief’s clout in Maharashtra politics and his influence across parties.

In his five-decade-long career, Mr Pawar has looked invincible — until now. With just a month to go for the Assembly election, the Maratha strongman is facing the biggest crisis of his career.

It is not the case that Mr Pawar has not endured setbacks in the past. But even during those gloomy days, Mr Pawar had not lost his grip over state politics. Many political leaders across party lines revered him, and even more feared him. Not many wanted to cross the line with Mr Pawar, who would leave no stone unturned to downsize those who posed any threat to him.

In 1999, Mr Pawar ensured Prithviraj Chavan’s defeat in Karad after the latter refused to join the NCP. Even nephew Ajit Pawar has faced his uncle’s wrath, when he was trying to assert his authority in the state unit. In 2012, Ajit resigned from the state Cabinet amidst allegations of corruption. Other NCP ministers also tendered their resignations in solidarity. But Mr Pawar rejected all resignations except for Ajit’s.

Things look totally different in 2019 as several NCP leaders have quit the party to join either the BJP or Shiv Sena. An upset Mr Pawar has publicly lashed out at the “traitors”, but the exodus has continued unabetted. 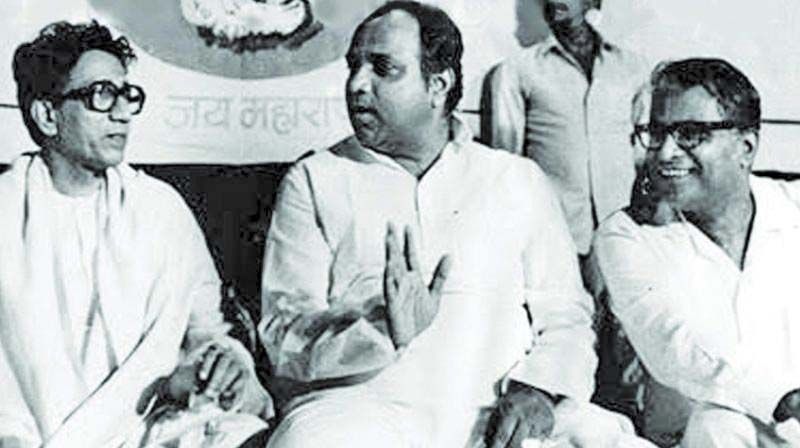 Sharad Pawar, seen with Thackeray and George Fernandes, is known for his rapport with other leaders.

Udayan Raje Bhosale, Shivendra Raje Bhosale, Jaydutt Kshirsagar, Madhukar Pichad, Rana Jagjitsinh Patil, Bhaskar Jadhav, Sachin Ahir... the list is long. In all likelihood, the NCP will not be able to recover from the exodus and may plunge to an all-time low.

The NCP has major weaknesses, which remained unexposed while the party enjoyed power for 15 years, immediately after its inception in 1999.

Firstly, the party has a weak grassroots network as cadres are loyal to their satrap and not to the party. Even Mr Pawar tried to address this issue, telling party cadres to seek inspiration from Shiv Sena founder Balasaheb Thackeray, who had built the Sena from scratch. But complacent leaders made no sustained efforts to strengthen the party network. Secondly, the NCP has remained a Maratha-dominated party despite Mr Pawar’s social engineering efforts. Although the NCP has OBC, ST, Dalit and Muslim leaders, it never managed to reach out to non-Maratha communities on its own, always piggybacking on the Congress and RPI factions for Muslim and Dalit votes. Thirdly, the NCP gradually became a dynastic party. 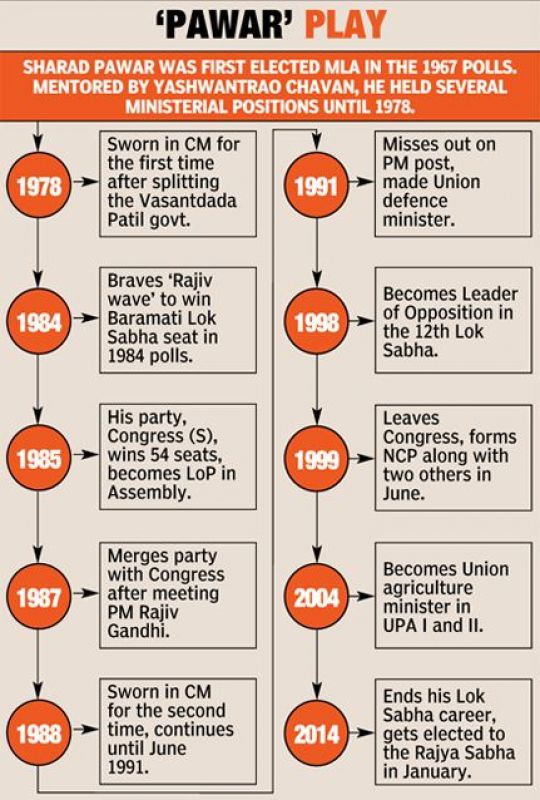 Ajit and Supriya Sule started competing for the number two position in the party, leaving behind several seasoned politicians like Chhagan Bhujbal. And now, the third generation of the family has entered electoral politics.

The mass exodus from the party has exposed NCP’s weakness even more viciously. Outside the Pawar family, the party has very few old guards, who could go to the masses and campaign. The few who can, including Ajit Pawar, are facing serious corruption inquiries.

During its political yatra in August and September, Dhananjay Munde and Amol Kolhe — the former had quit the BJP in 2013, while the latter had switched from the Sena before the 2019 Lok Sabha elections — were the NCP’s star campaigners.

The forthcoming Assembly elections appear to be a battle already lost for Mr Pawar and his ally Congress. In the 2019 Lok Sabha elections, the BJP-Sena combine polled 51 per cent votes as against 32 per cent votes polled by the Congress-NCP alliance. The saffron alliance led in 227 out of 288 Assembly segments while the Congress-NCP achieved the same in only 45 Assembly segments. Going by the numbers, the Assembly election would be a no contest.
However, a closer look at the post-Lok Sabha situation would reveal that all is not lost for the alliance.

The BJP-Shiv Sena alliance has not yet been finalised. If the alliance fails to materialise, the Congress and NCP are bound to make some gains. Moreover, the alliance between the Vanchit Bahujan Aghadi and the All India Majlis-e-Ittehadul Muslimeen, which had damaged the prospects of the Congress-NCP alliance in at least seven Lok Sabha seats during the general election, has also broken down. Both these factors would certainly help the alliance improve its vote and seat share.

However, the alliance would be able to put up a spirited fight only if the two parties contest as a cohesive unit. Internal bickering has always haunted the Congress-NCP alliance since 1999. Most of the  blame for this lies with Mr Pawar, who faces a trust deficit.

He is considered a leader who can switch loyalties any time and trick even his own party leaders. Now, Mr Pawar is at  a crossroads where the Congress is his only ho-pe to resurrect his political career. If Mr Pawar fails to bury the hatchet with the grand old party, October 24 — the day of the results — could well mark his political demise.