On September 15, Maharashtra chief minister Devendra Fadnavis, while touring Pune as part of the Maha Janadesh Yatra, spoke to reporters: Wherever we go, the yatra is being welcomed by people and getting a huge response. Looking at the people's support, we are sure that we will get an unprecedented victory in the Assembly polls.

Mr Fadnavis’ words may read as just another statement by a politician seeking re-election. Only that it probably wasn’t. For the first time in nearly four decades, the Assembly elections seem to be a tepid affair. So much so that the chief minister has already called it a “mere formality”.

There seems to be some truth to Mr Fadnavis’ claim too. The Opposition is in total disarray after a series of high-profile defections to the Bharatiya Janata Party-led saffron alliance, which is buoyed by the massive mandate in the 2019 Lok Sabha polls and the popular move to abrogate Article 370.

The upcoming election, in all likelihood, is more about the number of seats the saffron alliance would end up winning than anything else.

The BJP has already declared its intention to win at least 220 out of the 288 seats, also coining the slogan abki baar, 220 paar (this time, 220+ seats). Some like Union defence minister Rajnath Singh have urged cadres to aim for a whopping 250 seats – something even ally Ramdas Athawale believes the alliance can win. 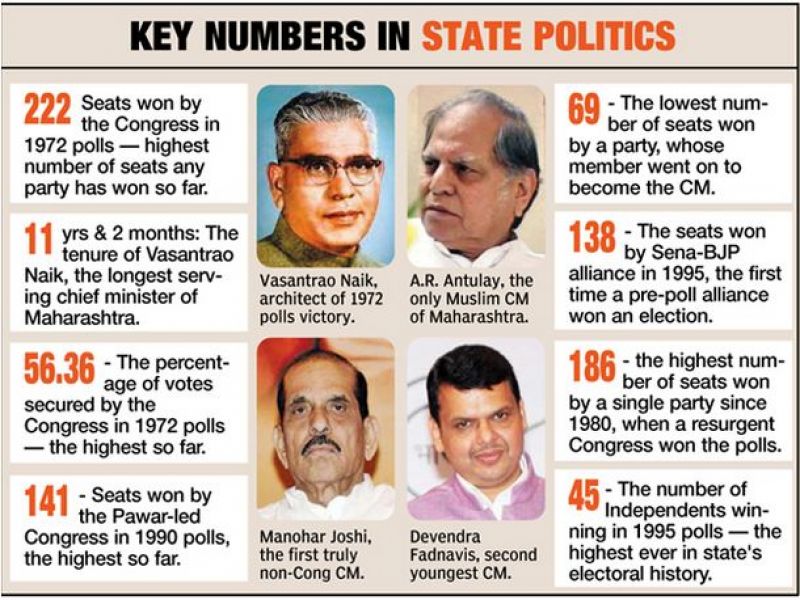 Be it 220 or 250 seats, considering that the poor state of the Opposition and the buoyant mood in the saffron camp, anything less than 200 seats could prove to be an anti-climax on October 24 – the day of counting.

‘Unprecedented victory’ would create new record
Mr Fadnavis, who has been projected as the CM face of the alliance, is on the cusp of a once-in-a-lifetime opportunity to shatter electoral records in the state.
Since the coalition era began in 1995, no party has been able to cross the magic figure of 145 seats on its own. The closest any party came to achieving it was in the 2014 polls, when the BJP won 122 seats in the Assembly.

In fact, in 1999, 2004 and 2009 polls, the Democratic Front alliance, comprising of Congress, Nationalist Congress Party and smaller allies, could barely cross the halfway mark. Same was the case in the 1995 polls, when the victorious saffron alliance fell seven seats short of the majority.

After fighting the 2014 Assembly polls separately, Sena eventually joined the BJP-led government. Their coming together led to the strongest government in the Assembly in over three decades, with the two parties along with the Rashtriya Samaj Paksha occupying 186 seats.  Interestingly, the 2014 tally was identical to the Congress’ tally in the 1980 polls – the highest in the last four decades.

However, the BJP-led alliance would be able to register an “unprecedented victory”, as envisioned by the chief minister, only if could equal or breach the 222 seat-mark. The number 222 has an electoral significance in Maharashtra politics, as Vasantrao Naik – Maharashtra’s longest-serving chief minister – was able to win that many seats for the Congress in the 1972 polls. Since then, no party has been able to win over 200 seats.

Given the compulsions of coalition politics, the BJP may certainly not be able to win over 200 seats on its own. However, there lies a great chance of the party crossing the 222 seat-mark with its ally, the Sena, and securing that “unprecedented victory”.

If Mr Fadnavis succeeds, he could end up becoming the most successful politician from Vidarbha since, guess who, Naik.

Sop opera for a welfare state

The mindset game: An officer isn’t always a gentleman

The mindset game: An officer isn’t always a gentleman

Section 144 of CrPC: Brutal tool has no place in democracy

Internet saga and the Indian state